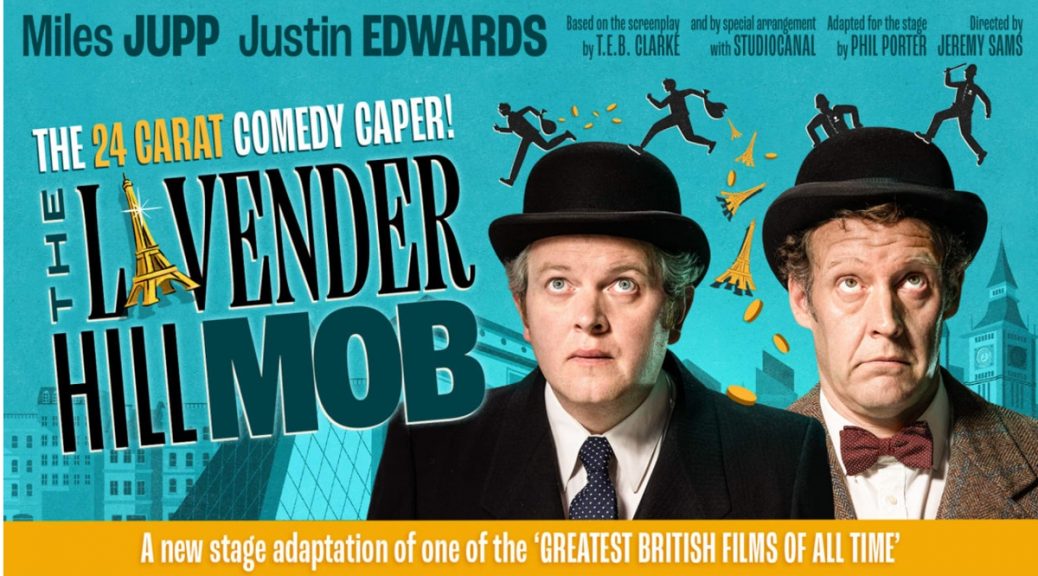 There’s nothing quite like that Ealing feeling: the slew of indubitably British comedies that raised the spirits of postwar Blighty. There’s misbehaviour, yes – Kind Hearts and Coronets, for one, has more deaths than an episode of Game of Thrones – but it’s all done in a rather genial fashion. In Ealing comedies, hoodlums don spiffy suits and jaunty bowler hats, and stop to wish you a good day after they’ve mugged you. This is the spirit which infuses the new touring production of The Lavender Hill Mob, widely considered one of the finest British films of all time, which performs at the New Theatre in Cardiff this week.

Directed by Jeremy Sams and adapted from T.E.B. Clarke’s 1951 screenplay by Phil Porter, The Lavender Hill Mob follows Henry Holland (Miles Jupp), an unassuming bank clerk now living like a king in Rio. His unlikely rise has inspired a film director (Guy Burgess) to put Holland’s story in the movies – leading Holland and his entourage to re-enact the tale with much theatrical aplomb. It’s as funny as you might expect from a show which is led by two proud alumni of The Thick of It, with Jupp channelling Alec Guinness’ breezy RP charm and Justin Edwards doing an uncanny evocation of the great Stanley Holloway as the befuddled Pendlebury.

Holland’s friends are played by Tessa Churchard, John Dougall, Victoria Blunt, Aamira Challenger and Tim Sutton, with much of the laugh out loud moments coming from their playing of multiple of roles, each one more chaotic than the last. There’s a car chase in Calais, a mad dash through London, and the iconic scene on the Eiffel Tower (on whose novelty souvenirs the plot hinges).

While the heist never quite reaches the comic heights of its original, it’s a consistently amusing and well-played caper, with all the charm of its classic counterpart. For fans of modern comedies like The Play that Goes Wrong, it’s a night of fun and frolics – with The Lavender Hill Mob, you’ll be in criminally good company.

The Lavender Hill Mob is playing at the New Theatre Cardiff until Saturday 5 November. For more information and to book tickets, click here.