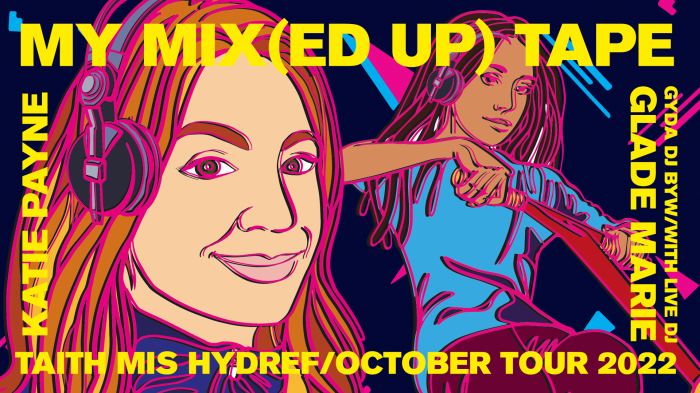 I have to say I wasn’t sure what to expect on a rainy Welsh Wednesday in an ex-working men’s club in Maes Y Coed, Pontypridd. It’s not your usual venue for a bit of theatre, but Pontypridd-born Katie Payne (accompanied by live DJ Glade Marie) took the small, buzzy audience on a rollercoaster ride through the memories and present-day happenings of character Phoebe Phillips. I haven’t always connected with plays written about Valleys characters. They can be a little over-done, a pastiche or caricature of a romanticised myth that can be sickeningly saccharine at times. But this evening’s performance exploring what it’s like to be in the orbit of an ADHD mind was quite possibly one of the best and most relatable depictions of Welsh working class Valleys women I have seen on stage.

Phoebe is uncompromisingly, restlessly real.  Painfully and honestly so. We skip back and forth between memories and songs and scenes from her childhood, thorough messy confrontations, and the myriad of relationships with friends, families and foes. Valleys folk will all recognise the characters who pop up in ‘Duffy’s’ (but really, this was as true for me of Tonyrefail, just up the road). You’ll meet “Bag-face Linda”, the bouncer with the spade arms, “Pick Me” Caroline, sweet/spiteful Alex and Jamie bloody Richards – the lad’s lad you love to hate. There’s a constant drum beat of frenetic energy brewing from the very beginning, building up to a crescendo of chaos that gets better and stronger as the performance reaches the summit.

As a family currently on the waiting list for an ADHD assessment and with suspected neurodivergent traits of our own, this really did hit home. My teenage daughter said she thought it was written about her. I thought it could have been written about me, too! The play explores the turbulence of having emotions that are always brimming just below the surface and the ensuing fireworks that leave a host of disappointed faces in their wake. Throughout, main character Phoebe navigates the stigma and grief associated with never ever feeling good enough and of living inside your own head constantly.

ADHD presents differently in girls of course, and while many ADHD girls perhaps won’t be as disruptive, energetic and borderline violent as Phoebe, all will recognise the panic of being exposed and ‘found out’. There’s a gendered level of shame to confronting and owning anger and the end scene where Phoebe lets her guard down with boyfriend Ben was like a punch in the gut. If it’s exhausting to be with me, imagine what it’s like being me, Phoebe says. But the audience instinctively see that there should be no shame in her realness. There is, in fact – power in her drive, her hyper-focus, her silliness (the beautiful scene where she curls her lip and cuts through the conflict with a single facial expression is sheer perfection).

I asked my daughter how she felt after the show. “I feel seen” she said…

Neurdivergent or not, this is an absolute must-see. Katie Payne is not only a sharp writer and a gifted performer, but she absolutely NAILS the working class experience of growing up in the Valleys. Throughout this show, there are nostalgic references, witty one liners and great little cameo voices from relatives and members of the wedding party who depict the humour, the claustrophobia and often – the sheer absurdity of the Valleys experience. Sometimes, the stifling yet gripping hold ‘home’ can have on you can be discombobulating. As Phoebe did during Caroline’s wedding, you confront your past, your weaknesses and your failures. TH Parry Williams the North-Walian poet described “home” as being like a dragon’s claw gripping your heart and riffed about resenting the folks you try to leave behind. But in true Welsh “Hiraeth” fashion, you may feel an inexplicable sense of disconnect or loss when you move away. For those of us who were lucky enough to grow up in the Valleys, though, My Mix(ed up) Tape makes coming home to Duffy’s feel like a big warm cwtch. You may feel like you’ve been punched in the feels, but my god – you will bloody laugh, mun.