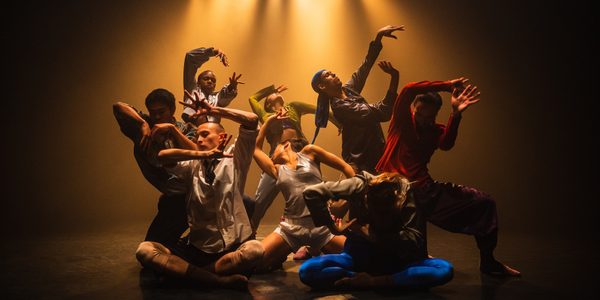 The eight performers performing in Contemporary Dance 2.0 from Hofesh Shechter and his award winning company Shechter II, were; Tristan Carter, Cristel de Frankrijker, Justine Gouache, Zakarius Harry, Alex Haskins, Oscar Jinghu Li, Keanah Faith Simin and Chanel Veyent. They are sensational, adapting perfectly to the Shechter style, which is one minute smooth and sinuous as silk and the next pulsing to a frantic beat of rapid, exhausting movement, as relentless as a heartbeat.

Each dance piece gets divided into five sections, which were signed by the dancers holding up rough cardboard. It begins, with my all time favourite ‘Pop’, with Michael Jackson inspiration posing, followed by ballroom, frantic, electric jumps & contemporary dance moments of joining hands and forming multiple, beautiful dance stunts & visual images.

Freedom of expression through sensory movements were expressed by all eight dancers’ synchronised & projecting an aura of internal power through pop dance, feelings of motherhood and pain/relief experienced by our bodies channeling energy in complex journeys. Seductively taking eyes across the audience as their bodies effortlessly & vigorously flop and rise with their fluidity hypnotised, leaving you mesmerised to the depths of how pop culture, embodying Michael Jackson – the King of Pop’s symmetrical famous moves.

The music was upbeat. In beat we witnessed a fusion of dance styles such as krumping, popping, electro funk gliding to the counts within the music flow that went to the rhythm of 1,2,3,4 – however, automatically speeding up to match their heartbeats drumming to the beats 2,4,6,8. This soon boomed to a higher frequency as they began spinning, break out dancing and exploiting various other dance sensations like ballroom & contemporary thanks to the Israeli choreographer Hofesh Shechter.

Each dancer colourfully dressed visually moved our brains as their facial expressions epically motioned feelings of strain, reactions of excitment & vanity. You could feel the dancers’ hearts race, pumping to the counts of 10, 20, 30, and 40.

A 50 minute non-stop fusion of intensity taken to the stage. Hope was their supply, influence was their leader, precautions were their discipline, and spirit guided was their teacher. Flexible bodies slid springing along the floor; resonating solitary on stage, the lights set the mood remaining predominantly dim lit.

Well incorporated into the dance moves were light bouncing, embracing, smiling, culture, architecture of hearts rejoicing, as their bodies sprung like tigers. Towards the end played ‘The End’ by Frank Sinatra. It became an expression of unity and life between the past and present of home manifested through pop, hip hop & other dancing styles high on energy, moving to a completely different beat working strangely well, appearing extremely beautiful towards the end.

The music consisted of heavy deep drums and heartfelt string instruments. The ambience was uplifting as it radiated emotions of tranquillity, hope, victory and a full tribe of life. Each dancer individually performed a solo as themselves, which conveyed their stamped identity. Towards the end all moves moulded into one! A high off of energy, fire and enjoyment, zero stopping until the stage was cleared making you want to watch forever. Not to be missed!

Contemporary Dance 2.0 will be at Battersea Arts Centre, London, until the 29 October.