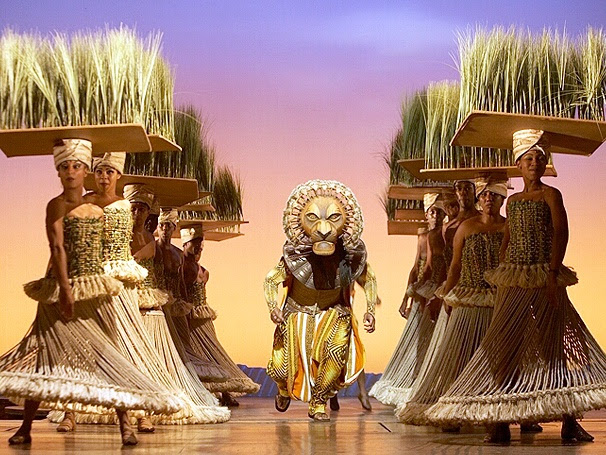 The outstanding Lion King musical has returned to Cardiff this summer.  The Serengeti of Africa was transported to the Wales Millennium Centre.  It brings warmth, light and darkness, with an emotive contemplative story line, and fantastic rhythms and lyrics.

The Walt Disney animations studio created  The Lion King feature film back in 1994.  The Lion King musical, which is based on the original animated film,  made its first debut in 1997, in the state of Minnesota in the United States of America. In 1999, it was opened in the U.K. at Lyceum Theatre, and has been running ever since.

The story follows Simba’s journey from a cub to an adult lion, becoming  the King Lion.  Simba is the son of Mufasa and Sarabi, and his jealous uncle Scar kills his brother Mufasa, blaming Simba, and as a scared grieving cub he is forced to run away.  Timon (Meerkat) and Pumbaa (Warthog) come across Simba, and they grow up together. The Pride Land in the mean time, is suffering under Scar and the hyenas reign.  Nala, who was Simba’s best friend as a young cub, is now grown up, and  while out hunting she is reunited with Simba.  Simba’s confusion on whether to go back is helped by a spiritual meeting his dad Mufasa. Simba returns, the truth is out who really killed Mufasa, Scar falls to his death, and now Simba is the rightful descendant King of the Serengeti pride land.

The classic songs “ Hakuna Matata”, “Can you Feel the Love Tonight?” and “Circle of Life” by Elton John and Tim Rice feature in the musical.

There are a few song additions that don’t feature in film version, such as “Grasslands Chant” and “One by One”.

In the musical Rafiki, who has a narrative role, is played by a female. It was decided this as production felt it needed another stronger leading female role.

The hyenas, although dark and scary, have a comedic side to them alongside Scar, and of course not forgetting the jokes from Timon and Pumbaa, and Zazu (Hornbill).

The cast ensemble play absolutely incredible roles, from different animals, to dancing grass features. The super creative costumes, alongside the fantastic choreography, bring the auditorium to life. Performing not just on the stage, but in with the audience too. This gives such an immersive interactive experience.

My children who came along with me, age 11, 9 and 4, had their mouths wide open in awe of them, and couldn’t stop smiling. It really adds to the experience, and I got this warm magical feeling inside. We loved how the percussionists were positioned in the side boxes of the audience.

One thing I did notice with the performance I watched, I felt the volume needed to be increased as I felt it had reduced sound. I did question whether  it was a relaxed performance because of this, but it wasn’t.

The first act seemed to be significantly longer than the second act. My children did start to fidget slightly towards the end of the first act and ask when they could get a drink and use to the toilet.

On a personal note, The Lion King musical has always had a play in my heart and in my top 10 musicals of all time! I enjoy the storyline along with African musical rhythms, inventive vibrant costumes and artistic set design.

The Lion King was also the first ever  live musical theatre performance my son at age 3 watched in Cardiff back in 2014.  He has been hooked on musical theatre ever since, and has a CD collection of soundtracks from the musicals he has seen since.

It’s certainly a musical for all the family.  Guidance is from 6 years plus, and no under 3’s.  It was approximately 2 hours 30 minutes long with a 15 minute interval.

It has to be said the whole cast and crew are incredibly talented.

You can book tickets here