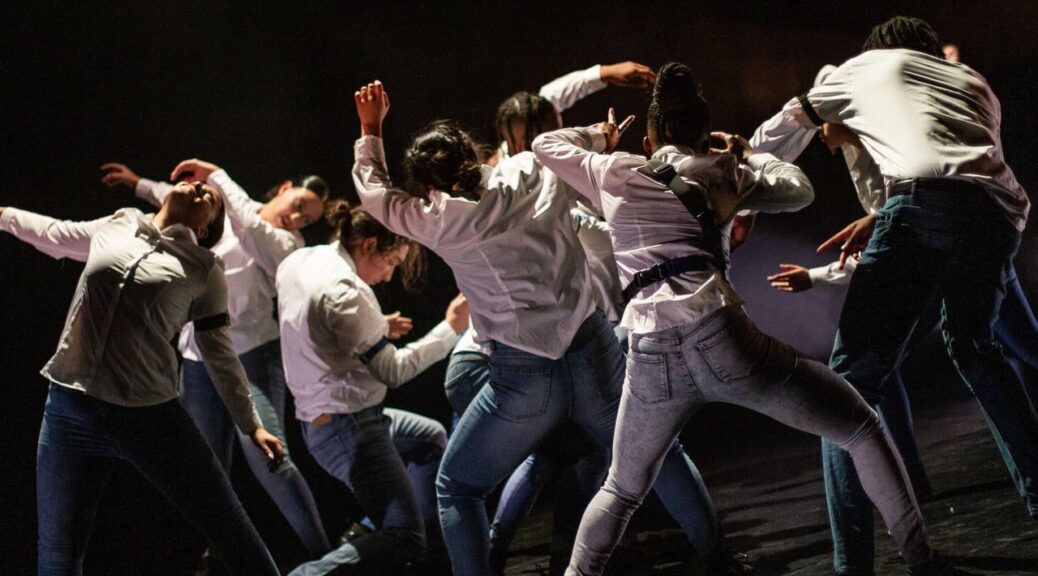 A hectic Saturday, along with tube strikes would herald a invigorating day of theatre in London. Kings Place has been itching to do their Noh Theatre festival since pre-pandemic times and with two days filled with events, I was only able to make Sumida River in Sign Language. This inclusive show, based on an old Japanese play of the Noh tradition, would welcome both deaf and hearing audiences. The lead roles were taken by Deaf performers who signed in their respective languages of JSL (Japanese Sign Language) and BSL (British Sign Language) with voiced translation in English.

The tale itself is quite simple: a Ferryman (the fitting stature of Brian Duffy) refuses to let The Mother (the elegant Chisato Minamimura) pass the river so late at night. The story of a child who drowned in said river permeates the story, having been kidnapped by bandits and was fleeing in the process. The theme of the after life and the never ending flow of nature are the main elements of the piece, here even more distilled in a often calm, sometimes heightened drama. Percussionist Beibei Wang used all sorts of instruments, big drums to make us jump out of our seats, little gongs and even the floors and seats of the auditorium.

Most interesting was the use of both British and Japanese Sign Language, the Ferryman not able to grasp what The Mother means, with her insistent waving of her hand, her index and thumb together like the okay symbol. Being a lover of the dense practice of Noh, this was more accessible for both deaf audiences and for those unsure of the art itself. The strict posturing and lapping dialogue in the traditional pieces take time to unfold over you. Director Verity Lane should be praised here for her efforts, along with the cast including Elizabeth Oliver as the English voiceover and the plush costumes of Mirei Yazawa.

A venture over to the Peacock Theatre saw the barnstorming talents of Impact Dance. Starring the legend Hakeem Onibudo, some 26 years of discovering dance talent in London (and beyond). He isn’t known as Mr Impact for nothing.

It was the sheer talent on display from all these young dancers that was highly impressive. Each of these groups offered some neck breaking, animated moves, something you wouldn’t think the human body could do in such quick succession. The diverse nature of the inclusion would see Impact spread out to Reading and Birmingham. I was off course delighted to see Fusions Elite, a troupe from Cardiff grace the stage, a welcome reminder of home on this trip away.

Many of these pieces had a certain mood, either jubilant, yearnful or furious. It’s that violent body popping I just cant get enough off! A retro cut of musical choices would see the delights of dubstep, a mass of hip-hop, The Pet Shop Boys, The Lion King and more. A breathtaking dance from Samuel da Silveria Lima, who came from Brazil to perform, proved that any one can dance.  An appearance from Botis Seva, fresh off the success of BLKDOG, ended the guest artist programme in a typically evocative and strident target on violence in today’s world.

Seeing all this come together and the response from the audience to Hakeem’s lifetime of work was very touching. I’m in it for the journey now and want to see more.