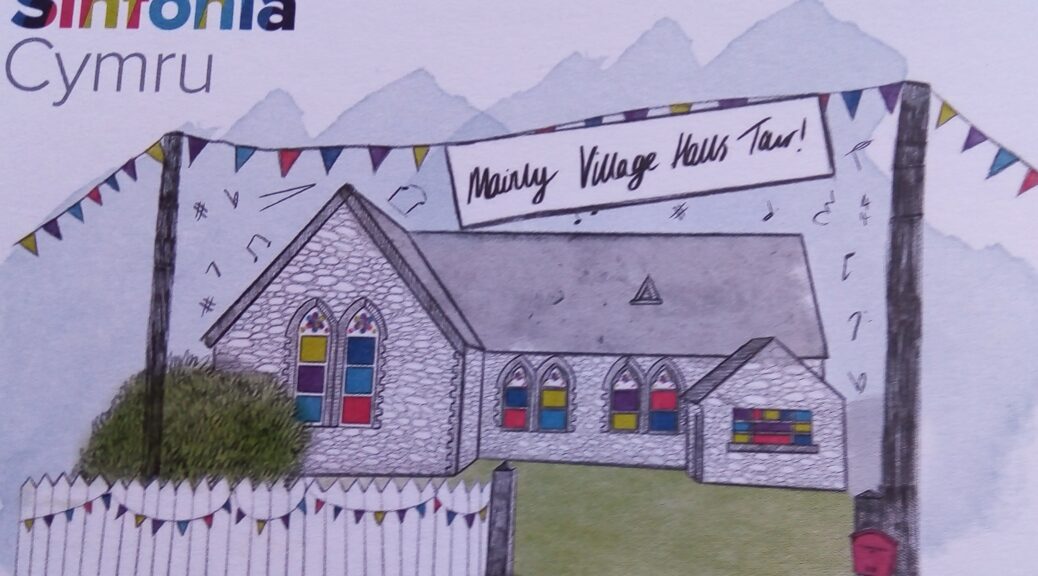 Air on a String Quintet

Thinking back to a musical interlude at school – an “Ensemble at Assembly” was something to be reckoned with in the “Big Hall” at that time. Ancient tunes and solemn characters with frameless glasses prised onto long noses frequently moving as the notes went higher; earphone bun styled hair (before Princes Leia of “Star Wars”) withering looks from the Head Mistress as we, as pupils, were a captive audience and could not move.

Sinfonia Cymru erased that memory, as the brilliant graduates began their tour of Village and Community Halls entertaining with their free music concerts, giving of their own time performing in Mid Wales (String Quartet), the Valleys and South Wales (Flute, Clarinet, Oboe, Bassoon and Horn),  West Wales (Four Cellos) ending with concerts in North West Wales (Harp Flute and Cello). Sinfonia Cymru are the UK’s leading professional under thirty orchestra. Their concerts are around 50 minutes with a mix of music with something for everyone

In the middle of May it was the turn of the Valleys area of South Wales and their first visit to the only remaining Miners Welfare and Institute in the Rhondda Fach, namely Tylorstown Welfare Hall. It was an informal musical intermission with Sinfonia Cymru, represented by five talented graduates namely

A Wind Quintet of gifted flair accompanied by the richness of their musical instruments played with distinction.

The acoustics of the Welfare Hall enlivened the rumbling Sea Shanties which set feet tapping along to the rhythm of such as “What Shall we do with a Drunken Sailor?” Dedications to various composers including Malcolm Arnold. A musical “race” staged between each performer as they rushed to win the accolade of finishing all together. The classics were there with Tchaikovsky’s “Dance of the Sugar Plum Fairy” from “The Nutcracker” alongside “The Flight of the Bumble Bee” which had the audience humming along in unison, helping to produce a honey of a rendition. Monet’s “Water Lilies” painting inspired musicality with the finale being a mix of Latin American and Jazz originated from the composer Bizet’s opera “Carmen”

It was a musical journey on a tide of chilled relaxed memories.

Afterwards there was an opportunity to talk with the members of the String Quintet, and their Chief Executive Officer Peter Bellingham.

If you get the opportunity when Sinfonia Cymru are on tour – catch up with them and enjoy their creativity and versatility.

AR HYD Y NOS   All through the Night

On Thursday, 30 June Sinfonia Cymru will be performing at the Royal Welsh College of Music and Drama (RWCMD) in Cardiff from 7.30 pm

On Friday, 1 July Sinfonia Cymru will be at Pontio in Bangor from 7.30 pm

Both performances are a collaboration with celebrated artist, poet, and singer Casi Wyn inspired by Welsh culture, history, people, and landscape.