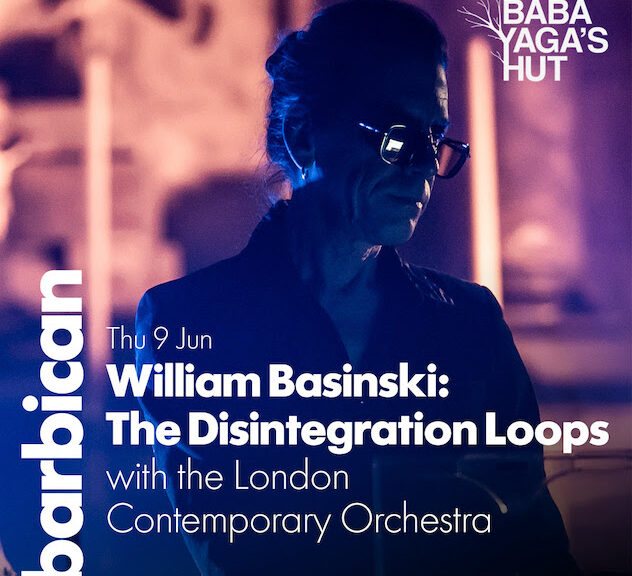 A return to London for William Basinski was just what I’ve needed. This American composer has made good old fashioned reel to reel tape as the basis of his craft. More specifically, the deterioration when the tape is compromised due to a varying combination of factors is his USP (chance, the age of the tech and temperature as examples). His art will be forever interlinked with the events of 9/11, as some attempt to salvage archival work occurred on that fateful day.

Arriving on stage, Basinski was flaming, singing show tunes and unable to grasp he was performing at the Barbican. Starting with his Lamentations from 2020, he declared that “war is on the way”, as the now everywhere colours of the Ukraine flag flooded the stage. Even in this newer work, his tape addiction never stops. There were some exquisite moments here. Anyone not into minimalism and an equal amount of patience would struggle with his ideas. Though those who commit are treated to a fine ambient encounter. Some sample of a stunning female singer makes you crave the source. It remains very haunting, other exuberant moments fill the space with a somber joy, yearning regrets within others. He appears to still have the magic about him!

Two orchestral arrangements of his Disintegration Loops filled the second half. Basinski has shared the context of this piece and it’s relationship with 9/11 many times. The London Contemporary Orchestra took on these damaged pieces with benevolence for the listener. No. 3 of the loops is quite serene, a feeling of calm washes over you, as it continues to repeat and repeat. Conductor Robert Ames helps the statue like dynamic along, leading shortly after in the iconic No.1.1 of the loops. There is a slight change to the snippet of a melody which haunts the first loop (we assume it’s brass on the original). The brass here players keep the structure going, as the notes gradually go into the ether. The two percussionists relentlessly shone, keeping the subtlety on course, as the other musicians wrapped up. The addition of humming was a nice touch at the start and end, though mics would have gone a long way.

All that was missing was Basinski’s video work which accompanies the loops. Still a fun, revelatory evening.