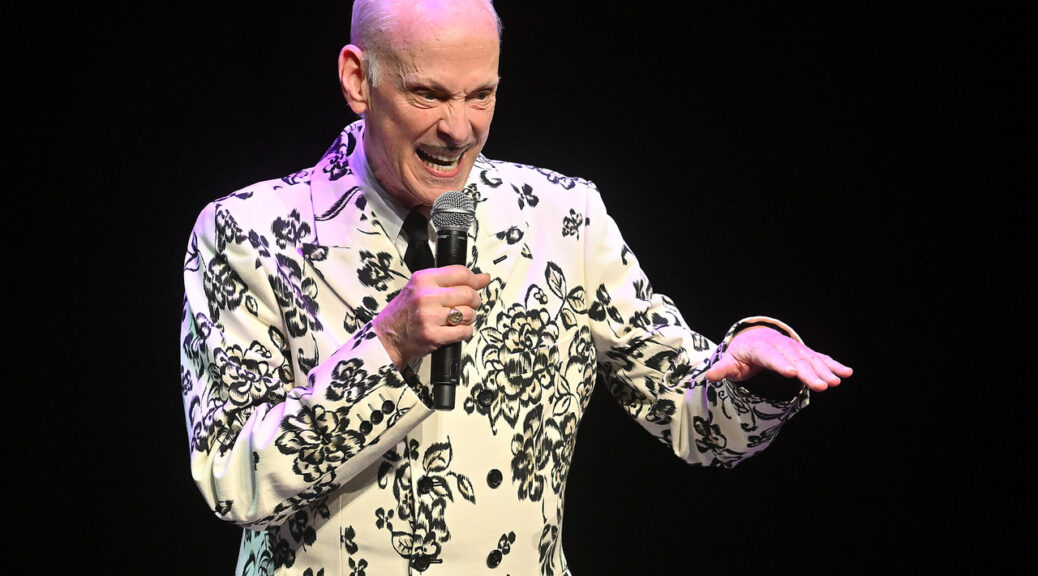 Dubbed “The Pope of bad taste”, anyone who has ever seen a John Waters film (I’m talking about the early stuff) will never forget it, try as they might! With this notorious reputation, John aged of 76 finally written his first novel: Liarmouth. I get the feeling he has done his live show just to do a shameless plug, the queue after the performance was a long as the Barbican is a maze. No doubt he would never take offence to any of my words.

His film work is a revelation, a huge point of reference for the LGBT community, even with the tidal wave of problematic themes and subplots. The giddy air at the Barbican greeted John with huge burst of loving applause, arriving in a bold, yet fashionable floral, black and white smock (something I adored). Of course, he had his famous, pencil moustache to boot. It’s the insights, the references, the name dropping and the snarling comebacks that made this live experience an overwhelming gush of camp. The spirt of drag artist Divine, John’s most infamous collaboration was ever present on this night. Divine, who may have been one of the funniest and brilliant people ever to be on film, also proved his chops with more acclaimed work of John’s with Polyester and the original incarnation of Hairspray.

I knew this would be funny and it was. I found myself scoffing as many times as I was amused, the compulsion of big, hearty laughs caught me off guard. More recent remarks about Covid, vaccines and even Johnny Depp (he worked with John on Cry Baby) stood out as highlights. The amazing thing about this man is he makes you love trash, through a mirror of irony and self confidence. No one really makes me feel like John, his openness and mockery of things he adores are proof that comedy can be funny and not always mean at the same time. You just can’t cancel him, try as they might. A frenzied Q & A proved how much adoring fans can’t get enough of him, John declaring on a few occasions “One at a time!” due to his poor hearing.

He declared that Liarmouth is the most outrageous piece he has done since Pink Flamingoes of 1972. That is saying a lot, but the book is now top of my list of must read books. Only I don’t think I’m quite ready for it…

Liarmouth, published by Corsair is now available online and all good retailers.