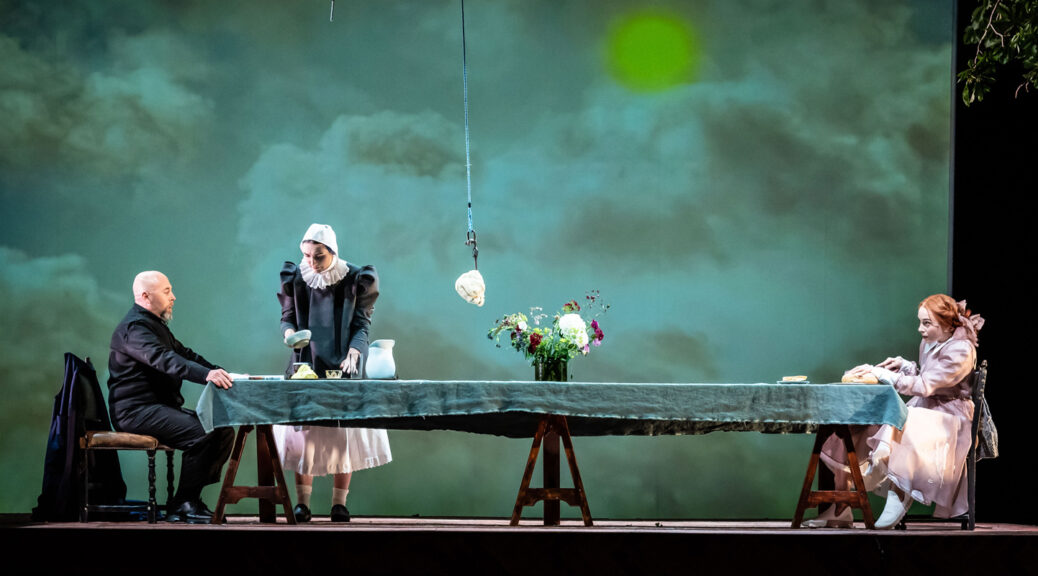 If the objective of art and performance is to encourage the observer to ask questions of both the piece and of themselves, then this production certainly does that. ‘Violet’ the new contemporary opera from Music Theatre Wales with music by composer Tom Coult and libretto by Alice Birch is both thought provoking and arresting.

Set largely in one room in a seemingly affluent household within a small village, the opera explores the concept of losing practical time daily and the impact this has on an individual and a society. The undeniable vocal talents of Anna Dennis as the main protagonist, Violet and her, at best fractious at worst toxic, relationship with husband Felix played by Richard Burkhard make for bitter exchanges fuelled by vitriol and spent passion. The libretto uses blunt truths and humour to articulate the harsh realities of a broken marriage, underscored by tones of misogyny and coercive control. The characters are not likeable and the musical score, performed brilliantly by the London Sinfonia orchestra echoes this jarring, uncomfortable feeling for the observer.

The vocal range of all the performers is incredible. Violet’s calm acceptance while those around her crumbled was portrayed by Anna Dennis with a serenity and almost childlike absence of concern that would have been welcomed by me as a viewer. The juxtaposition of Dennis’ piercing soprano and Richard Burkhard’s baritone was palpable and the shift in the balance of their relationship demonstrated to great effect through the peaks and troughs in tone and pace of the accompanying score. Frances Gregory as Laura the maid brings an understated yet powerful presence to the mix and Andrew MacKenzie Wicks as the clockeeper has an ominous presence throughout the performance, and acts as a reminder of the inevitability of time passing whether we want it to or not.  The music takes the audience on a journey through a range of sounds both familiar in the ticking of a clock and at times challenging and uncomfortable. What felt like a cacophony of sound at times, perhaps representing the confusion and uncertainty felt by the characters in their increasingly desperate situation, ultimately left me a little overwhelmed which may have been its intension.

Rose Elnile’s staging was minimal but effective and the mix of old and new meant that the action could have taken place years ago or yesterday, bringing the unnerving concept of the opera closer to home. The animated backdrop representing the outside world transforming from idyllic summer sky to a dystopian nuclear cloud with floating dandelion clocks was an interesting addition that prompts a conversation about climate change and taking notice of what is going on around us. The twist at the end of the performance, no spoilers, didn’t work for me as a viewer but it made for a discussion point that will divide opinion and interpretation.

Cécile Trémolières costume design was interestingly simple with Violet morphing from a ‘Baby Jane’ esque image at the beginning to something from the Famous Five at the end reflecting her development in confidence and independence. Violet’s costume was the only one with any real personality or individuality and this served to single her out as a dissenting voice among the masses.

Time as a construct and how we value or use it is subjective and divisive, I suspect this contemporary opera is likely to be the same. If you are new to the genre of opera as I am, this is certainly an interesting baptism. I’m still not sure if I liked it, but I was talking about it when I got home and that has to mean something.