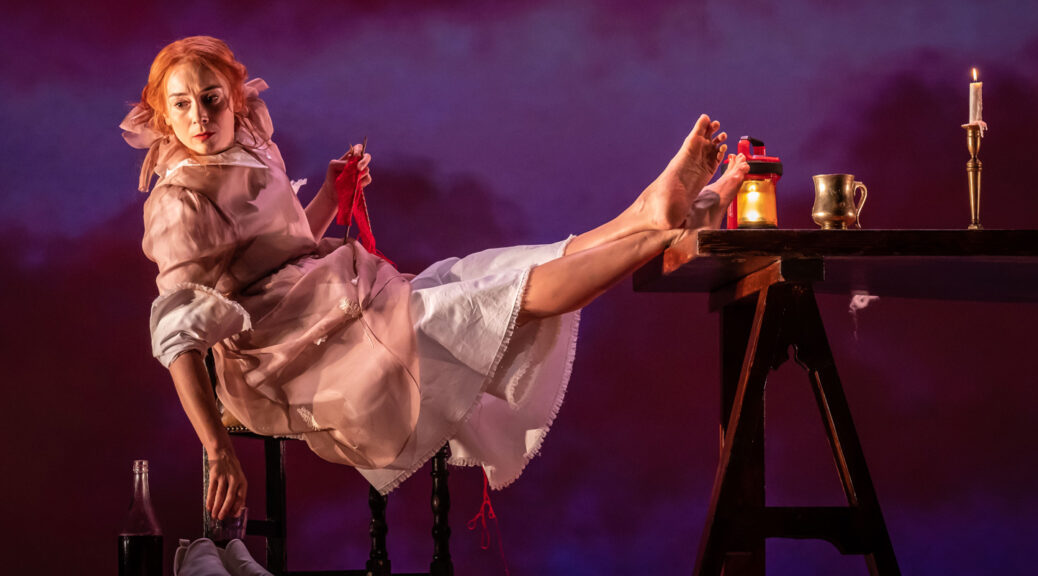 Contemporary opera may be an unfamiliar genre to many, even fans of musical theatre, and this was not in the background of Tom Coult or Alice Birch before they collaborated to compose and write ‘Violet’. Opera traditionally is not sung in English and is set in specific times and places as the protagonists, often lovers, work out their fate, usually tragic, as they struggle against the prevailing social and political conventions. ‘Violet’ is not a story of love seeking to prevail in spite of contrary circumstances, like Tristan and Isolde, La Boheme, Tosca or Madame Butterfly but more Nabucco, of emancipation from constraints to freedom, and lovelessness.

Co-Produced by Music Theatre Wales and Britten Pears, the premise of ‘Violet’ is bold and imaginative in the same way as Nick Payne’s ‘Constellations’ was when it broke new ground at the Royal Court Theatre in 2012, exploring questions about time, free will, choice and death. It is of time disappearing an hour per day over 24, disrupting the balance of nature and the orderly life. Set in an indeterminate historical period and place, the story relates the effect of famine, drought and human misery on the personal lives of the characters, the fourth of whom is the clock-keeper (Andrew MacKenzie-Wicks) whose chief function is to manage the display on the clock-tower stage-right showing the passage of time and the diminishing hours.

The dramatic narrative is set around the centre-stage dining table of a well-to-do couple, Violet (Anna Dennis) married to the controlling Felix (Richard Burkhard), supported by their maid Laura (Frances Gregory). Violet and Felix sit at opposite ends ( reminiscent of the distance Putin keeps from visiting world leaders) while Felix and the clock-keeper sit adjacent to each other for their conversation about stopping the disappearance of time, indicating Felix is more concerned with worldly affairs than any intimacy with his wife. The costumes designed by Cécile Trémolières support the narrative and character arcs, the static male characters remain in puritanical black while Violet’s attire changes to show more colour and variety as she comes to assert herself more, seeing hope and opportunity with the disappearance of the hours that she hadn’t before. To reinforce the lack of reference to specific time and place, Laura initially wears a maid’s bonnet suggesting this is provincial 17th century era but then the men don Elizabethan ruffs, and Violet kneads bread on the table between plastic milk cartons and supermarket cereal packets.

The backcloth shows a skyscape that changes as the hours disappear, from blue with white clouds to garish orange, purple and black intimating the arrival of catastrophe. As we hear how orderly life is breaking down, so too the props are thrown about, aided by Laura who finally smashes the table after a tree suspended above dropping lower every day is left fallen across the domestic wreckage. The staging by director Jude Christian and designer Rosie Elnile is riveting in its focus to assist the narrative, with visual text beneath the stage in Welsh and English as helpful assistance. A particularly effective piece of staging was the last occasion we saw the clock-keeper, up on his tower lamenting the end of time, lit from behind to show on the backdrop as if he was a hanged man. In view of Felix’ fate, this was a brilliant touch.

Moments in the Alice Birch’s libretto narrative I particularly liked were the conversation between Felix and the clock-keeper, when Felix wants an explanation and insists the clock-keeper should give him one, which he can’t. The clock’s mechanisms are working fine but still an hour gets lost every day. This refers me again the premise of ‘Constellations’ where contradictory happenings can coexist across multiverses. The most magical moment was when Violet pulls a length of flax seemingly from the hidden edge of the long table that was centrepiece just before like everything else it was wrecked by the entropy of time. Suggesting reference to Macbeth, she wraps it around her husband’s neck as she prepares him for a dreamless sleep before he is found hanging from the clock tower, “sleep that knits up the ravelled sleave of care, the death of each day’s life”. Indeed this story resonates strongly with the violation of nature Shakespeare portrays in his Scottish play. Excellent allusion.

There was a hole or two in the plot though e.g. on Day 4, as the town clock jumps 7 hours from midnight, and we learn that the lost time is daylight hours. Then when light is extinguished finally and Violet has her boat ready to escape with Laura who is afraid of drowning, we understand there are no news reports from the wider world about what has happened yet Violet assures Laura that many boats have crossed the sea over the horizon without sinking.

This brings me to the disappointment I felt about the outcome. Seeing no more of Violet whom with Laura we assume has been liberated to find a new life at last, the bizarre denouement is relayed as an animated collage on the backdrop, including the announcement a baby was born in January. Is this to Violet, yet how and by whom? A series of numbers is flashed up which I took to refer to quiz teams as we watch a quiz show where a contestant has to give 10 answers about the side effects of sarin, else calamity will ensue as images of warfare increasingly dominate the screen. The final quiz question is shocking. Why would a man use a gun? Answer – to shoot his children in the face. This is a nihilistic message with no apparent redemption for anyone. Unlike Shostakovich’s tenth symphony, also desperate, terrifying and dark but which is ultimately triumphant in the face of impossible horrors, ‘Violet’ fails to leave us with optimism about surviving catastrophe.

The narrative tension is supported consistently throughout by Tom Coult’s score, uncomfortably atonal, performed by the singers who must be credited for the hours of work they must have done to mesh their voices with the dissonant orchestration of the London Sinfonietta conducted by Andrew Gourlay, woodwind and brass very much at the fore punctuating the vocal exposition of the story, though with chimes and the ticking of clocks providing atmosphere and variety with some electronics. Anna Dennis is especially impressive in the title role as she hits her notes with astonishing precision. But for those who dislike the artificiality of musical theatre where dialogue can seem forced and contrived, they may not be impressed by such torturous delivery. While giving credit to the singers for maintaining their difficult lines over 90 minutes of a story about the disappearance of time, it may seem ironic how slowly the pace of the drama passed. With little obvious harmonic contrast,‘Violet’ seemed dissonant from start to finish, with no let up of the strident tension as an orderly world disintegrates. Comparing dissonance to being pepper, Prokofiev said no one wants to listen to music that’s all pepper. While after 4 hours of dissonance, the groundbreaking score of Wagner’s Tristan and Isolde finally resolves with consonance, ‘Violet’ does not.

In summary then, ‘Violet’ as concept with narrative potential is intriguingly bold even if the denouement is finally disappointing, its staging was marvellous, and its performances commendable. Its shrewd avoidance of specificity as to time or place lends it the opportunity for long-term appearance in the canon of opera.