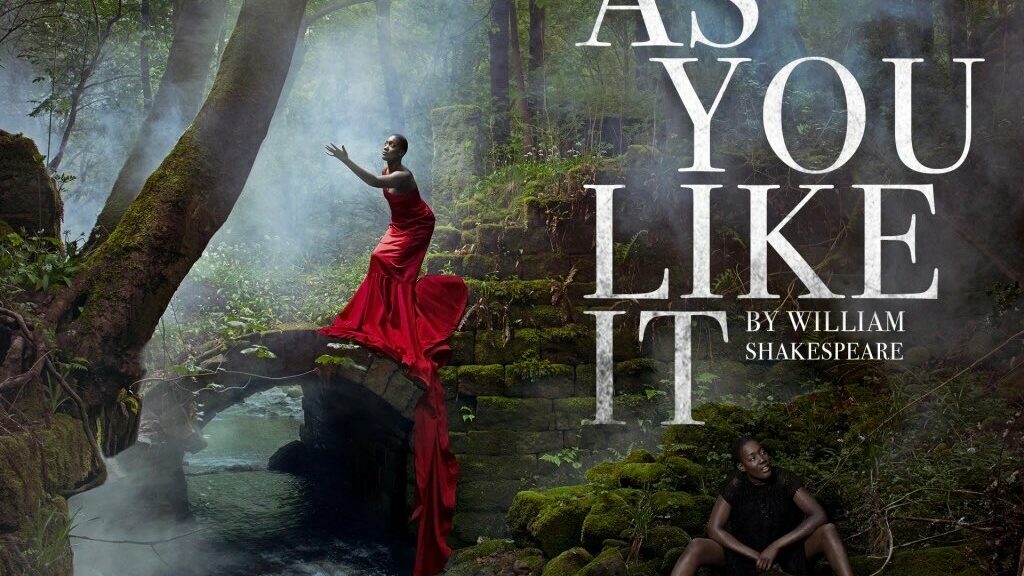 The performance was preceded by an announcement Northern Broadsides had needed to bring in two actors at extremely short notice because of Covid. This is a difficulty companies are going to face for some time to come. However, I didn’t feel it was just the pandemic which weakened this production. Its main problems were a lack of enthusiasm for Shakespearean verse and a belief the play’s comedy could be improved. If you are going to do As You Like It, though, I think you need to relish the poetry in the lines, the situations and the setting. You need to accept there will be long speeches telling stories, and that complex ideas will be introduced in imagery. You have to tread warily if you think you can improve on Shakespeare’s comedy, or think you have more to say about the human condition than he does.

So, the fact that the stand-in Duke had to read his lines was less intrusive than the TV show commentary introduced into the wrestling scene. As the wrestling itself was well staged and exciting, the commentary was unnecessary. Then there were distracting asides throughout the performance using modern English. They interrupted the flow of the action and the establishment of the its imaginary world. There was a conversation with the audience at the beginning of the second half (why?). There was additional cross-dressing, which weakened the humour emerging from Rosalind’s disguise, rather than complementing it. The ‘Shall I compare thee..’ sonnet was added in to the ridiculing of Orlando’s scribblings for a quick laugh. Despite the difficulties and the ingenuity involved in bringing four couples together for a simultaneous marriage at the end, they danced off with different partners.
Some of the cast managed the verse well, finding expressive intonations and getting into role easily, whilst others struggled, rushing what they had to say or grinding out their speeches. At times it was easy to follow and appreciate what was being said – Touchstone’s final speech was an excellent example of making the most of the lines, and he made the audience laugh with it – but all too often it was difficult to disentangle what was being meant. For example, far too much of what Jacques said was lost and this meant the character never established himself. Considering how vital and original Jacques is – he’s one of Shakespeare’s great wordsmiths – this was more than a pity. Overall, I thought the supporting cast led by Celia (Isobel Coward) sustained the play with funny cameo appearances and the business that surrounded them. They appeared comfortable in what they were doing and saying; in contrast the principals were unsteady.

For me, Rosalind (EM Williams) spoke too quickly and too emphatically. Every line was accompanied by an expression or a gesture. She was tense, almost angry throughout and whilst she was always interesting to watch she was also demanding to listen to. I felt like saying ‘relax’. She needed to stop trying to impress and simply win the audience’s sympathy because, although Rosalind does win through in the end, hers is no foregone conclusion: her success and the happy ending is not just the result of energy and aggression.

Orlando (Shaban Dar) was too slow and earnest although the character, with his confused attempts at expressing himself emotionally, can be highly amusing. There was little of the chemistry that can come out of a relationship between a duffer and a high achiever when he was with Rosalind. The comedy of the scene in which he, as a wholly unreconstructed heterosexual has to make love to the supposed boy, Ganymede, in order to practice for the real thing, was lost and with it Shakespeare’s clever exploration of gender and appearance.

Jacques(Adam Kashmiry) turned his back on the audience too many times and had a limited range of gesture, repeatedly stretching out his hands to make his point. I didn’t see what having him wear a skirt added to his character. He came across as troubled and sad rather than brilliant and artificially melancholy. The audience enjoyed the way the other courtiers fleshed out his ‘All the world’s a stage..’ but nothing was done with the very last act of all –

Touchstone (Joe Morrow) established a rapport with the audience by his exuberance and by speaking clearly and confidently but I thought the actor was miscast. He was not a fool with a wit –

as dry as the remainder biscuit/After a voyage

The backdrop to the play’s plot is the contrast between the confused, often corrupt world of the court and the honest simplicity and working life poverty of the country. Those that travel from the court into the country are all changed for the better, up to and including Duke Frederick who, like Putin, begins an invasion of Arden intending to commit mass murder and is then converted to benevolent pacifism, unlike Putin. On a technical and design level the production did not reinforce this basic distinction of setting – we didn’t get much of a forest – so observations like sweet are the uses of adversity fell flat.

In the last act, the middle son of old Sir Rowland de Boys arrives from out of nowhere to describe this fantastic conversion. His speech is somewhat tongue-in-cheek, with Shakespeare repeating and emphasising the magic of the return to nature, and it went unremarked although dramatically it completes the comedy. (Another production might have considered then and now attitudes towards the natural environment.)

Northern Broadsides is to be commended for keeping its show on the road and helping to revive theatres after the pandemic but, on the evidence of this performance, I think the company might be better advised to steer clear of Shakespeare, possibly tackling work by Brecht or other dramatists whose work is less reliant on verse where their inventiveness can be deployed without disturbing the basic fabric of the play.