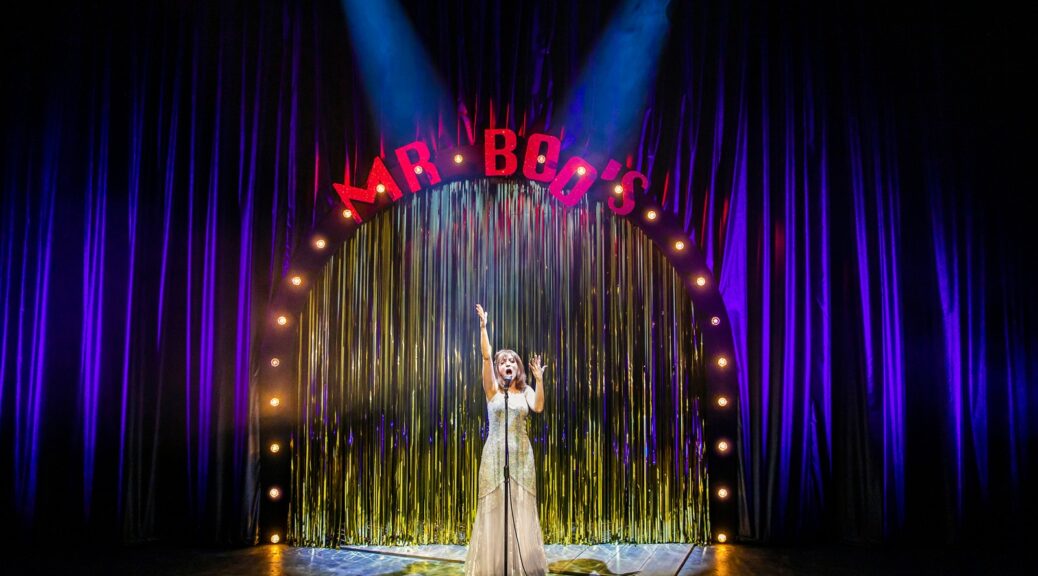 Jim Cartwright originally wrote The Rise and Fall of Little Voice with Jane Horrocks in mind for the starring role. Horrocks had just appeared in Cartwright’s acclaimed debut hit, Road and so Cartwright had witnessed her perfectly mimicking the likes of Edith Piaf, Judy Garland, and Shirley Bassey throughout their time together at rehearsals, at the theatre etc. The story of a painfully timid girl living with her brash and drunken mother and only able to express herself through her uncanny impersonations of her favourite singers, made Horrocks a star overnight. The production at the Cottesloe Theatre, London (now the Dorfman) was an instant success and did no harm at all to the reputation of little-known, young director, Sam Mendes! There have been several revivals since and of course, a film adaptation also starring Jane Horrocks in 1998.

This revival certainly does not disappoint; the only issue with this particular production being a technical one. As the play begins, we hear music from an old record player, Mari, and daughter Little Voice, conversing over it. At first, I assume the idea is that the music’s drowning out the sound of their voices, the title character’s quiet, mousy voice exaggerated. However, as the piece unfolds, I struggle to catch some of the dialogue and hear other audience members speak to staff about the same problem in the interval. Luckily, this does not take away too much from the rest of the production and I have a thoroughly enjoyable evening at theatre.

As the audience take their seats the curtain is open and we see a small, two-up/two-down house; clearly unkempt and unclean and somewhat dilapidated, perhaps to mirror their disorderly lives. Mari, a single parent who clearly enjoys a drink, a party, and a few men, is portrayed superbly by Shobna Gulati, who most will recognise as having played Anita in dinnerladies and Sunita in Coronation Street. For a start off, Gulati looks fantastic for her 55 years and stuns in iconic fashions from the nineties…leopard print, mini-skirts, sequins, and fishnet tights! This is such a well-written, complex character; fun-loving, sexy, brash, harsh, angry, emotional! Gulati’s comic timing is spot-on, and she gets across the gritty stuff beautifully as well. The character’s use of the English language also provides for lots of giggles with dialogue such as ‘you don’t know nothin’ about electrickery, do ya?’ and ‘you can imagine me feelin’s on signin’ marriage register… Mr. And Mrs. F. Hoff’! Cartwright’s script is certainly memorable and with its working-class backdrop, certainly has a feel of Willy Russell to it.

The set is highly effective, the house unmoving with only the curtain coming down and a simple, flashy archway representing Mr Boo’s club lounge where Little Voice will eventually perform, forced on by the sleazy, money-chasing Ray Say, played perfectly by Ian Kelsey. Also clever is the portrayal of the house fire in Act 2, brilliantly created by only the use of onstage smoke, sound effects and lighting. There is no questioning the event unfolding despite the absence of actual fire. LV spends most of her time in her little bedroom upstairs playing her records, surrounded by posters of Judy Garland etc. and a photograph of her late father, from whom she clearly gained her love of music. Mari spends most of her time downstairs, banging the ceiling with a mop handle to discourage LV’s playing and stringing along her ‘friend’ Sadie, brilliantly played by Fiona Mulvaney. A seemingly simple part whose dialogue mostly consists of the word ‘okay,’ Mulvaney provides numerous comedy moments; chugging mouldy Cornflakes from the box, dancing to the Jackson 5 and ‘vomiting’ whilst stood looking directly into the audience!

Finally, praise must go to Christina Bianco as Little Voice herself. Despite Bianco being in her forties and American, she plays the young, Northern lass to a tee from drooping around the house in her pajamas to her Pygmalion style transformation to a starlet in a gorgeous gown. And her impersonations are impeccable! Close your eyes and you are at a Judy show, a Cilla show, a Bassey show, sitting with the President whilst Marilyn sings him Happy Birthday! Bianco’s range, tone, and ability to mimic are outstanding!

The Rise and Fall of Little Voice continues its UK Tour on April 25th at the Theatre Royal, Brighton and finishes on July 16th at the Everyman Theatre, Cheltenham. Head to the website to book your tickets: