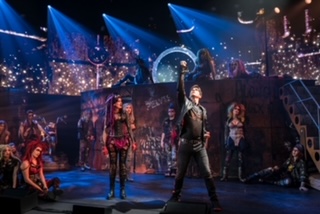 One of the key reasons that I love musical theatre is the fact that it transcends language barriers, cultures, age etc. While I thoroughly enjoy straight plays, they do rely heavily on the understanding from the audience whereas regardless of background everyone can enjoy a pretty tune, incredible vocals or even some insane choreography. Even if you don’t understand the words that are being sung, every one person can appreciate the performance elements to it which spans across languages for example. During the summer of 2016, I travelled to Hungary to help teach English to a group of learners attending a summer camp. At the end of the week, we hosted a talent show where anyone could showcase the weird and wonderful talents they possessed (and there absolutely was a range!) As the British team, we decided to do a lip-sync to the extremely unmistakable styles of Freddie Mercury and David Bowie by putting on a performance of under pressure. Going into our act I was concerned that the Hungarian kids would be bored and not enjoy their act but in fact, by the end of the number everyone was singing along in their own mother tongue which was incredible to witness! I was tasked with the colossal responsibility of taking on the role of the wonderfully eccentric Freddie Mercury who who is known for his over-the-top and striking personality. Physicalising these nuisances and personality quirks were very intimidating for me as everyone know how much of an enigma the Queen front man used to be and regardless of our placement within the talent show itself, I was proud that I managed to strut across the stage (in a semi-Freddie way) with everyone getting involved regardless of the language they spoke!

We Will Rock You is a musical that is based entirely on the musical of Queen and revolved around a group of characters who rebel against the people in charge and try to reignite a love for rock music. The year is 2300 and the entire world has been taken over by an international platform called global soft that almost brainwashes everyone into thinking and acting in exactly the same way. Firstly, the idea of a social media platform slowly taking over the world to control the minds of selected people is a lot closer than we as a race would like to hope. With the announcement of Meta by Mark Zuckerberg and the rise of popularity in certain social media sites, we are already being influenced by advertising and the censorship at times of free speech does suggest that if these media giants wanted to, they could easily create a false reality! Before we could even take our seats in the audience, we were greeted with signs telling people not to sing along to the performance as the performers should be the focal point. There have been hundreds of arguments online about whether or not people should be allowed to sing along with, and I totally appreciate the fact that especially for jukebox musicals we are aware of the songs before the musical is even created! However, I thought it was nice for the show to make a definitive stand and outright discourage audience participation. This was pitched as “do not sing along unless invited by the cast” which was clear but there was really no point where the cast explicitly ask the audience to sing along. As this is a musical of Queen’s greatest hits and the audience were discouraged from singing, I thought that it could have been done with a mega mix at the end of the show where the audience can sing and dance their little hearts out! There was an incredible encore performance of Bohemian Rhapsody at the end of the show, but it was never explained if the audience should should not join in with this iconic number. I think that as many audience members were able to stay quiet throughout the entire show (which even I struggled with at certain points) there should have been an opportunity at the end of the show tie the audience to sing and dances as well! Despite being a show set almost one hundred years into the future, the show is riddled with many popular culture references including clever weaving song lyrics/titles into dialogue, references to social media and mentioning of COVID (including one hilarious joke about needing protection with our two lovers simply putting on face masks before going to bed!)

As the story progresses the audience discovers that it is not just over two lead characters Galileo and Scaramouche (played by the wonderful pairing of Ian McIntosh and Elena Skye respectively) who feel as if global soft is brainwashing people and so join a rebel alliance to help and re-discover the power of rock music that is banned across the land! As discussed earlier my extremely short performance as queen singer Freddie Mercury filled me up with a lot of fear due to how eccentric he was, and this has in turn developed and a deeper sense of sympathy from me to anyone who even attempts to re-create the magic Freddie possessed! It seems that Ian Mcintosh was extremely comfortable performing some of Queen’s most iconic numbers throughout the show. While he was not taking in the role of Freddie per-say but as our lead character, he was responsible for heading up the performances of many of Queen’s most popular songs. I thought that as the show progresses, Ian becomes increasingly comfortable and confident in this role with his physically be the end of the show being the most Freddie-esque which complimented to narrative perfectly! Alongside Galileo for the majority of the show was Scaramouche played by Elena Skye who managed to perfectly portray the journey from outcasted student to official rock star fanatically with her performance of “Somebody to love” being absolutely incredible. It is very rare to see members of the audience giving standing up ovations halfway through an act, but many people were up on their feet after this incredible performance!

My personal highlight through the whole show however would have to be Jenny O’Leary who played the wicked Killer Queen and delivered some of the best vocal runs I have seen in an awfully long time! Her performance of the show must go on was quite possibly one of the most vocally powerful performances with her insane riffs being highlighted throughout. It is clear that Jenny is not only a ridiculously talented vocalist but also contains a stage presence that cannot be matched! She was able to command the audience’s attention and own every single piece of the staging ever when being in the foreground, I still found myself focusing on this gifted performer. During the first act, this character can be seen performing extremely powerful hand gestures and rather unique accent which to me seed very reminiscent of the iconic Devine/ my favourite Disney villain Ursula. The latter of these two inspirations was clearly embedded by the fact that Killer queen spent the majority of act one in a mermaid sequin outfit that not only looked incredible in Jenny but also paid homage to the iconic Villain form the little mermaid! Apart from being hit after hit from debatably the world’s greatest rock band, there were also a few moments of raw emotion in this production. There was an insanely moving performance towards the end of act one of “No One But You” which by itself is very moving but added on top of this it was performance by the character referred to simply as meatloaf and as we are all away meatloaf recently lost his life after a battle with COVID. This performance was respectfully done and had many audience members (myself include) awfully close to tears! While talking about recognition, I thought it was great that the band of this production were actually given an opportunity for a stage bow which is even more important knowing that the show has heavily reliant on rock music. The band were included in scenes at certain points and accompanied performers throughout and so I thought it was a nice touch that they received some praise at the end of the show!

Overall, this is a show crammed full of some of the Queen’s most iconic songs and so if you are a fan of the band or were around during their meteoric rise to fame then you will love hearing some of your favourites being performed live! I did find that the songs were the focal point of the show with the narrative almost being a second thought which is great if you are coming with the intention of celebrating queen and their music! Every member of the cast was incredibly talented and performed excellently at all times and so I would rate this show 4 out of 5 stars!