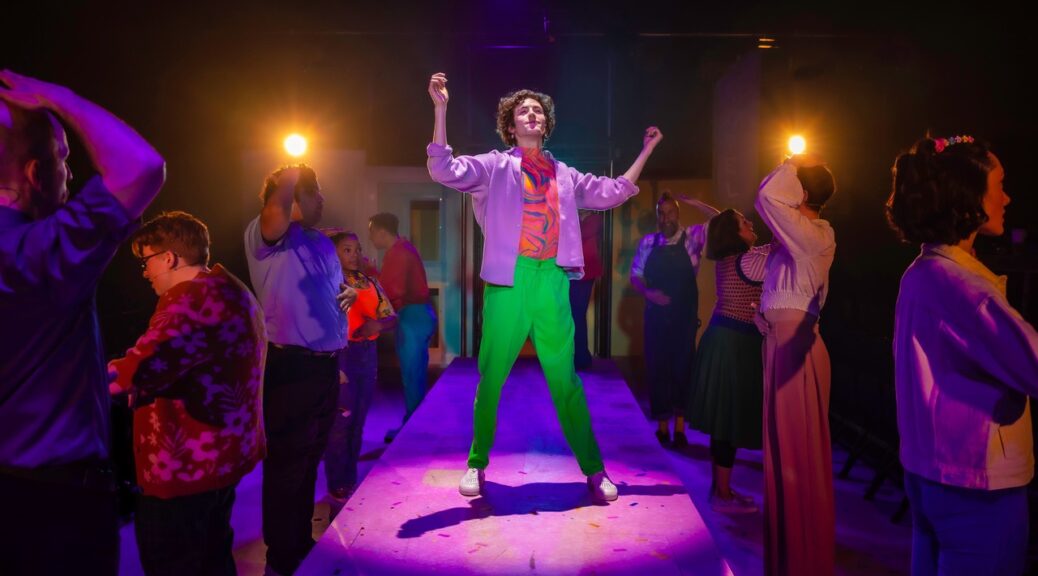 Please note this is a review of a preview performance

Floods of tributes for Steven Sondheim have poured in since his death in November. Send in the Clowns often gets in my head, I doubt I could think of a song more perfect. A legacy has been left with highs and lows, featuring lesser known stage work going back decades. Anyone Can Whistle is one such example.

The Grey Area Theatre and Alex Conder have taken a risk with this musical, certainly not one of his shows which comes to mind, more of a Pointless answer on that TV quiz (I remember getting Merrily We Roll Along as a winning answer). It reeks of mid 60’s, on the cusp of free love and the big revolutions of the day. The book by Arthur Laurents is not as sharp nor comical as it should be. Sondheim here has the promise of great songs, with that machine-gun quick lyricism that comes later, more defined more acclaimed pieces. The story tries to put under a microscope miracles, society, identity and the medical professions, yet doesn’t achieve any deep insight or whimsy. Strangely, there was a feel of Mark Twain and Dr Seuss for different reasons.

Past this, here is a peppy, diverse ensemble who put a lot of effort in a confined cat-walk with a band up on a rampart. The theatre has little of a set, a rock for the miracle MacGuffin to occur, some motels signs and a wheelbarrow full of glitter being passed of as the holy water. The leads have charisma. Jordan Broatch is J. Bowden Hapgood, Donovan meets The Darkness in a role full of subtle swagger and a happy-go lucky, deception. Alex Young gets most of the laughs as Cora Hoover Hooper, the silly-billy mayoress in a state of constant corruption, her only paranoia to be struck out of office, an act on a knife edge of occurring throughout. Christina Symone as Nurse Fay Apple, is the up tight sort, losing herself in her daft French disguise, proving some decent vocals. The full cast had enough energy to conduct electricity, the buzz of the space hard to deny. Costumes hark back to the psychedelic, hipster days, with an 80s nod in the second act as well.

I saw the last preview performance and noted the screens with music director Natalie Pound in the last two acts lost a signal, with some desperate attempts by a stagehand to fix this. The band were alive with the upbeat plateau that the musical little left. I feel the show might have suited a slighter large venue, I noted a few near slips off the platform, though nothing dramatic. Perhaps then you would be able to drink in the notorious sanatorium dance numbers, a larger rock set might have added to the drama as well.