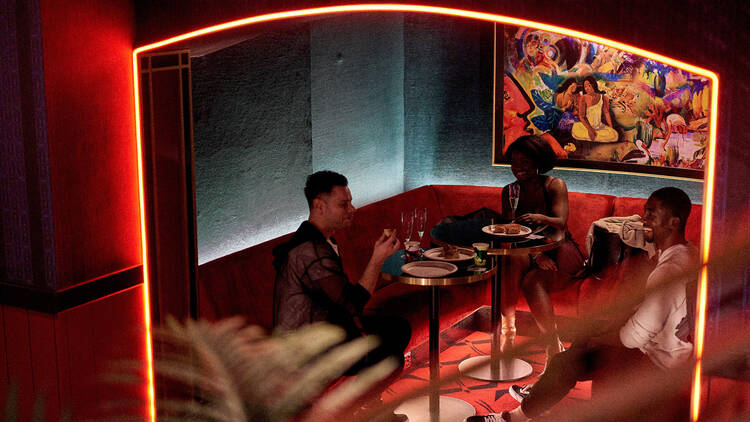 A recent Time Out article caught my eye concerning a brand spankingly new cinema that has opened in the heart of London. To my delight, the discovery of The Garden Cinema holds up as a triumph for my most recent London visitation. If you like all things Art Deco then you have to look no further. The reds and golds are all here, the angular designs and the glamour of Hollywood’s yesteryear are all present. Sitting in Cinema 1 for two features, these held up as the most polished, comfortable seats I’ve sat on, quite similar to the ones in Cardiff’s Cinema 2 at Chapter Arts Centre…you won’t want to leave them.

I was greeted with great friendliness by staff, I found myself having gin (a rarity for me) and cups of dried pineapple and cashews. It’s amazing to see a cinema that will allow you to take glasses into the cinema and also maintain a no noise policy by having snack in quiet tubs. I did hear the odd rustle in the back row and some chatting in the first film, but thankfully that died down. Having a naughty look in Cinema 2, it was an even more intimate space, very welcoming and warming. It’s the touches here and there that sell this arthouse cinema. The posters, prints and the like all add a elegance not seen in today’s cinema. There is also an ethos on no trailers, instead short films to prelude the feature presentations. There is talk of having local film maker night as well. I will take to court any Londoner who will not support this pristine new enterprise and make it a regular for film and drinks.

With Oscar nominations to boot, this fresh film sees a young protagonist Julie go around Oslo, lost in one relationship thinking of having another. Renate Reinsve compels the role of a woman who doesn’t really know what she wants, very relatable in today’s age of Me Too, social media and the general angst of living. The film pops with some flowery cinematography. Two scenes stand out: when Julie offers the blow back of her cigarette to new lover Elvind (a solid Herbert Nordrum) and when time stands still for Julie to sneak off to meet him. Poor Askel played by Anders Danielsen Lie goes through a lot in the film, an artist who creates the Norwegian equivalent of Fritz the Cat.

A scene in a radio interview speaks volumes about today’s cancel culture, both sides with fair points here. A fine performance form this sweet actor, sadly the third act leads to little in a Cancer diagnosis for the character and no where for the story to go other than having Julie spoil once again the new relationship she was in (perhaps that’s an assumption? ). There are predictable elements as well, a scene involving a shot of her legs in the shower could only lead to a miscarriage. The father sub plot could have also been tackled a bit more considering the run time. See for the camera work and decent, amusing acting.

I also caught the tail end of the short Single concerning romantic with people with physical disabilities. This appeared highly skilled, with a nice touch of romance. Will try and find a link to watch fully.

Death, regret and family resentments permeate Cries and Whispers. This is top quality Bergman, well regarded as Sweden’s finest master. His Persona is a personal favourite, yet this is up there for me. A quiet opening, the stillness with ticking clocks will soon fade away as two sisters come to term with their other dying sister. A chilling film by any standard, the psychology of the women remains fascinating, the maid Anna also a ground breaking exploration as care giver and loyal friend. Biblical sights also frequent the period setting, some very obvious. “A tissue of lies” said in the film seem to capture the aspect of the story well and whether Agnes did actually die at the end. Martha and Karen has hate for each other for no real reason and as the film goes on they appear to reconcile if only for a while. Each woman get’s their back stories fairly portrayed, helping us understand their plight much more. Most scenes fade to crimson red, a motif in the scene with plenty of blood seen later in a disbursing moment involving a broken shard from a wine glass. Of course, we have the famous expressionist close up, pure chiaroscuro every time.

This is devastating cinema.