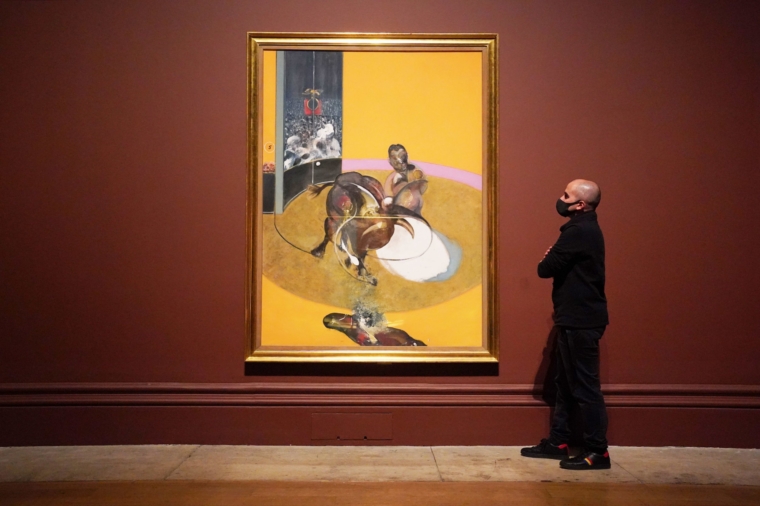 The biggest London exhibition of the work for years of Francis Bacon presently stagnates at The Royal Academy. I have fond memories of the previous exhibit at the Tate Britain in 2008, a lasting legacy for me as a lover of his craft. I can’t tell you how many times I doodled his Base of a Crucifixion figures in uni, a version of this on display, though not the pure horror of the original. The only work of his I’ve seen since is the lesser known painting in Cardiff at the National Museum, not one of his best (though I believe) is still on display.

Even with my energies waining I found this show at the Academy quite absorbing with all the morbid curiosity, crowds rushing to see the weird stuff first indeed. This is certainly for the strong of stomach as the amount of viscera splashed around is unbounded. We see some electric bull fighting paintings, (I saw an actual living spider in one of the canvasses and notified security!) with swept paint and a mustard yellow backdrop, the scorching Spanish climate defining death in the afternoon that is the so called sport. We know he loved boxing as well, violence is never far away. This gory spectacle both horrifies and delights.

Fine work is seen in his portraits of friends, lovers and his contemporaries. The way he holds the faces is but a still shot of a highly rendered, bruised stop-motion. The pit of despair which never leaves any of this work…consider the drunk and drug fuelled nights he created this paintings without any idea of what they might be in his baffling, hoarder like studio. His influences are clear and also quite random. The early photography of Meyerbeer, the classic Russian film Battleship Potemkin and even the animal world strongly feature and maintain masterstrokes in every flick and scrub.

Monkeys and chimps appear a few times, a reminder of our primal heritage and of our base desires. Sex is never far away from Bacon’s mind, a homosexual during the time it was illegal must have had a deep effect on him. His lover George Dyer haunts many frames, their tragic love story best presented in the film Love is the Devil: A Portrait of Francis Bacon. Derek Jacobi was simply made to play Bacon…

Nobody nor face comes out of his gaze undamaged, as if surreal boxing match in a dark theatre box outline. The deformed and the decayed loiter. His use of colours not usually seen in art: purple, orange and black also defines his brilliance. One sensational triptych even features huge pink paintings with three squalid female figures. His blows dust in other pieces, or newspaper print in another. Perhaps other unmentionables as well, maybe? His work is now in museums around the world and private collections. Here was a small buffet of his twisted vision with some good highlights and lesser seen work to boot.

A must see in London.

Francis Bacon Man and Beast runs at the Royal Academy London till 17 April 2022.