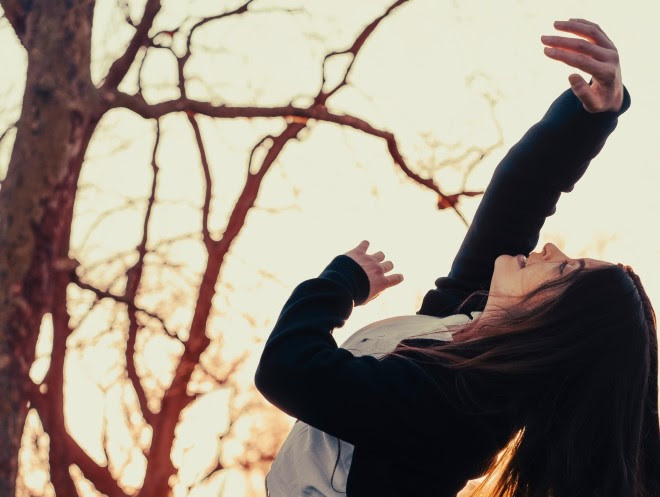 Co-directed by Joe Murphy and Matthew Holmquist, Dance to the Bone is a gig theatre show performed at the Sherman Theatre in Cardiff inspired by the dancing plagues of medieval times which explores what it would be like if a plague of this kind were to break out today and how society might react.

The evening started with a folky rock belter with leading vocals by Oliver Hoare who co-wrote the drama with Eleanor Yates, singing “I wanna take you dancing”. I could sense the audience twitching in their seats, itching to throw a limb or two and start a dancing plague of their own. I found myself in awe of the multi talentedness of the cast and particularly loved the music which was a catchy and refreshing mix of folk rock.

The story line is fast paced and the dialogue sharp witted with themes of grief and trauma running throughout. Joanne Bevan (Yasemin Ozdemir), our protagonist works at an insurance company with her brother, John (Jack Beale) both of which have recently lost their grandmother, with Joanne seemingly especially affected by this loss. Choreographed by Krystal Lowe, Ozdemir’s energetic dance solo was a mix of thrashing, kicking and more traditional dance moves which included some very impressive backbends. When the other characters eventually caught the dancing fever, I was particularly impressed by Beale’s agility as he writhed and flailed around with excitement during his impassioned speech about the expectations around his role as a big brother and “man of the house”.

The show ends with the ensemble finally dancing altogether under the warm glowing light bulbs hanging from above; each embracing different ways of moving, some floated ethereally and some kicked, punched and swiped the air purposefully.

All in all, an impressive display of talent and a well rounded, thoroughly enjoyable show.