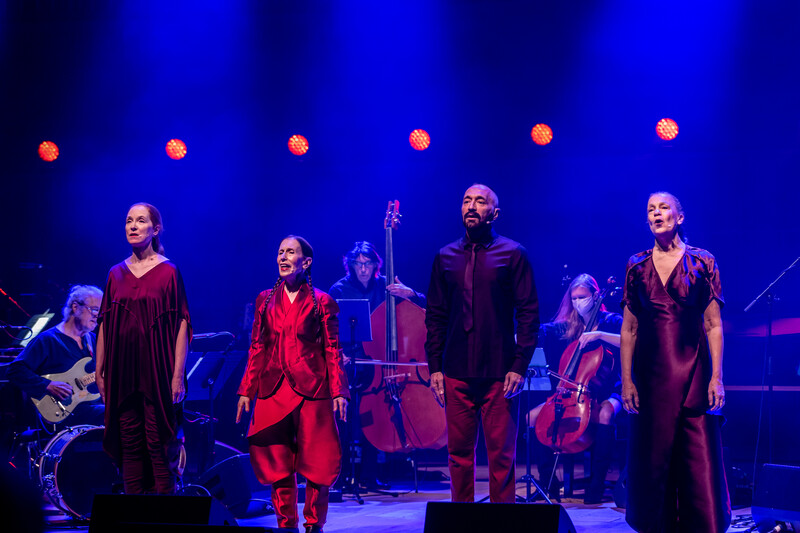 St-Martin-in-the-Field Church in London maintains a calendar of concerts all year. The raw energy of percussionist James Larter should shock an idle Friday afternoon audience in an hour of sizzling, sonic sounds. One might run afar from the music of composer and mathematician Xenakis, yet his Psappha was a powerhouse of force, James greatly showing off the demands of the work with ease and determination. Richard Rodney Bennett and his Marimba Concerto (the first movement) followed featuring on piano Tyler Hay, representing the allusive orchestra in this reduction. Perhaps the most stringent of the programme, Bennett’s time with Pierre Boulez shows here, with some moods of brief Messiaen, the composer being well known for more traditional film scores. James here flexed his percussive muscles with the marimba his gym rack, with Hay a smooth and well equipped companion.

Composer Param Vir introduced his premier work: Drum of Deathless, in a solo arengment. Taken from time spent in a freezing monetary in South Korea, Via has flung into the air a work of great magnitude, quite showy as James chants and clamours away beautifully. Both small percussion and the marimba are on offer, with a dexterity needed in the transfer of sounds. Temple bowls added flavour to an already spicy broth in what could proof to be a percussion favourite in years to come. James’ own piece Bedawi, utilised electronic beats, call to prayers and a middle-eastern inspired musicality. This wrapped things up well, evocative in nature, though slightly too shorty feeling more like an encore. James is one to watch.

Leading to an evening at the Royal Festival Hall with a music legend, an woman of charm and filled with vim. There was much anticipation for Meredith Monk’s first concert back in the UK for some years. During lockdown I began to engage much more with her canon: Zoom workshops, a kick starter (which I gladly pledged to) and my interview with her all added to my quest to know more, to get a more rounded sense of this interdisciplinary artist.

Entitled Memory Game, the night would feature hand picked work from Meredith’s extensive output. Starting with The Games, a galactic examination of fascism in the guise of a science fiction opera. What lovely things to hear, as always with this music. Meredith’s singers: Theo Bleckmann, Katie Geissinger and Allison Sniffing are individually brilliant in their vast scope of roles. The joy of the absurd thrives here and the thrills that feature leaves faces beaming. The dance work is also unexpected, grounded in simplistic modes of expression, yet always achieves its goal. The utter delight that was Tokyo Cha Cha from Turtle Dreams Cabaret held up as funny and endlessly charming. Migrations from The Games, saw Ukrainian tributes with blue and yellow lighting, as this touching moment stirred hearts, with Meredith near wailing, child like in voice. Double Fiesta ended with that rush hour speed, the ear worm of the night. A few encores also appears this hungry audience, the show being under 90 minutes.

I’d have loved to have heard Hocket and The Boat Song from Facing North, since Theo Bleckmann was present who premiered the work with Meredith. Though Theo’s ludicrous Gamemaster’s Song, another selection from The Games, had a bouncy keyboard riff and oodles of poses and vocal frontiers for him. The Memory Song also from the opera a sweetly scented venture into the characters thoughts as they venture out into space, with a shopping list of things now gone to them. Spaceship which opened the night gave the musicians time to wrap up and enter this universe of thoughtful ideas, harmony never comprised, melodies never to approachable. The years of collaboration with Bang on a Can Allstars also shows. The instrumentalists shined with funk, patience and the passion for every bar of music. It’s the sincerity that surprises you the most in Meredith’s art. A lack of sung words also open up much more interpretation, with a general minimalistic vein exposed. Few would argue she remains an unique voice. Few other artists have chirped, shrieked, scoffed and teased their voice like Meredith has and we love her all the more for it.

The evening ended on a high note with a relaxed post show talk with Meredith and musicians from the night. I finally had the chance to meet her in person and she always speaks so kindly of Wales, hoping to return one day. Photos and autographs were greatly appreciated, as I left filled with love and warmth.

Join Zoom song and dance workshops with Meredith Monk and her singers, see her website for details.

Meredith Monk will continue with Memory Game with her Singers and Ban on a Can All-Stars, with film screenings and Cellular Songs on tour at the Rewire Festival in The Hague, with the Cellular Songs in Nantes, Paris and Luxembourg.