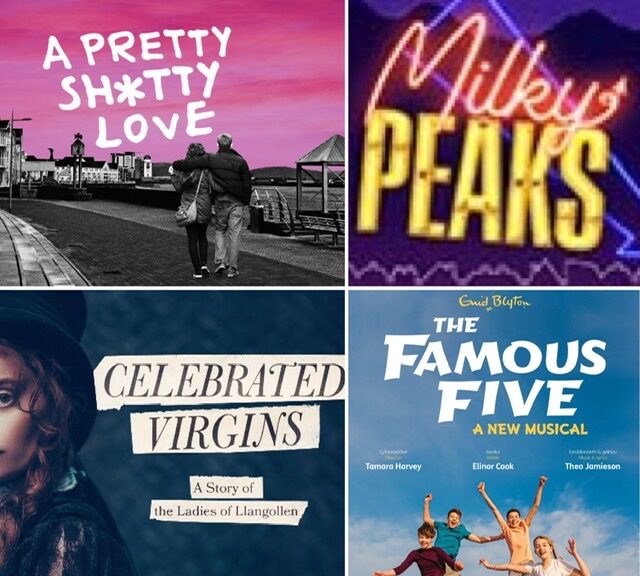 Theatr Clwyd today announce a massive summer season of activity. The season boasts an incredible mixture of musicals, comedy, drama, music, and family activities. The venue welcomes the return of many community performers that have not been able to take to the stage since before the pandemic.

Theatr Clwyd produces brand new productions in this season. Celebrated Virgins, A Story of the Ladies of Llangollen (20 May-4 June) is a brand-new production written by Katie Elin-Salt and directed by Eleri B Jones. Based on the true story of Eleanor Butler and Sarah Ponsonby. When they fell in love, they were forced to leave their homes and cast out by society. Taking up residence in Llangollen they became minor celebrities, forced to witness their own lives written about by those who could never understand. Now, they are back, ready to take back the story that’s rightfully theirs – on their own terms.

A Pretty Sh*tty Love (8-23 July) is a drama that is based on the true story of a couple and their journey. Hayley wanted to fall in love – to find her prince. She never found it though, she never looked in the right place. Then along came Carl. This is a new play by acclaimed playwright Katherine Chandler and directed by Francesca Goodridge. This show contains challenging themes.

There are also two brand new musicals being co-produced with Theatr Clwyd this season. First up is Milky Peaks (1-12 April) Milky Peaks: the warmest welcome in the cold bosom of Snowdonia. However, under the gleaming pebble-dash, strange forces are rising: both political and supernatural. Can three lost souls and a shabby drag queen save the community’s heart? Milky Peaks reunites writer Seiriol Davies with collaborators Matthew Blake, Alex Swift, Dylan Townley and Áine Flanagan, the producers who co-created the critically acclaimed How to Win Against History. Advisory age 14+

Secondly in the Autumn Season The Famous Five: A Brand New Musical (23 Sept-15 Oct). Based on Enid Blyton’s multi-million-selling novels, this brand-new musical written by Elinor Cook, with music and lyrics by Theo Jamieson, is an exciting and heart-warming family treat celebrating adventure, bravery and friendship for everyone aged 7+. The show will be directed by Theatr Clwyd Artistic Director Tamara Harvey, and will be co-produced with Chichester Festival Theatre. When George and her dog Timmy find out that her cousins Julian, Anne and Dick are coming to stay, they’re pretty sure the whole summer is ruined. But out in the bay lies Kirrin Island and a ruined castle filled with mysteries to solve. Together they embark on a daring mission with the future of the planet at stake – a mission that might just be the making of the Famous Five…

The pantomime on offer this Autumn will be Robin Hood, The Rock ‘n’ Roll Panto! (19 Nov-14 Jan) The show will have all sing-along songs, fabulous frocks and dazzling sets that you’re used to. The venue can now announce that beloved panto dame Phylip Harries will return for all the usual panto fun.

Back to summer activities, and the Flintshire venue will welcome many touring productions. The Rise and Fall of Little Voice (18-23 Apr) stars Shobna Gulati (Coronation Street), Ian Kelsey (Emmerdale) and introducing the two-time Drama Desk Award Nominee Christina Bianco. This Northern fairy-tale explores small-town dreams and finding your voice. The show includes power ballads by Judy Garland and Shirley Bassey. Boeing Boeing (24-28 May) is an award winning comical-farce brought to you by London Classic Theatre. The Play That Goes Wrong (26-30 Apr) once again returns following its 2018 sell-out run in Mold. For musical lovers, Willy Russell’s tragic tale Blood Brothers (2-7 May) follows the story of twins separated at birth.

The venue once again welcomes National Dance Company Wales with their trio of dance performances One Another (10-11 May) and Ballet Cymru present their Mold debut, Dream (29 May) a vibrant, fresh, and joyous new ballet based on Shakespeare’s A Midsummer Night’s Dream.

There is plenty of comedy this season with monthly comedy clubs as well as Mark Watson’s show This Can’t Be It (12 June) after its postponement in January. Kiri Pritchard-McLean brings her tour Home Truths (30 Oct) as she returns home to Anglesey talking about all things from rescue chickens to learning Welsh.

This summer sees the return of Family Arts Festival (29-31 July) the weekend will be jam packed with boredom busting events, activities, workshops and shows all at low cost. Keep your eyes peeled on social media for more details. If you can’t wait for that, come along to Julia Donaldson’s much loved children’s story The Gruffalo (13-15 May) full of songs, laughter and monstrous fun, also join Twirlywoos Live! (20-21 May) for an adventure in their big red boat.

With music from Dionne Bennett and the Royal Welsh College in their performance Blue Summer (22 June) and Rush Theatre presenting The King of Reggae (1 May) there is something for everyone and there will more classical music concerts to be announced on the 8 May.