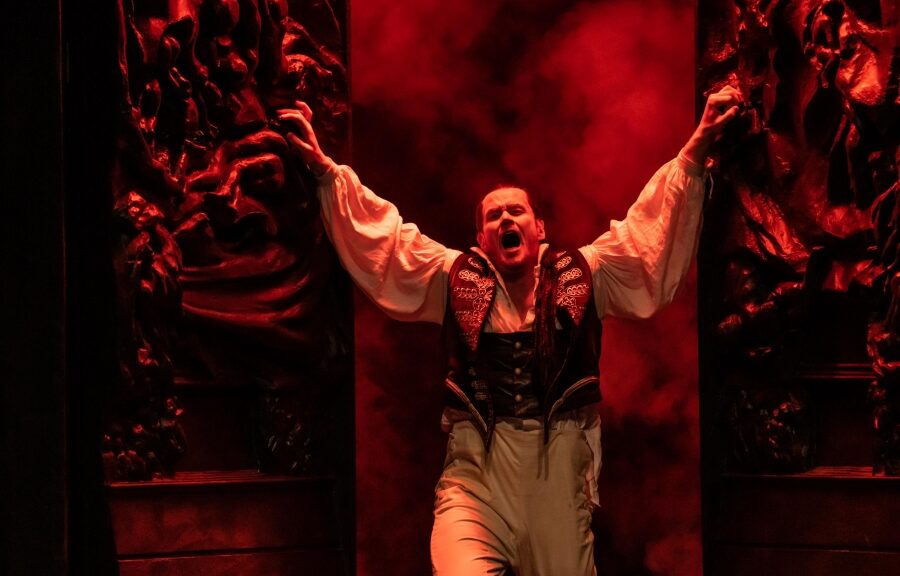 The WNO offers an accomplished production of Mozart’s Don Giovanni that never quite takes off. Don Giovanni is a womanizer who seduces and even rapes women. He is condemned by the community and unrepentant is brought down to hell. Mozart’s dramma giocoso alternates playful elements with tragedy. The able cast seeks to balance the two but the perhaps confusing direction leads them astray taking the tension away. This is exacerbated by the heavy and lugubrious art design throughout the show that leaves no room for playfulness.

Joshua Bloom performs well as Leporello, Don Giovanni’s servant. However, he expresses a little too much reprobation in singing ‘In Spagna son gia’ 1003’ leaving out the ridiculing of Don Giovanni. In contrast, Meeta Raval plays Donna Elvira, one of the victims of Don Giovanni, with a little too much humour. Donna Elvira feels love and hatred for Don Giovanni. Although Raval sings beautifully and with conviction, the confusing stage directions bring about a too abrupt turn to tragedy leaving out the inherent tension within Donna Elvira. At the end, when she declares she will confine herself to a convent, the audience laughed. Donna Elvira’s suffering is being denied.

Linda Richardson, as Donna Anna, steals the show with a powerful and dramatic voice. There is no ambivalence in Donna Anna who is the victim of an attempted rape by Don Giovanni and whose father, the Commendatore (James Platt), is killed by Don Giovanni as he runs away. Duncan Rock, as Don Giovanni, gives a solid performance, but not a powerful one. Harriet Eyley shines as Zerlina, who is almost seduced by Don Giovanni on her wedding day. Her husband Masetto is played with vigour by James Atkinson, who offers an impressive performance. Don Ottavio, fiance of Donna Anna, is played by Kenneth Tarver whose agile voice is impressive though perhaps lacking in robustness.

On the whole, the performance lacks energy and subtlety. The usually excellent WNO’s orchestra fails to do justice to Mozart’s polyphonic music and keeping the pace slow. This production fails to bring out that alternation between playful and dramatic. Don Giovanni finds his death inviting to dinner the statue of the Commendatore, Donna Anna’s father whom he killed at the beginning. It is rather confusing to see the statue on stage from the very beginning, even before the Commendatore is killed.

The WNO assembles a good cast and can usually rely on a strong orchestra and excellent choir. Their performances are too often let down by the art production and direction, often based on a previous production. In this case, the original direction was by John Caird. This makes originality and innovation impossible.