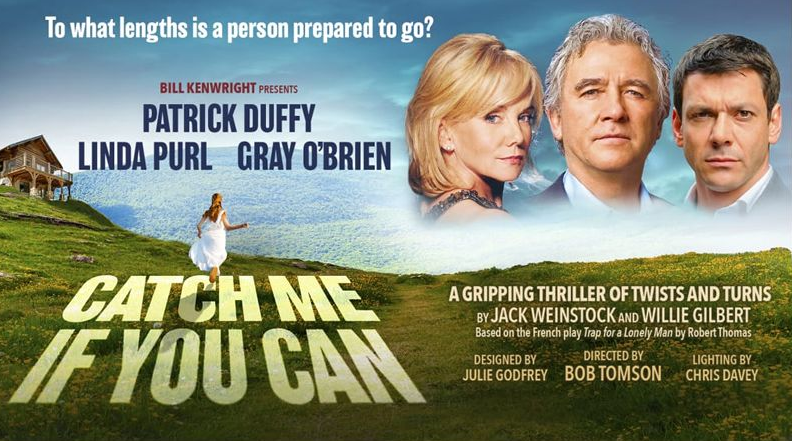 Starring the Man from Atlantis himself, the legendary Patrick Duffy, Catch Me If You Can is an intriguing thriller that will keep you guessing right up until the final moments.

While it might sound like a stage version of the Tom Hanks/Leonardo DiCaprio crime caper, the play is in fact an adaptation of Robert Thomas’ French thriller, Trap for a Lonely Man. This entertaining new production is produced by Bill Kenwright and adapted by Jack Weinstock and Willie Gilbert. The story follows Daniel Corban (Duffy), an ad exec who’s honeymooning in the Catskills when his newly-wedded wife goes missing. Fraught with worry, Corban enlists the help of his detective pal, Inspector Levine (Gray O’Brien), but his prayers are instead answered by the local priest (Ben Nealon), who brings the erstwhile Elizabeth (Linda Purl) home – only for Corban to denounce her as an impostor.

A triptych of performances make this a worthwhile trip to the theatre. Duffy won hearts as Bobby Ewing, Dallas’ favourite son, and here demonstrates impressive range as the frantic Corban, all shabby elegance and harried grace. He shares his most riveting moments with scene (and life) partner Purl (Happy Days, Homeland), who draws both sympathy and suspicion as the enigmatic Elizabeth. And O’ Brien, known to most as Corrie’s treacherous Tony Gordon, plays the wearied, washed-up detective with sardonic aplomb. There are excellent supporting turns by an on-form Nealon (Soldier Soldier) as well as Hugh Futcher, Paul Lavers, and Chloe Zeitounian.

Directed by Bob Tomson (Blood Brothers, Evita), the story is clever and engrossing and the cast’s lively performances make for a very involving whodunnit. The intriguing stakes are heightened by the ‘60s setting – modern enough to feel relatable, distant enough to ensure that the mystery can’t be solved through more convenient means like CCTV, smartphones and DNA evidence (still a nascent form of technology at this stage). Julie Godfrey’s palatial ski-lodge set traps the actors in a decadent cage, and the rising tension is punctuated by Matthew Bugg’s sound design and Chris Davey’s lighting.

While the pacing could be tighter in parts and the mix of comedy, drama and mystery takes a minute to commingle, it has all the ingredients that made Columbo and Murder She Wrote such a treat. There’s a reason they’re called ‘cosy mysteries’. While Bobby Ewing always tried to do the right thing, can the same can be said of Daniel Corban? Well, that’s for you to find out. With contemporaries like Mad Men’s Don Draper, it’s anybody’s guess. Fun, smart and engrossing, Catch Me If You Can is a ripping yarn with the kind of twists and turns you’ll want to unravel for yourself.

Catch Me If You Can is playing at the New Theatre Cardiff through to Saturday 5th March 2022.