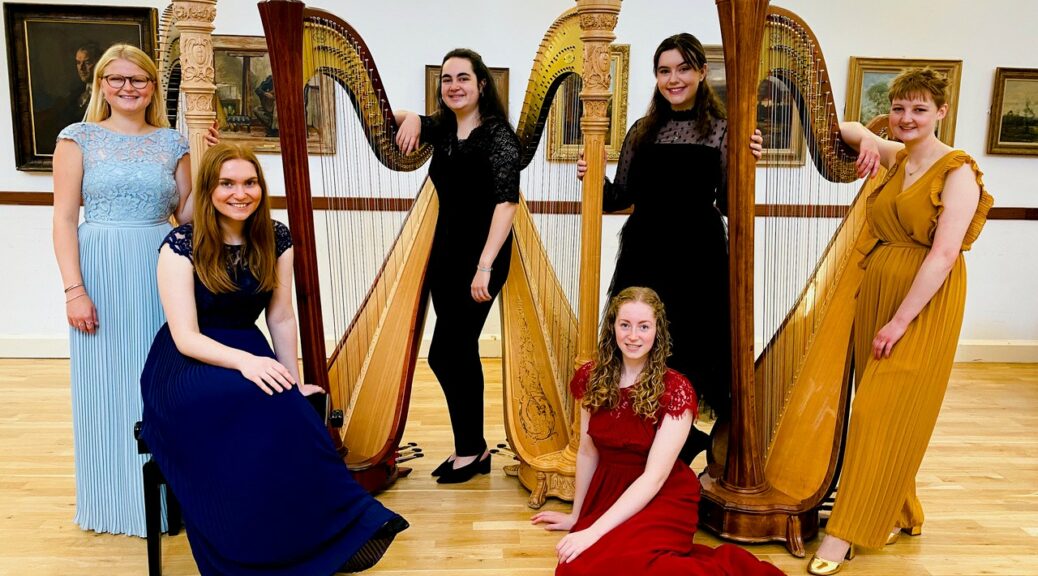 This St David’s Day is filled with worries. We’re in the post-pandemic timeline, with the worry of war also everywhere. My own thoughts on nationhood are usually compromised today and sometimes not feeling Welsh enough does enter my mind.

If only for an hour, the Harp Ensemble from the Royal Welsh College made everything okay, with a fine programme native to Wales and artists inspired by our country. Monika Stadler evokes the Preseli Skies in a light opener, the ladies of the ensemble warming up for this concert. It’s the interplay between each harp that was highly stimulating. You didn’t know where to look at times. Melodies abound in this fine little piece.

David Watkins’ Petite Suite was another sure fire delight, the Nocturne in the centre particularly noteworthy, the Fire Dance finale had some pleasant dynamics as well. In a more austere choice, one of Wales’ biggest 20th century composers: William Mathias and his Zodiac Trio made more of a chin stroking choice. Each movement is the Zodiac sign of the musicians who premiered the work (Pisces, Aries and Taurus) and Mathias isn’t afraid to try more experimental modes, even if it still feels quite conservative in nature. Flickers of Messiaen and serialism hit the ear, though the combination of harp, flute and viola might not sound as enjoyable as you would think. Through this, I still want to hear more of Mathias, who seemed to have a big impact on Welsh music.

Our host for the concert, tenor Rhydian Jenkins delivered three sublime Welsh songs. The delights of Mae Hiraeth yn y Môr and Llanrwst really made this special, Jenkins having a bright, easy voice with a little strain in the high bits (he mentioned how hard the latter song opens with some very high notes). Dafydd y Garreg Wen in an arrangement by Meinir Heulyn saw Jenkins sing with the return of all six harpists in another superb song which proves why we are known as the land of song. Wrapping things up with the Jig-a-Jig from Catrin Finch’s Celtic Concerto in an arenment by Jeff Howard. Having heard this before, Finch’s mastery over the harp is evoked in this pristine and sunny work, with it’s opening a tune worthy delight, never waining and always uplifting. Perhaps things wont be so bad after all?