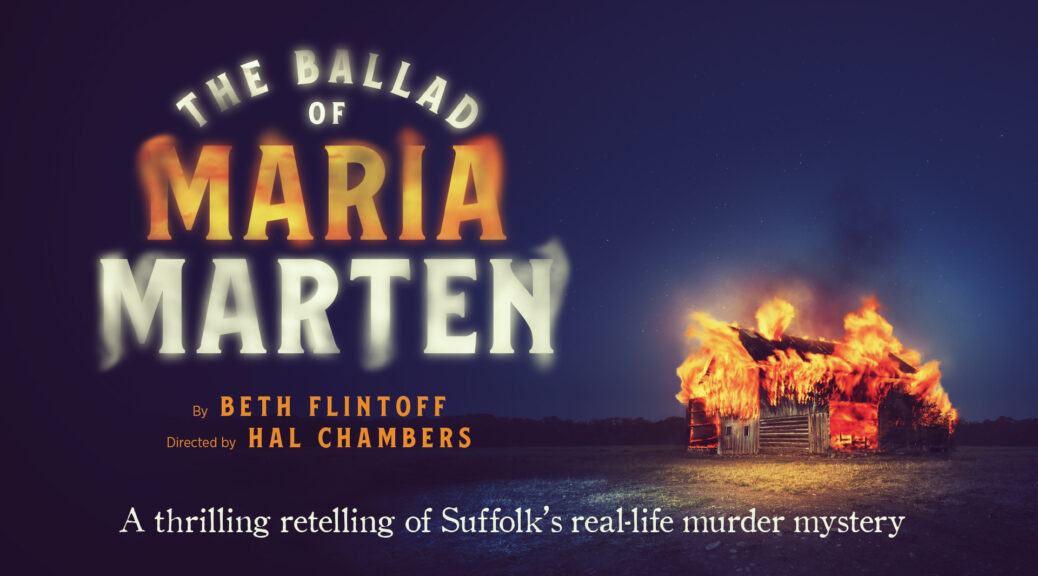 13 or 14 years ago, while studying Drama at school, I was introduced to the world of Melodrama and in particular, Maria Marten. We investigated the parallels between the real life story and its dramatisation for entertainment, performing the show ourselves for both audience and coursework purposes. So when I saw the press release for this, I was both excited and anxious to revisit a story which helped me continue my love of theatre.

The Ballard of Maria Marten is based on the true life events of Maria who, growing up poor, meets and falls in love with a series of fortunate men. Eventually, one of them turns out to be awful, physically and emotionally abusing her, leading to her death. Don’t worry, this is no spoiler – the famous story is known for it’s heroine’s unfortunate ending and a big reason it was taken for the stage. This version looks more at Maria’s side; her background, what she may have encountered, her growing smugness at the attention from rich men, desperately wanting love, when eventually, former failings at relationships leads her to be gaslit and abused. In her story, we also encounter other characters to build this back story, highlighting friendship, family, love and womanhood, motherhood and the difficulties of the era.

Eastern Angels have smartly moved away from the melodrama element. The closest we tend to get these days is the Pantomime, and so, while I would have been intrigued to see a modern day melodrama, this story is taken and performed sensitively and down to earth. It is mostly played straight, with the occasional joke or slight kooky characters, but you for sure believe in them. Once we get to know them and become part of their friendship, the end is all the more emotional and painful.

The performers are all women, and they choose to dress up for the first two suitors. This is effective and genuine and so as we see the relationships progress, it makes her heartbreak and abuse become even more dramatic. Her Father and her final suitor are not shown. While the Father isn’t seen as abusive, it highlights how out the picture he is to her and her life. Not giving the “villain” a face is also effective – Elizabeth Crarer, who plays Maria, uses great physicality, reactions and facial expressions to express his abusive nature and it makes it all the more frightening and disturbing, adding to her deterioration.

There is a huge element of girl power and girl friendships in this piece. My memory to some degree is hazy on both the story and the melodramatic version, but adding these characters makes the show more real. And they are all different as of any friendship group. The amazing thing about this version of the story is that we can relate, and with its reflection on events in the last couple of years. We can relate to a friendship group; of them growing up together and coming of age both together and as individuals. The elements of domestic abuse and murder also pick up on issues in the last few years; of potential home abuse increasing through Covid-19 and the sad death of Sarah Everard and others that have come to the surface. Media makes this shocking and tragic, as it really is but not something, sadly, new.

There is a lovely country feel to this production: in Wilton’s Music Hall, the perfect setting for a play set so long ago. The old furnishings and patchwork walls add to the idea of the countryside, with the wooden barn silhouette on stage – fits as if it has always been there. There is recorded music, music that feels very folk but often they will sing the ballards themselves, harmonising beautifully. Unfortunately sometimes the words were lost to the echo of the space which was a shame when it was so beautiful. They also make their own sounds of objects, babies, horses which adds a real sense of authenticity as opposed to recorded soundbites.

The Ballard of Maria Marten is reclaiming back her story. There are no villains in top hats and capes or over the top gestures as was originally meant by turning this sad true tale into a production, but all the gaps in between are filled in the story with this heartfelt, emotional and at times, funny retelling.