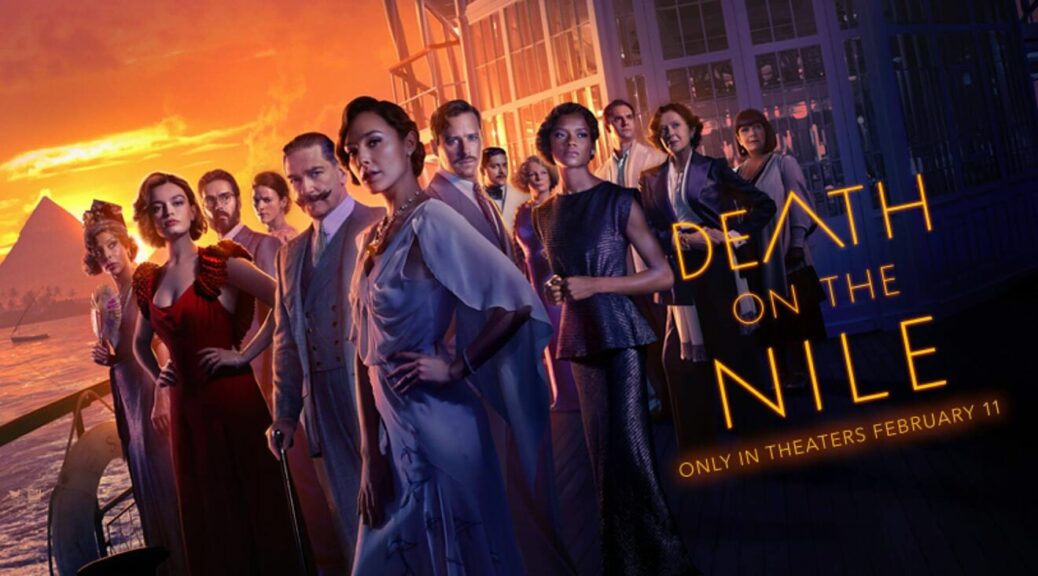 In the midst of storm Dudley, a group of strangers take refuge from the calamity outside. Remaining hidden in the darkness of the cinema auditorium seems like the most sensible thing to do. Settle back and escape into the world of others. To a place that couldn’t contrast more with the climate we currently found ourselves in. Egypt.

Of course, it wasn’t just seeking shelter that took me to the cinema. I had been eagerly anticipating this new remake of Death on the Nile. Although, if I’m honest, having seen repeatedly the 1978 production starring Peter Ustinov as Hercule Poirot, (which I loved) I did wonder if I might get bored, convinced as I was that I knew the story so well that there would be no surprises. One review described this remake as a ‘dumb, lumbering adaptation…’. Not very promising. Yet, how wrong could I be.

Death on the Nile is one in a series of crime novels written by Agatha Christie, featuring her Belgian detective Hercule Poirot. Naturally, then we will expect a murder mystery; a simple set up of victim, a line up on suspects and to be taken through the means, motive, and opportunity to the conclusion of whodunnit. The plot remains the same. A young, wealthy newlywed, Linnet Ridgeway, is murdered while honeymooning in Egypt. She is surrounded by friends and family along with her new husband, each, we discover with some reason to kill. Add to this the arrival of her husband’s scorned betrothed, and the set up for murder to ensue is complete.

Director and star, Kenneth Branagh, it seems to me, had two problems to overcome for this film to work. The first, how can suspense and intrigue be maintained when Death on the Nile is such a well-known story. The second, when even his own creator, Agatha Christie, eventually described Hercule Poirot as a ‘detestable, bombastic, tiresome, ego-centric little creep’ how do you make the main character who will drive the narrative, likeable enough, not to be irksome, fully rounded enough not to be a stilted caricature, and risk losing the audience midway.

This remake begins, not in Egypt but in the trenches of the First World War, the commanding officer reading out the orders that have been received. The fate of the soldiers is sealed. Death hangs over each man. A young Poirot, though, suggests a brilliant but risky strategy. Hope rises once more. His plan is executed. I could hear the muffled gasps in the audience, a moment of tension. The outcome made me flinch with horror. Our first mini rollercoaster. So, the dye was cast, just as much as this vignette gave an insight into how Poirot evolved it made sure the audience understood that we were not going to be on firm ground. We had to be ready to feel uncomfortable at times and be caught off guard.

Fast forward and Poirot looks as he was described by Agatha Christie, enjoying the hospitality of a jazz club, and observing intently the lives of others play out. This is our first introduction to the main characters in this detective story.  Already there are tensions so when the same people congregate in the luxury of Egypt, we know something sinister is going to happen, we’re just not quite sure when.

Life for these people is lavish, sumptuous. These are the rich, surrounded by beauty, able to have anything they desire, and here they display a carefree decadence and gaiety. But in a moment, this can all too quickly be dampened with a sense of foreboding and trouble walks in. It’s dangerous to be complacent.

Deftly handled by Branagh, his sleight of hand, does solve those two problems. What is delivered is the suspense and drama you hope for from a murder mystery.

What those early added scenes do is create a feeling of being destabilised which is the pattern threading through the entire film.  The audience is moved moment to moment from a sense of doom, to calm and to a sense of horror. I, for example, came very quickly undone. Convinced as I was that I knew the killer from the off, as the jazz club scene played out, I became less convinced of this certainty until I was just as intrigued to find out what was going to unfold as if I was coming to the story anew.

As the film progresses, it feels to me that the timeline changes slightly from the earlier makes of this film. The characteristics, life stories and actions of a couple of the characters from previous films are subsumed into different characters. The effect is that you never have one of those moments when you’re able to say, ‘oh here it comes, I know what’s going to happen now’ because nothing maps exactly onto what has gone before.

The film is also beautifully shot. The cinematography is sublime, with glimpses of beautiful vistas of the Nile and the banks of the Nile. And yet, with all its beauty, the effect of seeing the boat, as big as it is, on which the characters reside being dwarfed by the vastness of the landscape adds as a metaphor for no longer being grounded or anything being certain. So easily life can be capsized. The small world in which the action is unfolding looks suddenly isolated and vulnerable, much as we begin to see the remaining potential victims with a killer on the loose.

There are moments when I and the rest of the audience gasp aloud. As you will know if you are familiar with Death on the Nile, or expect if you are not, there is more than one murder. Committed most shockingly. There is a grotesque reality about the way the bodies are seen stored in the most undignified of ways amongst the cold meats. But that is a reality of death in these most horrendous of circumstances. It is cruel.

Much is made of the idea of love in this film. Finding love, losing love. Seizing every opportunity to hold onto it when, living in an era of societal expectations, everything can be lost in a moment, and any survivor left forever heartbroken, no longer the person they were. In this lies motivation. If the audience already know the who, the means and the opportunity, then motivation can remain a seam to explore. The ongoing theme of life and loss, of how everything can be transitory is another way the audience is kept engaged.

There have been some reviews which have suggested Branagh is over dramatic in his portrayal of Poirot. For me though, I loved his portrayal. Of course, Poirot will have moments of melodrama – he’s ‘ego-centric’. Far from hiding his flaws, they are pointed out by one of the characters in the film, and fully acknowledged. With some regret, Poirot acknowledges he is not the man he wanted to be – he wanted to be a farmer – but the man he was turned into and remained as.

We do see a softer, more human side to Poirot. With the sultry, sassy, Salome Otterbourne, played by Sophie Okenedo, Poirot just might fall in love. It would be wonderful to think Branagh would consider a third Poirot film and for that story to unfold. Bringing to life the work of Agatha Christie for a whole new generation.