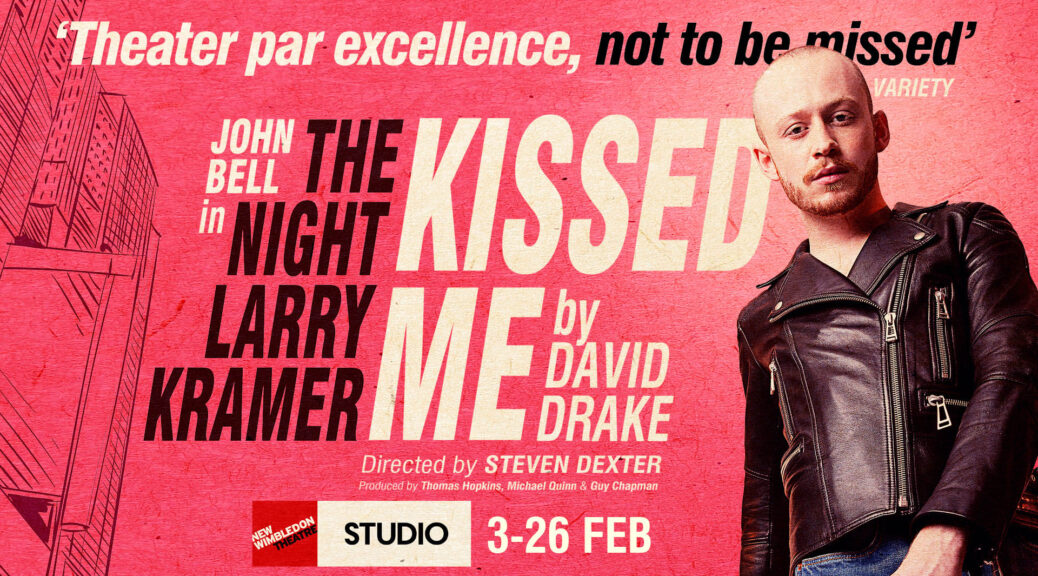 In a little black box in Wimbledon, we encounter the coming of age LGBTQAI+ tale in 80’s America. Next door is a LGBTQAI+ club which I have been to before, and so having this show next door seems hugely apt and hopefully, educational to young people of the community who may walk past and be intrigued by the stand out poster.

The Night Larry Kramer Kissed me, written by David Drake, is a critically acclaimed off-broadway show. Based in 80’s America, we travel through one man’s self discovery in the gay community, awoken by Larry Kramer’s The Normal Heart, showing how Theatre can awaken someone’s passion but also make them question their very existence. John Bell’s (star of Outlander) character uncovers what many men of the LGBTQAI+ community discovered during that time – the impact of the AIDS/HIV pandemic and the fears, concerns, and lack of education around it during this time. It looks at his own discovery of the community and his sexuality, yet also on protesting, speaking out, love and loss.

Bell is in general just perfection. Each word, syllable and speech is perfect, diction and projection on point, and every part of the story he tells feels like it could be autobiographical. He addresses each of us in the room, not afraid to make eye contact, and with such a small theatre, this is important, making us feel included in his story; as if he is just recounting it for the first time with all its elements and emotions. Finding out that Bell is only 24 years old shocked me. I know him well from the show Outlander, where we practically see him grow up as it is, but the maturity and the earnest nature he brings to the character made him seem way beyond his years. While I was also not yet born during this time in history, Bell being much younger than me also shows how in depth he has clearly looked into the history and the impact it had on people of that time. He is genuinely heartbroken; genuinely enjoying life as he discovers who he is; and every aspect of him is fabulous and in keeping of the culture both of then and now. He also flips through ages – a time when he is just a little boy is mixed in with his first kiss as a teenager to finishing as a young-middle aged man. And each mark of his life is clear. A brilliant feat in itself for a performer.

The set was minimal but effective – big crossed metal pipes, stretching diagonally to the sides of the stage, later lit up, make us feel like we are in a city, with its harsh architecture. This is softened by many candles later, electronic, but effectively made to look as if they are really flicking. Subtly put in nooks and crannies are the historical coloured handkerchiefs, symbolising gay men’s position when it comes to interaction with each other, sex and love. A brilliant moment is when Bell is singing/rapping to a song as he discovers different men in a club, pulling out the handkerchief’s and describing each of them, climaxing to an outburst of fear at those who are HIV positive is poignant, fun and eventually heartbreaking. We hear much of the support given in the community and protest at the time, but little of how some turned their back at some point through fear and lack of education.

In a time where we are all fearful of a virus we at the start knew little about, there is some element of reflection on how the community must have felt at the time. However, an element of fun in put into this production, with scenes in clubs and gyms and meeting different people, lovers and how sometimes it culminated in the death of a person puts this on another level. To live life, only to die of it in the end.

Finally, a comment on the costuming – on point for the era, Bell evokes images of Freddie Mercury and the leather fashions of the community and of the 80’s. Eventually, with tee shirts of the AIDS/HIV support networks and protests at the end, this and the telling of this tale is a blast into the history of such a big part of this community and of history in general, something that even today still feels swept under the carpet.

The Night Larry Kramer Kissed me is such an important production to see, not only to learn a impactful part of history but also of a community that, in the 21st century is still facing hardships and censoring. Bell only makes this so much more poignant with his natural and excellent performance.