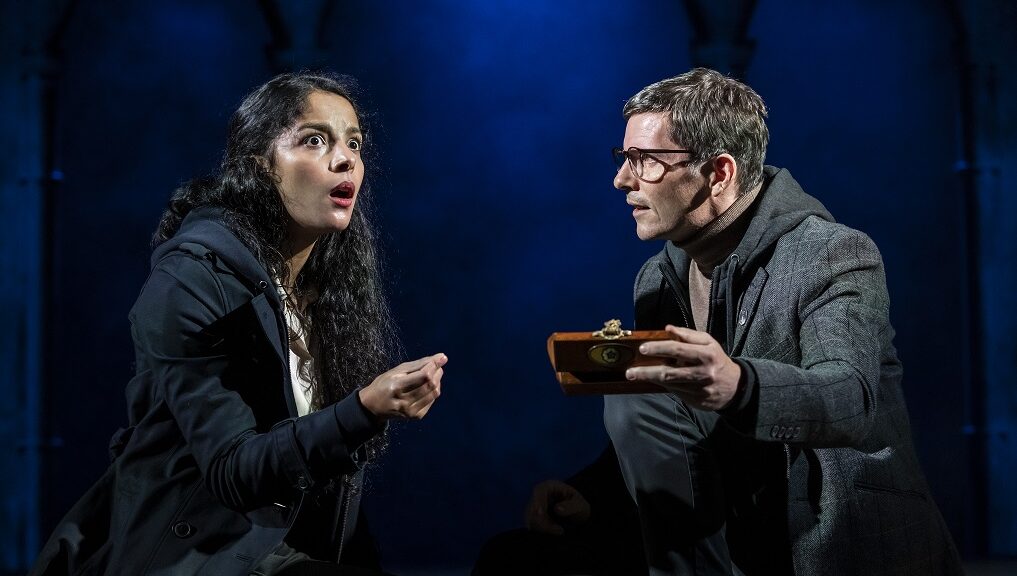 It’s a well-known fact (well, okay, not a fact exactly but often a popular opinion) that ‘the book is always better than the film.’ This is, of course, subjective, as some of us enjoy reading where others don’t, but in my experience, films tend to have to miss out a lot of detail from its written inspiration due to time, budget and varying other reasons. Unfortunately, this is how I felt about The Da Vinci Code. This is not to say I disliked the stage adaptation but that, for me, the book simply didn’t translate well to the stage. As a big fan of Dan Brown’s book, I felt a lot of the action and the detail was rushed, where the detail of the book’s plot, particularly the detail in the symbology, is what it should be all about.

As we enter the auditorium we are greeted with a projection of the Vitruvian Man, the drawing by Leonardo Da Vinci which depicts a man in two superimposed positions with his arms and legs apart and inscribed in a circle and square, representing his concept of the ideal human body proportions. It is a well-recognised piece by Da Vinci therefore immediately transports us to his world and, to those who are already aware of the plot, to the Louvre Museum in Paris. For those unaware of location, we also hear announcements in French telling us that the museum will be closing in a few minutes time, counting us down to the beginning of the play. There is also appropriately suspenseful music playing which unfortunately becomes annoyingly repetitive after about five minutes!

The play begins with Robert Langdon (portrayed brilliantly by Nigel Harman, probably most well recognised for his role in Eastenders) giving a symbology lecture, with a nod to Walt Disney and the Mickey Mouse watch he always wears! We are immediately introduced to most of the ‘cast’ who almost act a Greek chorus, representing bit parts and scene changes, providing summary information, and highlighting important dialogue. All wear hooded tops which they don when part of the ‘cast’, when they’re not portraying a main character. This works well and provides clarity to the story, particularly for those who may not be familiar with it. The piece was excellently cast, and special mention must go to Hannah Rose Caton, who portrays Sophie Neveu beautifully. I am at first taken aback that she isn’t using a French accent but as the action ensues, it’s clear this makes no impact on the role itself. Kudos also to Andrew Lewis, understudy Leigh Teabing who steps into Danny John-Jules’ shoes seemingly last minute (there is no announcement or information in the programme to suggest any cast changes). Having looked forward to seeing Danny John-Jules in this role I am a little disappointed but Andrew Lewis’ portrayal of Teabing is perfect and akin to Sir Ian McKellen’s on screen version. It also appears we are another cast member down, meaning the roles of Sauniere and Remy are played by the same actor, Adam Morris (much to my excitement, having been a huge fan of CBBC’s Maid Marian and her Merry Men as a child!) Morris really steps up to the plate and plays both roles superbly, causing no confusion as to who’s who.

The story travels from the Louvre Museum in Paris, to churches, Teabing’s estate, London, Edinburgh etc. so I am intrigued to see how this is going to translate to stage, the use of modern technology and stagecraft allowing for the audience to be transported from location to location seamlessly. The use of projections, easy-traveling set, a few simple props, and creative lighting design mean we clearly move from scene to scene and know where we are without hesitation. Projections are also used to show symbols and paintings and there is effort to home in on the details of these, particularly at Teabing’s home where we see a large projection of Da Vinci’s painting The Last Supper on the wall which is then zoomed in to highlight its supposed hidden meanings. However, I feel a lot of these moments, often huge revelations in the book and in the film, are somewhat rushed here (none more so than the secret revealed to ‘Princess’ Sophie at the end of the play). Where these moments could be lingered on, the action is packed in to two hours, which just isn’t enough time to appreciate the detail.

There are a lot of clever elements in this production which, with a less intricate story, could have worked successfully. However, I think lack of time, and location (allowed for on the big screen) mean that the detail and the atmosphere of the plot get lost somewhat. Nonetheless, a fantastic cast and certainly an enjoyable production, perhaps better enjoyed without the book lover’s expectations!

The Da Vinci Code continues its UK Tour on February 22nd at the Belgrade Theatre in Coventry and finishes on November 12th at The Alhambra Theatre in Bradford. Head to the website to book your tickets: