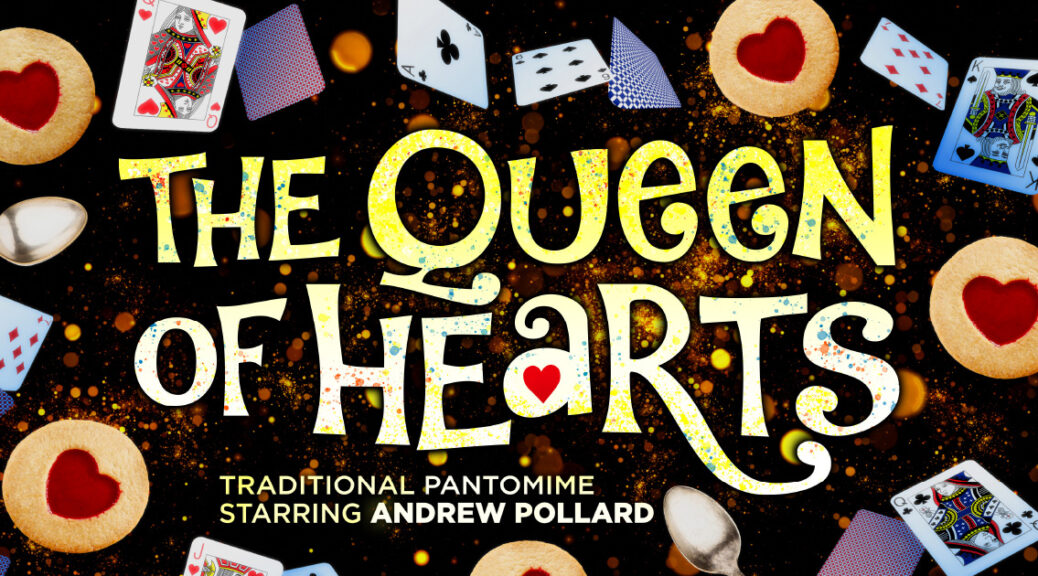 This isn’t my first Panto of the year, but I could happily see Panto after Panto all year long. And so my invite to The Queen of Hearts at Greenwich Theatre reverted me to my childhood of Panto tradition around Christmas.

We are all used to a Panto being based on some famous tale: Aladdin, Cinderella, Snow White e.t.c. so I was massively intrigued by a Panto with a title and potentially a premise that I didn’t know about. Of course all the same elements were there; the audience interaction, “HE’S BEHIND YOU!”, the call and response of the tragic yet loveable sidekick, the moment where audience birthday’s are called out and of course, the pantomime Dame and her ever more extreme costumes and lust for… well… men.

However, The Queen of Hearts is to some degree a new story. Following most of the basic pattern, we see a love story between a Prince and a Princess; Jack the side kicked is over looked; The Dame has been widowed and on the search for her next man, yet is the mother to all and finally, the bad guy is only out to destroy the kingdom and support his own cause. But it isn’t as straight forward, when the twists and turns that usually we would see coming as we know the initial story (think of Aladdin will at some point rub the lamp; Cinderella will run away from the ball). It is new. It is shiny. It is fun.

Not a lot of Pantos have live music either. Usually it’s a recording or if they are lucky to, they are in the orchestra pit. But, much thanks to the Theatre’s architecture, some to just sheer genius, the small band featured on stage and they were every bit part of the production. From the piano player breaking out of his pit to come and act, to the guitarist laughing at every joke, corpse moment and funny improv, them and along with the other performers who clearly loved every moment on stage and had liberty to change slightly and corpse, showing that they loved it as much as the audience.

My only grumble was the absence of two distinctive Panto parts – the throwing of sweets (ok, Covid!) and the song and dance when they are randomly in the woods and sing a song to keep the Ghosts away; slowly being picked off one by one. Sadly, I waited for this bit and it never came. I love the ridiculousness of it and how it never fits in with the story and it was just a shame that it wasn’t in this particular production.

The Queen of Hearts is a fresh and exciting take on the traditional Christmas staple. It keeps to all the things we expect but adds something new and refreshing to the age old tradition.