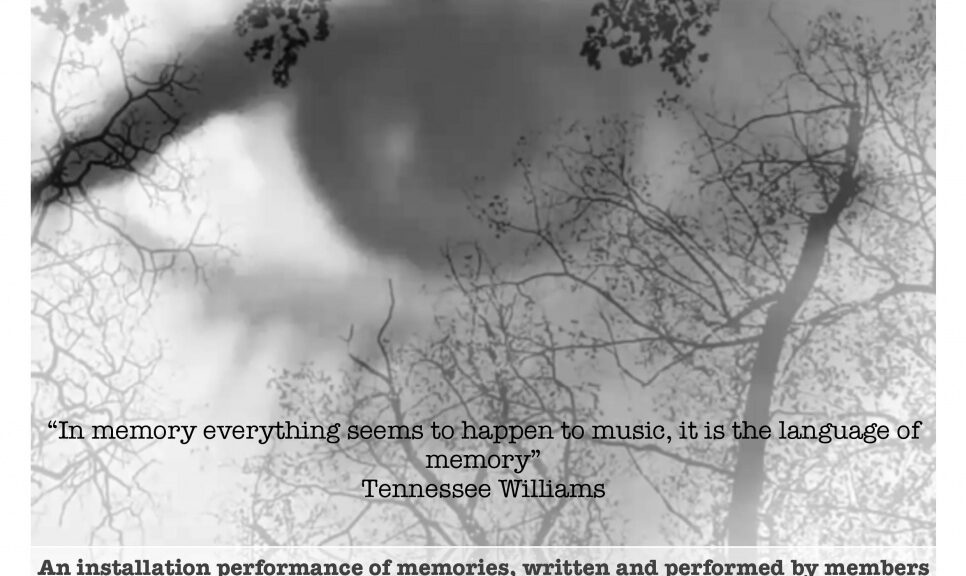 What can you see with your eyes closed? Do you see darkness, or the imprint of light, or a treasured memory? This new production by Company of Sirens, in collaboration with Sight Life Wales, explores the shores of memory and time, the footprints we leave there and the people with whom we travel it.

Beautifully directed by Chris Durnall and Angharad Matthews, With Eyes Closed features performers with sight loss telling stories of their their lives, loves and dreams. The piece originates in a series of taster drama workshops through the Llanover Hall Charity which pre-dated and subsequently continued throughout lockdown. The performers are all so natural on the stage that I was stunned to learn this was their first foray into acting. Precision is difficult; making it look natural is almost impossible – and that’s exactly what they achieve.

This is a theatre piece that moves and breathes like the tide. The stage, transformed into a tranquil shore by Cara Hood’s effective lighting, is the stage for sharing memories, pieces of our lives buoyed by the waves and washed in by the tide. Company of Sirens have always had an innate sense of the ways music and memory intersect, and the music, beautifully played live by Stacey Blythe, is present but not invasive, and it glimmers like sunlight on the ocean. Tales affecting in their simplicity, are told with honesty, joy, and laughter – and, like a wave, the performers often move as one, rising and flowing together as the music shimmers like the sea around them.

Funded by Arts Council Wales and the National Lottery, each story has been filmed professionally and will be shown in the Wales Millennium Centre as part of their Festival of Voice in November – but there’s something special and distinctly irreplaceable about experiencing this piece live; an honesty, an authenticity and a gentleness to the piece which caught me quite off guard. It calls you to wonder what you see when you close your eyes, the paths you could walk guided by memory alone, and who you walk them with.

With Eyes Closed is playing at Llanover Hall Arts Centre Cardiff from 27-30 October at 8.00 with an additional performance at 2.00 on Saturday 30th. Tickets are selling out and Friday is already sold out.

2 thoughts on “REVIEW With Eyes Closed, Company of Sirens by Barbara Hughes-Moore”