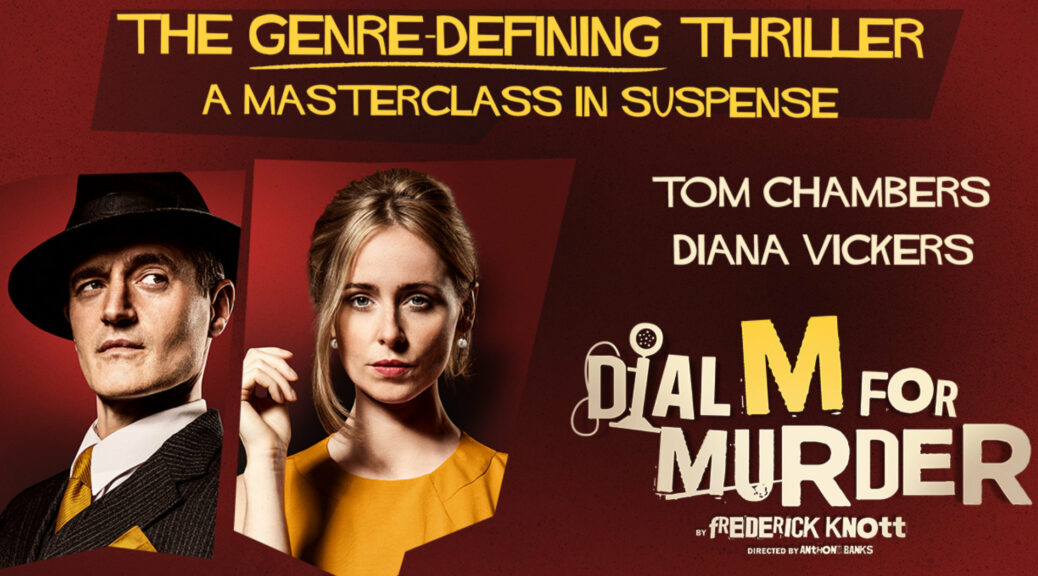 Is there such a thing as a perfect crime? This is the question at the heart of Frederick Knott’s classic play and Alfred Hitchcock’s iconic movie adaptation, which come to life in this stylish new production directed by Anthony Banks. Starring Strictly Come Dancing champion Tom Chambers (Top Hat, Crazy for You) and West End star Diana Vickers (Little Voice), the play follows Tony Wendice (Chambers), a retired tennis player who seems to have it all: a beautiful, rich wife, Margot (Vickers), a swanky Maida Vale apartment, and a perfect life. But when Wendice learns that Margot is having an affair with budding crime writer Max Halliday (Michael Salami), he concocts a foolproof plan to kill her and claim her fortune without having to go through with the grisly deed himself.

It’s great to see Dial M for Murder come to Cardiff, not only because the touring production has been so long delayed due to COVID, but also because the 1954 movie starred Grace Kelly alongside local boy Ray Milland, the first Welshman to win an Oscar. The touring production captures all the thrills of the original, and the cast bring a lot of energy and drive to the story – especially Chambers, who brings a dancer’s grace to Wendice that cleverly underscores the character’s background. He moves through the stage with the elegance of a tennis player, as if everything is still a game to him: there’s a winner, and a loser, rules, technique, and a ruthless urge to triumph. He may have left the game, but it has clearly not left him.

Chambers is the master of the dropped smile: charming and effervescent one minute, seething and manipulative the next. He plays especially well off of Christopher Harper (Coronation Street), who pulls double duty as both the reluctant assassin and the eccentric detective. Harper is chameleonic and effortless in each role – had I not known beforehand, I genuinely wouldn’t have been able to tell they were played by the same actor. Both performances are brilliant – but the affably off-centre Inspector Hubbard might just win by a hair (imagine if Sam Rockwell played Eric Idle playing Columbo). Vickers and Salami ground the action with less showy roles but no less impressive performances, especially in the second half. While the drama hits all the right notes, there’s a surprising amount of comedy to enjoy here as well, not least in watching Wendice’s plan hopelessly unravel.

The cast are buoyed by an absolutely gorgeous set designed by David Woodhead (also responsible for the stylish costumes) and Lizzie Powell’s inventive lighting. Shifting the story to the 60s places it on the cusp of sweeping social and legal change in Britain: this was an era which saw legislation outlawing racial discrimination and decriminalising sex between men, the rise of second-wave feminism, and the end of capital punishment – all of which subtly and effectively underscore the story. Tony and Margot’s relationship is a marriage of new and old money, a fragile union especially in class-shaken post-war Britain. The show itself might be a tad uneven at times, only really dialling up after the interval – and there’s a jarring moment when the otherwise-sympathetic Hubbard roughs up Halliday, perhaps in a nod to police racism – but it’s themes, it’s performances, and the pure, thrilling storytelling are otherwise on-point.

There’s no such thing as a perfect crime because the people who commit them aren’t perfect. No-one is: no matter how clever you are, no matter how much you plan and scheme and prepare, there’s always something you’ve missed. And you really shouldn’t miss Dial M for Murder: the self-proclaimed ‘blueprint for the modern thriller’ might be pushing seventy, but it can still swing for the fences.

Note: this production features a significant amount of flashing lights during scene changes.

If you booked tickets for the original dates of 29 June – 3 July 2021, they will be valid for these performances.