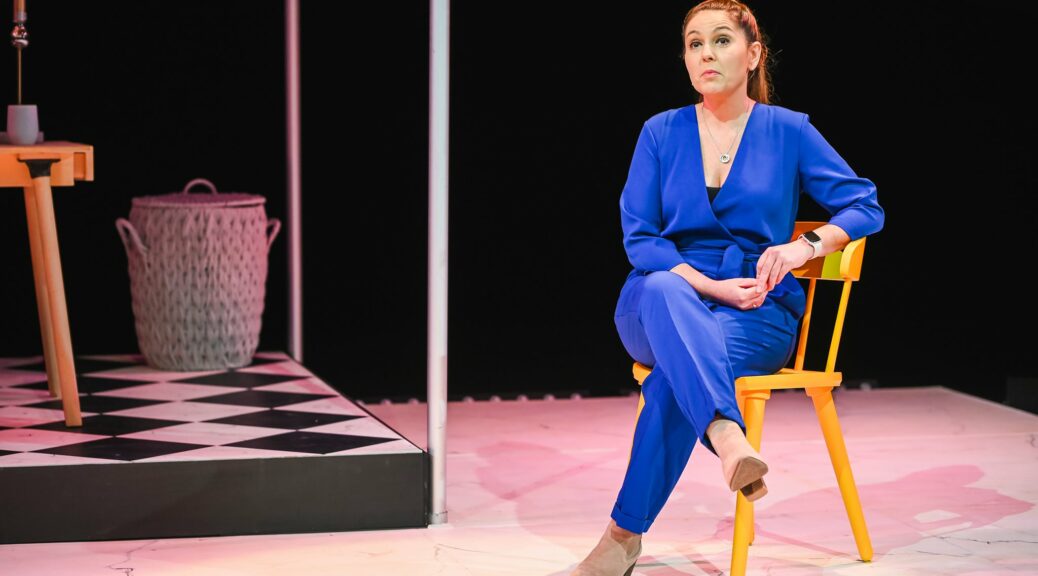 This was my first experience of live theatre in two years, and a new one- as I used the Sibrwd App to access the translation of this Welsh performance. Overall, I found the app fantastic, easy to use, and not at all off-putting, especially considering the style of the piece and the one-way monologue that was being delivered. Utilising the voice of Bethan Ellis Owen could only have made it better.

The play went through stages and had a clear sense of mission. Ani is a lawyer, she is also a single woman- yet she longs for a child. We get the feeling that even though she is a successful woman and has achieved a lot, there is still a gap in her life. After getting pregnant via a sperm bank, Ani starts to experience the struggles of motherhood. When it is time for her to return back to work, Ani is relieved, only to find out that the COVID-19 pandemic has hit and she must stay at home with her son. Rhiannon Boyle must be applauded for the bravery in her writing as well as her skill to bring together the chaos of a story like this one into a well-paced timeline of moments, which we can follow and observe.

The character of Ani was well-thought out- she was brutally honest and raw, which made the audience latch on to her every word from the beginning of the story. Bethan Ellis Owen portrayed the character with authenticity, and presented an energy which engaged the audience at every stage.

The set design by Amy Jane Cook was simplistic and allowed Bethan Ellis Owen to establish the fourth wall. The audience were observing her story from above which I felt was in keeping with the themes of the play: Ani’s loneliness throughout the story, as well as her constant longing for approval from outsiders- e.g her parents, her family members, her nct group, and, of course, the audience. Though her monologue was veracious and really funny at times, there were moment’s where we saw Ani doubting herself in her speech, questioning her morals and some of her beliefs around feminism, which was a clear indicator of the outside pressures pushed onto her. As a woman she is experiencing the blurred lines between what she really thinks and feels, and what she is told she should think and feel. This doubt continues throughout the play and as Ani starts to lose her identity, we recognise that in her, her monologue becomes more chaotic, more disturbed, less positive and vibrant, and she is no longer the Ani we once knew.

Ani’s story is dark and “Anfamol” did a brilliant job of raising awareness of the struggles that many mothers would have gone through during the pandemic. So much so, that I was expecting the play to end on a commentary of the political and social issues of today. However in this case, Ani was lucky to be able to access the right support which gave her a positive new start in life. It is clear that Ani was in a much more privileged position than some women would be. Boyle’s purpose may not have been to slander the system, however she did an amazing job of raising awareness and showing women that they can get the support they need- and that’s ok too.