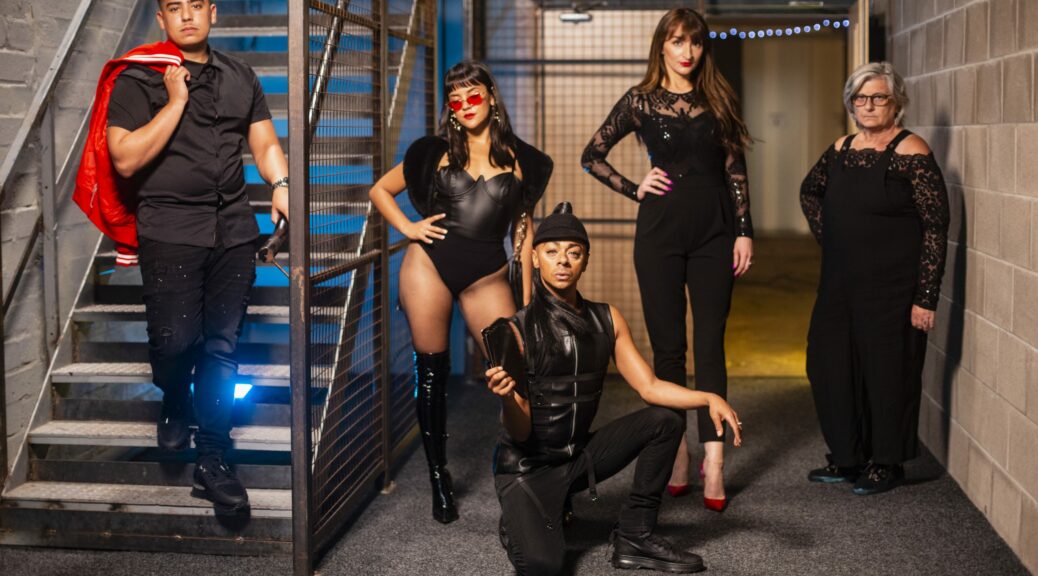 Held at Rumney Conservative Club (no the irony of that isn’t lost on anyone), the audience are invited to grab a pint before they head in to the main space. With tables laid out cabaret style, an open dance floor and a small stage at the back, this performance could be your Nan’s birthday party at the community hall, complete with the ubiquitous tinsel, balloons and disco lighting.

The performers hand out party rings, Haribos and jelly shots as a pianist plays soft jazz renditions of “All of Me” and “As Time Goes By”, creating a warm and inviting atmosphere.

Inspired by Harlem Rent Parties of 1920s America, where working class black folks would perform to pay their rent, “Rent Party” seeks to bring this concept to life with an unapologetically Welsh twist. The show was originally staged Manchester by director Darren Pritchard, but is now being reimagined with artists from across the country, and this particular collaboration with Common Wealth theatre succeeds in creating what the programme describes as “a kaleidoscopic picture of what it means today to be gifted, Welsh and working class.”

At the start of the show some audience members are handed vouchers, and we’re told by our compere Stuart Bowden, that the four performers will each now sing for their supper. We must decide which performer’s story is worth more of our vouchers, and therefore, who can pay their rent this month.

Each performer in turn gets to showcase their unique cabaret talent and talk movingly of their own experience in a monologue navigating class, race, gender and sexuality growing up in Wales.

Bowden, in a high ponytail, black spandex and heels describes himself as the “Margaret Thatcher of this Conservative club”, as he skilfully guides us through the worlds of each of the performers. Each cabaret performance is interspersed with a party game led by Bowden, including a memorable game of limbo where the height of the bar represents social barriers like public sector pay cuts, the average wage, or 1 million people in poverty. It’s more fun than it sounds.

First up is Darnell Williams who raps about Afrofuturism, hope, and coming into his power as a working class Welsh boy from Cardiff. He remembers thinking “no one is gonna make a black boy from Ely famous” but then he reconsiders, remembering black Welsh heroes like Shirley Bassey and Colin Jackson.

Next is Yasmin Goulden whose superb dancing skills run throughout the show. She dances to 1920s style music in a banana skirt: an homage to Josephine Baker. Yasmin talks about her struggles growing up in Swansea having moved from Malaysia, with racist comments and often “being the only brown girl in the room”. She comments “the arguments would start about anything but would always end being about my skin”, and ends her monologue by reclaiming her power as a talented, Welsh working class woman.

A highlight of the show includes Emilie Parry-Williams, a talented singer from Pontypool whose dream of studying at a London music conservatoire is crushed when her teachers make it clear they don’t believe a working class girl deserves to be there. Emilie’s performance of ‘I Could’ve Danced All Night’ (a song sung by a character whose ‘common’ accent has been smoothed out by an upper class man in order to win a bet) brings the house down.

The final powerful performance comes from Jude Thoburn-Price who reads to us from her “book of truths”. This is a piece of performance poetry-come-rap that talks movingly about the effect raising the retirement age has had on her life, the breakdown of her marriage, the freedom of getting older, oh and also the scourge of the dreaded itchy “pound pants”!

The performance can be rowdy and raucous during the upbeat dance and rap sequences (including a RuPaul’s Drag Race style lipsync battle), but is also gentle and intimate, with the performers speaking to us casually and conversationally about their lives.

There’s an undeniable tension in creating a scenario where working class people perform their trauma and show off their talents, in order for us the audience to decide who is ‘worthy’ of paying rent this month. The show displays for us how capitalism has created a false idea of a deserving and undeserving poor, the myth of the meritocracy, the barriers faced by people in society because of the community where they were raised. The show seeks to problematise these ideas, showing you the people affected most by the policies of austerity, and celebrating an array of dazzling talents from working class people.

You can find more information on the companies work here