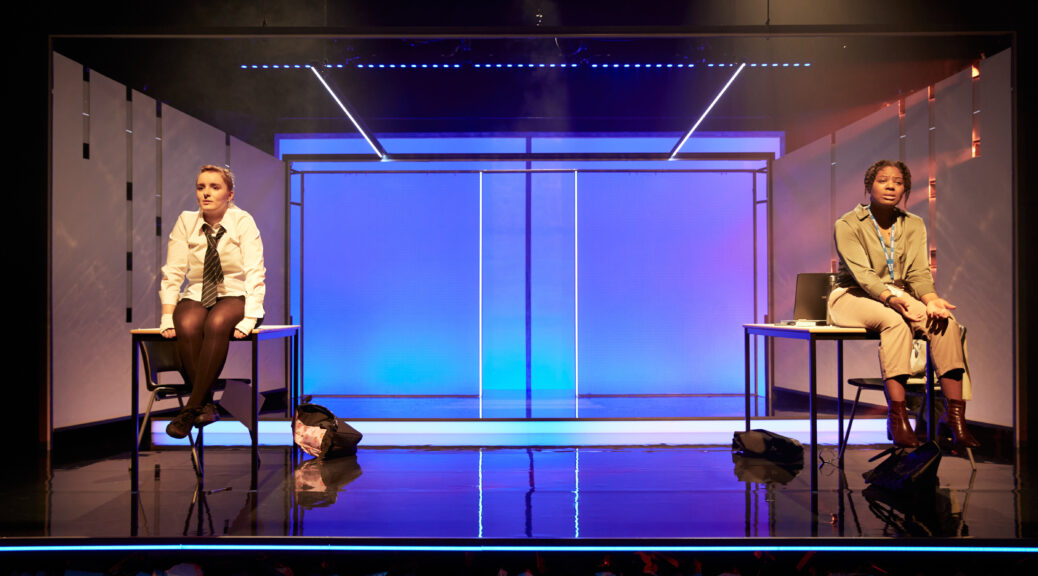 As a born and bred Valleys girl I have mixed feelings about plays that are set in “The Valleys”.  Although it’s great to see these areas represented on stage, in the past I have been disappointed by productions that include stereotypical characters portraying stories that no longer seem relevant (anyone else feel like there is a bit of a theatrical obsession with the miners strike?). As a local, I’m also attuned to spotting a dodgy Valley’s accent a mile off – so, basically, I’m pretty hard to please.

However, The Merthyr Stigmatist written by Lisa Parry is a breath of fresh air amidst this catalogue of out-dated, tokenistic work. The powerful production which had its digital world premiere this week, is the perfect choice for the Sherman Theatre’s first fully staged performance in over a year. It signals a bold return for the Sherman, demonstrating the efficacy of Welsh theatre proving that local stories can have a global resonance.

As the play opens, we are introduced to the characters of sixteen year old Carys and her teacher Sian.  Carys, played by Bethan McLean who makes her professional debut in the production, claims to have received the wounds of Christ.  She believes that this is a sign that she has been “chosen” and is determined to capitalise on the experience to achieve social media fame.  Her teacher, played by Bethan Mary-James, feels that the only way to protect her pupil is to silence her.  Both actors give excellent performances, bringing authenticity to the piece. McLean is utterly convincing as a misunderstood, brash teenager who is desperate to be heard. As the piece develops and Carys learns she is able to push her teachers buttons, Mary-James’ “snobby” Cardiff accent subtly but cleverly slips back into her native Valley’s dialect signaling that she can no longer avoid her past.

All of the action takes place in a Merthyr classroom, the stage is simply set with bright intrusive lighting.  There is little space for the characters to move which adds to the intensity of the piece as the tension builds. The play translated well as a digital piece and, although I couldn’t help wishing that I could watch this performance in the theatre rather than through my laptop, it didn’t detract from my overall enjoyment of the production.

Lisa Parry describes Merthyr as “one of [her] favourite places in the whole world”, it is clear throughout that she respects the area and would like to “stop the stigma”  that some may associate with it.  Whilst the play is littered with local references and vivid descriptions of the area, the beauty of the piece is its universality. The play explores global issues, covering politics, culture and religion.  It raises pertinent questions about the motives of those in power and challenges our perception of truth.

Ultimately, this play could be based anywhere; it is relevant, contemporary and provocative. The fact that Parry has decided to base the piece in Merthyr, shifts the power paradigm, allowing new voices to be heard.  Afterall, as Carys asks – “why shouldn’t someone from Merthyr be the chosen one?”

The production is available to view here online until the 12th of June.

Get the Chance supports volunteer critics to access a world of cultural provision. We receive no ongoing, external funding. If you can support our work please donate here thanks.

One thought on “The Merthyr Stigmatist, A Sherman Theatre & Theatre Uncut co-production Review by Bethan Lewis”