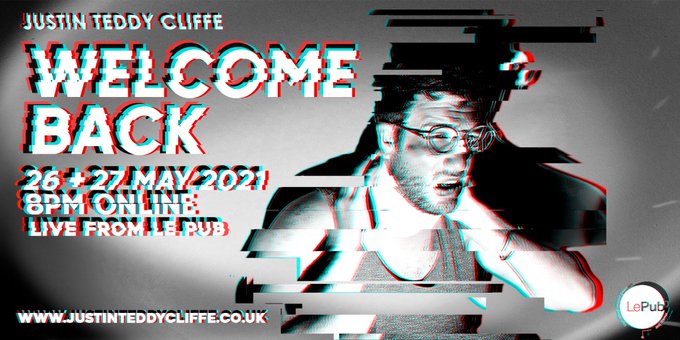 A conflict of interest may be real, potential, or perceived. You must disclose all actual and potential conflicts of interest promptly.[1]

I have only known and admired him in a professional context. Done.

In the fateful words of JTC, ‘everything online is weird and nebulous’, and the ‘South Wales-based performer + theatre maker-come-nonsensical ideasman’, Justin Teddy Cliffe, is no exception. Weird and nebulous figure large in his show, Welcome Back, livestreaming on YouTube, where his particular brand of weird and nebulous is well-worth watching.

Self-created, directed and performed, with dramaturgy by Jeremy Linnell, Cliffe shows up in his underwear on a circular stage the size of a lazy susan — enough space for one man and four cans of beer. I’m guessing the mini stage was a creative decision — it had to be tight enough to get an upstage shot of his arse and still get audience reaction.

Cliffe’s brand extends to a kind of civilised vulgarity, which, if you don’t typically dance to the vulgar beat, try it. Cliffe delivers vulgar on the off-beat — it’s charming, it’s gentle — but don’t be fooled, it’s still a roller coaster ride with heightened realism, giving us an up ’n over view of the human condition in all its pitiful frailty, perhaps a view from the ‘Pepsi Max aka The Big One’ he still dreams of, dreams crushed like his beer cans, crushed, to delineate scene changes. And if you do like to dance you won’t want to miss his beat box R&B number, Right on Time (Choreography, Kylie Ann Smith).

The extent to which Welcome Back is autobiographical isn’t clear. His only character isn’t named. I suggest he represents Everyman. He questions: ’How will we cope going back into the world after having been in survival mode for so long?’ The Universe answers, ‘Who knows, but before you start worrying about all that, why don’t you toast this strange time with a drink or four and dance like it’s the end of the world as we know it.’ And so he does, for all humans and cut-outs to see.

The show deals with mental health, survival modes, memories, self-preservation and accepting change through a contemporary kind of clowning, and backed up by the science of survival we see in a slideshow at the top of the show, designed to assure us when he goes off on one.

His dreams — abstract memories — form the backbone of the show; song, dance and mini-riffs — like the ‘If You Haven’t Done That’ tale about his wild swimming, kombucha drinking, culture growing neighbours — are crack fillers. Cliffe’s recollections are mutually painful  — he hurts, we hurt; he confesses they are ‘not stories I really want to tell, so let’s get on with it,’ a way of bracing himself and suggesting we strap ourselves in, too. And he tackles some tough stuff — but he makes sure that there’s a soft landing, providing billows of laughter at his raucous characterisation and self-styled use of language.

Justin Teddy Cliffe’s kind of humour begs the world to be a kinder, more humorous place. He manages to deliver raw stories, giving us something to really chew on, and edgy messages, sharp edges you’ve got to be mindful of. The combination is a prescription for our well-being: all that chewing flexes and stretches the brain muscles; and those edges require a wholesome flexibility and navigation skills.

Welcome Back is an essential work out.