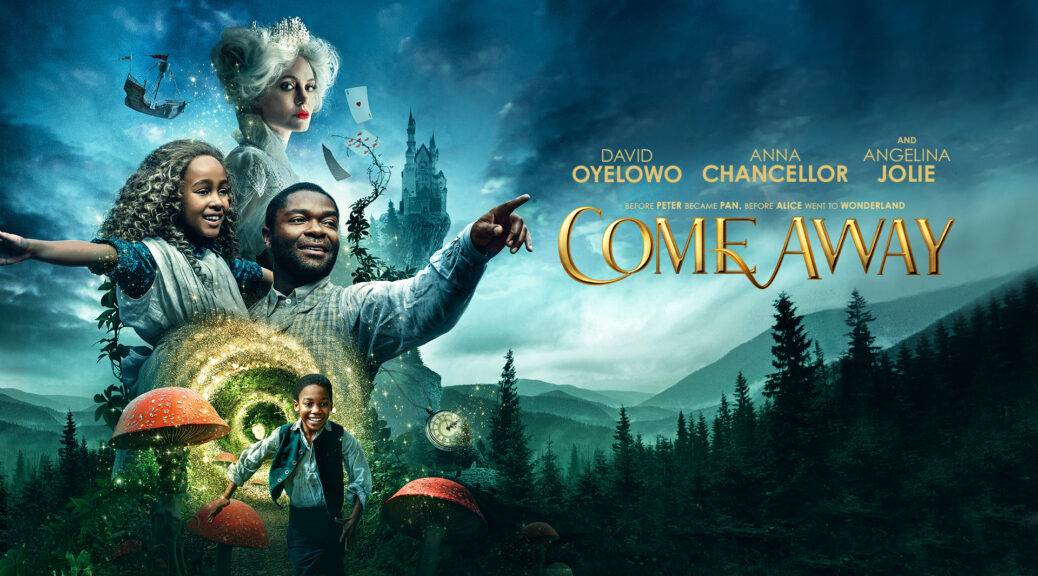 Down the rabbit hole and across to Neverland we go, mix in a personal tragedy and that gives you Come Away. A mixed bag of a film that never seems to know where its own story is going, but yet, there are glimmers of hope within its 94 minute runtime. The film ponders the question ‘What if Alice from Wonderland and Peter Pan were siblings?’ Starring the likes of Angelina Jolie and David Oyelowo, the latter of which steals the show in every scene he is in, but the film primarily focuses on its younger cast, Keria Chansa and Jordan Nash, as the Littleton children, each destined for an adventure. The film takes a look within the imagination of a child, and how certain events, good or bad, can trigger it.

Within the time of the 19th Century, a time without technology or the violence we see today. Three children, David Littleton (Reese Yates), Peter Littleton (Jordan Nash) and Alice Littleton (Keria Chansa) enjoy their peaceful life, full of wonder in their tea parties or adventure in their forest, where either imagination can run wild as they can travel, encouraged by their mother Rose Littleton (Angelina Jolie) and their father Jack Littleton (David Oyelowo), the three children enjoy a happy, fun life. Unfortunately, a dark storm is cast over the family, with the accidental death of David, each family member spirals into a dark path in order to cope with their grief, Rose delves deep into the world of alcohol, neglecting Alice, who seeks solace with her aunt Elanor Morrow (Anna Chancellor), whilst Jack delves deep into his mysterious and dangerous past, costing him the safety of his family. As Alice and Peter seek to aid their father, they travel to London to put an end to their family’s tragedy, if it were only that easy.

The film’s two central characters Alice and Peter Pan, each come from a beloved piece of classic literature. Lewis Carroll’s Alice in Wonderland, first published in 1865, whilst J.M. Barrie created the character of Peter Pan in a series of novels, the first of which came out in 1902 in his novel, The Little White Bird. Characters and story elements are drawn from both books to create this story, and many characters are found in subtle, but unique and unexpected ways. In fact, some story elements are even taken from the personal history of the authors, for example. J.M. Barrie had an older brother who died in an accident, leaving their mother devastated. J.M. Barrie later attempted to take his siblings’ place in her mother’s eyes. Similar to what Peter did in the story. The idea of the story itself first came to the screenwriter Marissa Kate Goodhill when she graduated from college, after taking a class, she wondered about ‘what if Peter and Alice were siblings’ and began working on the script for the film for years. Directed by Brenda Chapman, the first woman to ever direct an animated film from a major studio, Dreamworks’s The Prince of Egypt.

Her unique vision to the film, brought to life hundreds of different places and characters. Visually, the film looks like it had been ripped straight from an animated Disney movie, bringing a fantasy element, the way she is able to combine the real world as well as the children’s imaginations flow seamlessly, between the false and the real. The visual effects within the first half of the film are flawless. Whilst I do have my issue with the pacing of the first act, the first scene is mind blowing. The children are introduced, as well as establishing the general tone of the film. The characters themselves are a mixed bag, with many of the characters we see, a version of a beloved character from the books. With the exception of the family, each character is given a single character trait in order to make them memorable, however, they do this to the best of their abilities, making some of them extremely memorable. Clarke Peters’ portrayal of the pawn shop owner, the Mad Hatter, makes a lasting impact, and whilst only having a few scenes, he makes a lasting impression on the audience. The same could be said for the character of Elanor Morrow, who is this film’s version of the Queen of Hearts, a much more modern take on her character, with her views on class being her aim driving force, and I do think that her character is generally concerned for her sister as well as Alice, and the scenes of Alice and Elanor together near the start are heart touching. But out of every single character, the character I find we get most attached to is Jack Littleton.

Jack Littleton is perhaps the most interesting character, presented as a good father, and an excellent carver, coming from an unsavoury upbringing within the crime world. He is extremely hard working and sets in motion the story that gets their family into trouble, when after David’s death, he returns to his gambling ways. Whilst I do not think any of the characters is more essential than another, Jack is the character that holds the family together, having connections to both Peter Pan and Alice and Wonderland. After David, I would argue that he is a principal character.

However, despite the film’s highlights, there are a large number of issues that I think could have been fixed with a couple lines of dialogue and better pacing, the film could have been improved, significantly. My first major issue is the film’s pacing, during the first act as we led up to David’s death, the film was extremely slow, apart from the fast paced stellar first scene, the film doesn’t improve from there, until the death of David that is, were the film picks up the pace to deliver that in my opinion, the most interesting act, especially the Jack Littleton plotline. The true calamity however is the third act, by far the worst part of the film, a rushed conclusion that never tells us truly what is going on. I will not spoil the film, but, in the final scenes of the film, we are left to wonder what is real and what is not, leading to confusion, which is quite annoying, another issue with the final act I have is the terrible effects, which I am surprised at, since up to that point, the effects stood strong.

The connection between Alice and Peter was well developed, until it was not. At the essence of their relationship, is a strong dynamic, Alice is a child who wants to grow up, whilst Peter is a child that never wants to grow up, and through the second act, their bond is developed, with David now gone to hold them together, they are forced to find their own way, learning to work together. However, the two characters are too separated through the film, for them to forge a connection that was memorable, and therefore, forgettable. They also bring, A List actors, such as Michael Caine and Derek Jacobi, who only appear for one or two scenes. Scenes that I feel could have been replaced with up and coming actors that could have made the exact same effect.

Ultimately the film is bland, it is something special in my opinion, sure the actors make the best out what they are given, but it is not enough to save them from poor pacing and a story that feels unconnected and unhinged. What makes it even worse we that there was a strong and interesting story within the film, the story of Jack Littleton, I feel that the film could have been much better by focusing much more on this, I feel that, whilst I enjoy that particular aspect, the film fails to catch what made is so interesting in the first place. I enjoy the stories of Peter Pan and Alice and Wonderland, the latter of the two much more, however, by combining them, it was given a muddled story, down the rabbit hole they went, but when the story fell, it never stopped falling.

Signature Entertainment presents Come Away on Blu-ray and DVD on 12th April.

Ethan is a member of The Torch Theatre, Young Film Ambassadors, this is a new scheme for those aged 14-18 in Pembrokeshire that will give opportunities for young people to watch, discuss and review the latest independent, UK & International, and blockbuster films. The scheme will give the young ambassadors the opportunity to get their reviews seen, and, to find out more about cinema and filmmaking in focused workshop sessions for aspiring reviewers with special guest speakers.