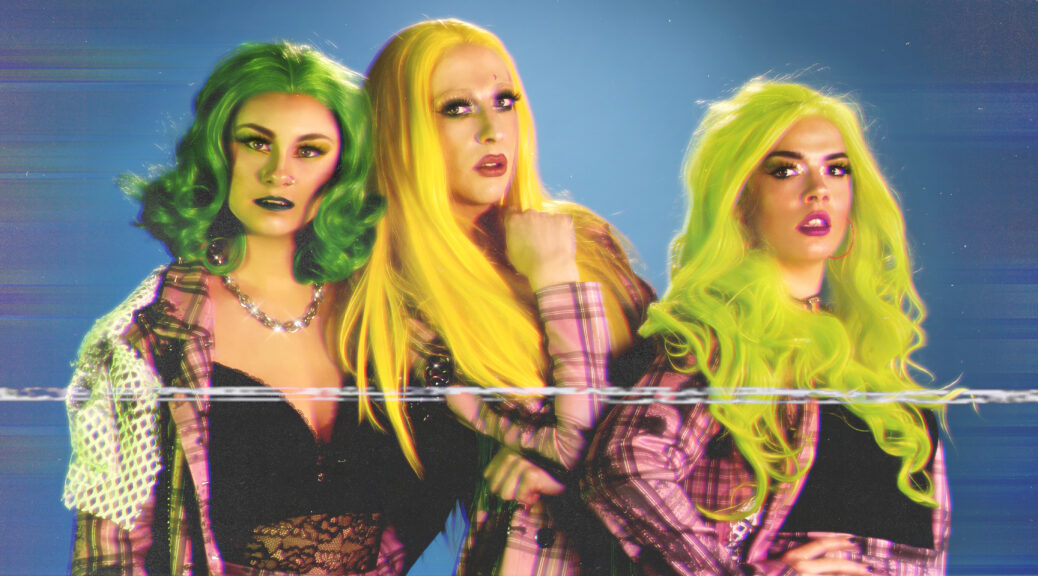 Get ready for a good night out in your living room with Boogie On Up, a series of digital drag performances by Bonnie & the Bonnettes. The exuberant musical trio, made of Hattie Eason, Cameron Sharp, and Rebecca Glendenning, wants to inject fun into our lockdown lives with sequins-embroidered masks and a repertoire full of classic hits, feel-good ‘gay anthems’, some rock, some pop, and a new song by Newcastle-based artist MXYM.

Last year, Bonnie & the Bonnettes succeeded in fusing moving theatre with comedy and music with And She (see review). The pandemic made them want to go back to drag, which they did when they started off, and give the audience a “cracking night out,” as Hattie put it.

Rebecca said: “We wanted to offer our audience something to keep them going and give them a similar feeling to that of when they come to see us live.”

The performances are geared to make people sing and dance in their homes. That’s why the trio went back to their origin of drag performance.

Cameron said: “Drag is something we’ve always done and that we always like to do. I think that’s what people need right now, some relief from tension.” Hattie adds that she was feeling a little nostalgic about being in a theatre and “the rush of excitement, which the audience also feels. It’s the feel of a goodnight out.”

Cameron also tells me: “For us it’s important to give people that sense of community and togetherness. Drag comes from the Queer community. That community now with lockdown can’t happen. So this is our little way of making that community visible and present in people’s lives.”

Hattie said: it’s a way for us to reach people through the universal language of music. I remember a lady coming to me after a show and telling me of an amazing and euphoric night out of when she was a teenager. That’s why we have included 1980s songs. I’d like the songs to bring back great memories for people.’

Rebecca said: ‘in our drag performance we can go places that we might not get to otherwise. We can do some hilarious comedy that it’s just there to make people laugh. You can do it at a very high standard. The whole point is to have an absolute scream!’

Without the energy of a live audience, Rebecca, Hattie, and Cameron encouraged one another during recording and fill the performance with so much energy to get across to the audience. They’d like to see people dancing and singing and posting their videos online with the hashtag #boogieonup

Your boogie nights start in March with two videos to be followed by two videos every month on Bonnie & The Bonnettes YouTube Channel.

Boogie On Up is in association with Northern Stage and Live Theatre in Newcastle. The eight videos were made by TJMov. The original song is by Newcastle-based songwriter MXYM.