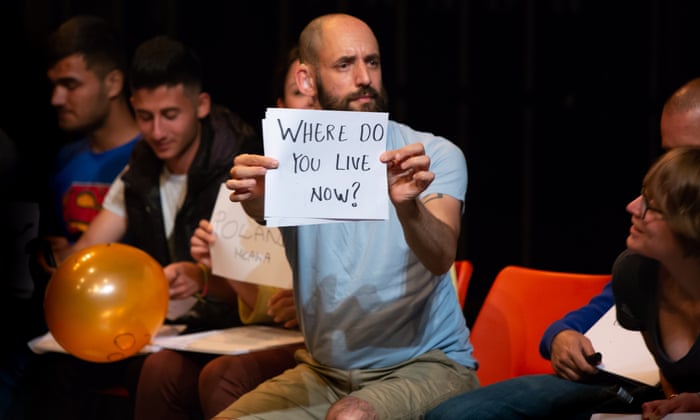 Afternoon tea, Apple, Belonging, Brexit, Cricket. What connects these words and phrases? Well on the surface, not much. In the black box space of the Dance House at WMC, with audience sat in the round and screens at two ends, words from a pre-arranged lexicon flash up in alphabetical order on a screen. With the encouragement of performer Jonny Cotsen we the audience are encouraged to stop the lexicon and discuss anything in relation to these. English is a collaboration between National Theatre Wales and Quarantine and forms part of the Festival of Voice celebration. It is a live performance which is by nature different every night, and blurs the boundaries between creator/receiver and audience/performer.

In typically British fashion, people are initially rather hesitant to contribute to the conversation and instead sit silently in their chairs. For Jonny this isn’t an issue – he is an excellent and engaging storyteller in his own right. As words flash up he regales us with stories from his own life; from planting an apple tree for his daughter, to his time as a shepherd on a kibbutz in Israel, to his struggles during voice therapy learning to make speech sounds by feeling the vibrations on a balloon. As someone who is profoundly deaf and who has only recently started learning British Sign Language Jonny offers a fascinating perspective on the use of English and the ways in which people communicate.

With a strict time limit imposed by the stage manager of 90 minutes, our progression through the words continues apace. As people warm up to the idea of contributing, discussions bounce across the space – from the derivation of the phrase ‘arse over tit’, to a reminder of the poisonous qualities of the ‘daffodil’ Topics of conversation are generally light, with more contentious words such as ‘Brexit’ and ‘de-colonisation’ generally considered the ‘Elephant in the room’ (another phrase on the lexicon) and skirted over.

Occasionally the lexicon is interrupted by a filmed segment, or an invitation to contribute to the piece in another way. These range from the wacky to the surreal. This is a great way of breaking up the structure of the piece and ensuring that the performance never feels too much like an empty void which has to be filled with conversation. Towards the end Jonny encourages us to use alternative methods of communication – instead of speaking we use paper and pen to all contribute our ideas and answers. This provides the audience with some fascinating insights, from people’s first language (English, Welsh, Spanish, Dog) to where they consider home (the USA, Wales, New Zealand, Unsure) and many more. These serve as a reminder that while English may be our shared method of communication, we all arrive at it from different perspectives and angles.

Finally it hit me what the connection between the words was. They were all things associated with English/British identity. It is interesting that a production by NTW does not have more of a focus on Welsh heritage or identity, with Daffodil the only specifically Welsh centered word. Perhaps on another evening, with a different audience this may have come up in conversation. When the word ’empire’ flashed up, it is interesting that the conversation turned to the Aztec, Inca and Mongol Empires rather than the obvious choice of the British Empire. This only further highlighted the anglo-centric bias of most of the discussions of the evening.

The main difficulty in reviewing a show like English, is that while the structure and concept of the show will remain the same, the show that happens tonight or the next night will be radically different in content to the show the happened last night or the night before. So much of the show depends on the generosity and openness of your fellow audience members. This type of collaborative method for creating a show may not be to everyone’s tastes. However if you’re interested in seeing something a little different, in becoming part of a conversation about language and identity rather than just a passive audience member then English is a fascinating piece.