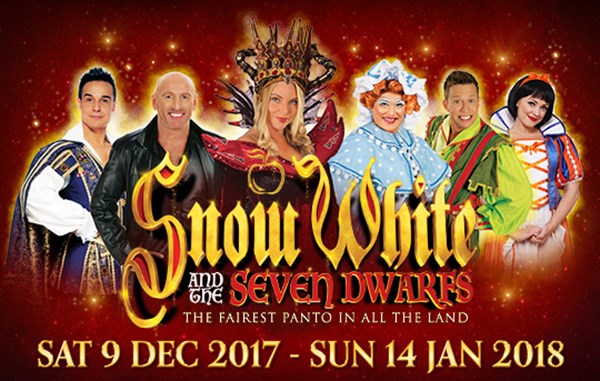 Let me start off by saying this one fact about me; I’ve never been to a pantomime before. I’ve seen them- ITV did a few about 10 years ago – but as for seeing one up close and in person, never before. Although I can remember something resembling a pant in the Park and Dare in Treorchy when I was about 4 years old, but in terms of being an adult I have no memory. So what to expect? Well, pantos are as part of Christmas as the Queen’s speech and James Bond on telly. They’re just good fun for all the family, and Cardiff’s production of Snow White certainly falls into that category. There’s childish humour, for the adults, and grown up humour, for the kids. A good pantomime is always the way to introduce theatre to young minds, and with a brilliant ensemble cast, this one does not disappoint.

A good panto always has the following;

A dame – played brilliantly by Mike Doyle (alrighttttttt)
A prince – It’s Chico time (You may remember him as having a number one single which knocked Madonna’s Sorry off the top of the chart)
The Wicked Queen – Harsh to say this but Samantha Womack played a blinder!
For every Wicked Queen, they have a henchman – Oh Alfie Thomas, the day you finished playing rugby, was a sad day, but the upshot is, you get to play on stage a role well suited for anyone who’s faced the All Blacks.
The faithful friend – Tam Ryan has this comedic role as his own. Warm and very funny – watch for his reactions when he’s not centre stage.
And good, I mean, if there’s an evil witch, there has to be balance, and Stephanie Webber as Snow White is as perfect as the version of the cartoon version of Snow White that we know and love, that you will get.

If I was to be slightly critical, it would be the sound mix on the night. The voice mics sounded too pitchy – but that takes nothing away from the performance of all the cast.

I’ve seen Sam Womack twice this year, earlier at Wales Millennium Centre when she played Morticia in The Adams Family, and then tonight as Queen Lucretia (Excretia – nice touch Alfie). Her singing voice maybe a shock to many, but for me, it’s just something I’ve come to love. Cracking version of I put a spell on you – nice little Hocus Pocus touch! She seems to revel in being bad – and she’s so good at it. Funny, yet evil.

Stephanie Webber as Snow White suited her brilliantly, as did Tam as Muddles. Mike Doyle is Panto Royality having performed for the past 27 years, he truly knows his art and is a master at it. If you want to see how it’s done – you won’t go far wrong watching him.

I could quite easily talk about each person, but I think where this panto mainly succeeds is the family feel of the performers. It doesn’t feel like a “one person topping the bill” kind of show. Everyone is equal, and everyone brings something special to the show – yes, even Chico with a song that probably no one under the age of 14 would remember – yes, “It’s Chico time” is from 2006 – where has that time gone!

So, my first proper pantomime, and no doubt not my last. Go and see Wales’ number one pantomime as it’s at the New Theatre till January 14th.

And in style of panto speak – what about a rhyming review?

They said see a panto, and say what you think
Hopefully, you’ll love and not think it stink

To Cardiff I went, parked by the museum,
Two twenty it cost, well worth it to see them

The theatre is old, and has lots of history
The entertainment it holds, is great, no mystery

Tam is great, Tam is funny,
Comic timing a must, now where is my money?

Alfie’s hacka is a sight to behold,
The AllBlacks humpty, another story of old

Sam Womack’s voice, majestic, amazing, and strong I will say
She put a spell on us all, from the theatre to the bay

A review in some rhyme, might happen some day
Until it does, I’ll do things my way

Because a panto they say, is old hat, not very cool
Well, in Cardiff as such, they’re breaking those rules

Make sure you get some tickets to see,
Wales’ number one panto, recommended by me