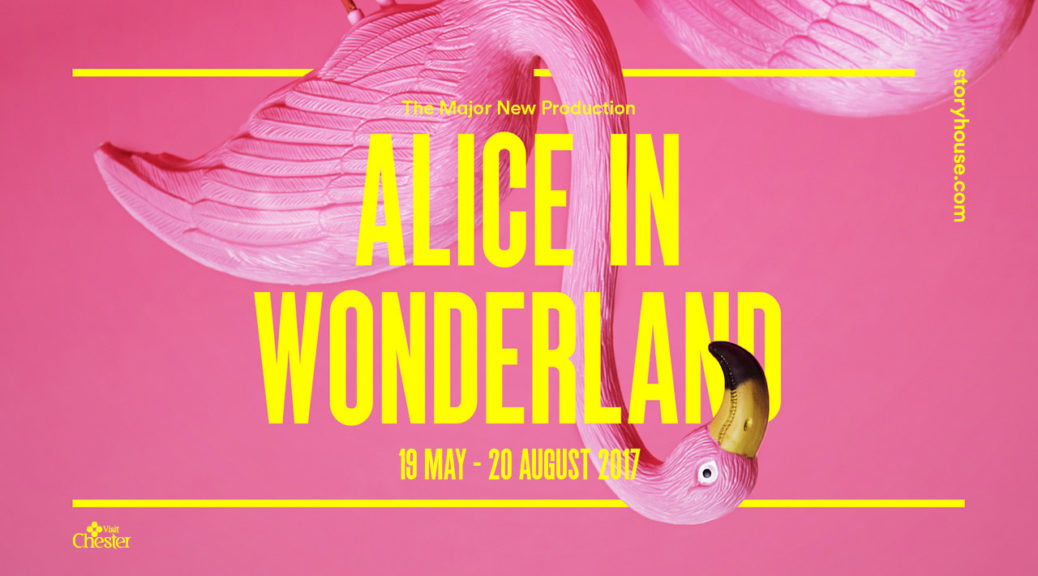 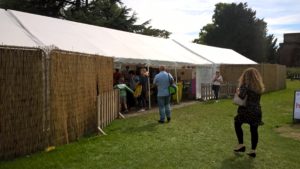 What a glorious day for my first visit to Grosvenor Park Open Air Theatre. Whilst many people were dashing around Chester city centre in search of Pokemon, I ambled along to the city’s park in search of Wonderland. My discovery came in a somewhat fairy tale fashion. Entering through the park gates to see the outline of the theatre, I followed the path around and slowly, emerging from behind the trees, was this towering structure that fitted perfectly with the surrounding landscape. Tucked away in the corner was the marquee entrance. My moment of wonder continued as I wandered in. It was like entering a dream: a popcorn machine, sweets trolley, crafts of miniscule shapes and sizes, decorative displays and signs full of colourful and wispy words. I had certainly found Wonderland. Now I just had to find Alice.

I had arrived a good half an hour before the start time. I took my seat on the picnic terraces and soaked up the atmosphere. It was already half full with excitable children, doting parents and hungry grannies and grandads. People were tucking into strawberries and cream and bags of popcorn. All manner of tasty treats were being drawn from huge hampers (made up for your arrival when you pre-order). They were sipping champagne and clasping coffee cups. Some were slapping on suncream; others adjusting hats and sunglasses. It all felt rather like centre court at Wimbledon.

It was a fabulous build up to the main event. I had already enjoyed myself, and was soaking up what would be the last of the afternoon sun as the play began. I had completely forgotten my search for Alice. Now, there she was. Except there was not just one, but two. First, Anna Leong Brophy appeared as Alicia. Then, Rebecca Birch followed as Alice. Two best friends with similar names and a slightly different take on Lewis Carroll’s famous tale. Glyn Maxwell’s adaptation of Alice in Wonderland sees Alice (Birch) descend down the rabbit hole first. There she meets not only the White Rabbit (Tom Connor) but all the other eccentric characters too. Caterpillar (Jonathan Dryden Taylor) is a science teacher. Humpty Dumpty (Daniel Goode) likes his food a bit too much. The Cheshire Cat (Caolan McCarthy) is suitably clued up on Cheshire history. And, of course, the Mad Hatter (Alex Mugnaioni) is as mad as ever.

In Maxwell’s adaptation, Alice’s journey through Wonderland ends in her becoming the Red Queen. The second half of the play sees a rescue mission of sorts take place. Alicia (Brophy) descends down the rabbit hole in search of Alice. Both their journeys are full of wonderful wordplay and hilarious humour. There is a smorgasbord of accents among the cast of characters which add an extra dimension to their individual personalities. Above all else, the audience interaction is brilliant. It provided an extra layer of enjoyment and laughter. It also drew you into this strange and exciting world. I found myself welling up once or twice as the actors engaged the younger members of the audience. In particular, one little girl (who had come dressed as Alice) was given a high five by Birch on her final exit. I can’t imagine how special that would have made her feel.

The whole cast gave an accomplished performance. The musical ensemble was brilliant and worked well in the absence of technological sound effects. There was one person who caught my eye in particular though. Tom Connor was fabulous in all his guises. His physicality and facial expressions as the White Rabbit and March Hare were a joy to behold. His animated performance added much to his comic value. Even when out of costume and simply part of the ensemble, he was engaging the audience and looked in his element. That natural enjoyment speaks volumes and only adds to the audience satisfaction. 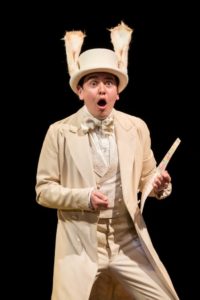 It began to rain towards the final few minutes. It did not dampen the spirits though. This was a fantastic two hours full of fun and frolics. The team behind this production should feel very proud of their achievements. From the exciting entrance to the performance itself, the whole experience immersed you into the weird and wonderful world of Alice in Wonderland. I couldn’t think of a better way to spend a Sunday afternoon.