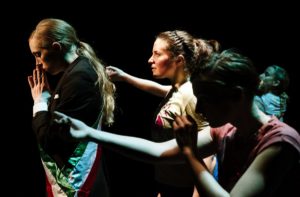 When we think of a Bucket List, it tends to be what we want to do before our final ending.

Full of ideas of endings, Bucket List at the Battersea Arts Centre takes on a fictional tale which is very much transferable to modern day.

Based in Mexico, we meet a little girl who goes through a traumatic short life. Basing it upon political issues between the USA and Mexico, we see many disastrous events from pollution of Mexico, to the corrupt ‘policia’ with suspicious deaths, rape and drug use. Milagros witnesses all these awful and terrible events and decides after finding out that she is dying, that those responsible must pay.

A small group of performers, all female, bring a strong cast to this stage. Ranging in ages, each of them present such interesting and energetic performances. The main cast double up on characters which are seamless and well- constructed – ranging from children to adults to different genders. To help with this, occasionally a prop or piece of costume is used but while this aesthetic is welcomed, it isn’t always necessary.

My only issue with this was with accents – throughout the production it was evident that the English native speakers were able to adopt a Mexican accent, but for whatever reason chose not to for some main characters and when changing to another accent, managed this with no issue. It was slightly confusing when this became a revelation as it felt slightly inconsistent.

What struck me however was the level and grace of the physical theatre involved. Much of the production used this technique to change places, to represent different events and feelings and it was fantastic. The performers had so much energy, were able to move seamlessly and almost seemingly with little effort and this as a performance itself was as intriguing as the narrative.

Live music and singing was also a great addition – a simple drum set and percussionist providing some of the background and a guitarist and phenomenal singer at times providing a singing narrative, becoming the corrupt characters in her androgynous style, made this production a little bit more special than it already was.

Bucket List is raw, exhilarating, intelligent and fantastic. And with the current political situation in America and Mexica, very poignant and modern.