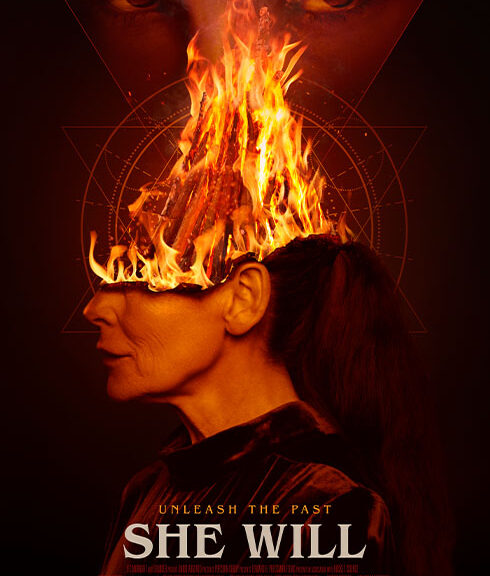 Contrary to so many horror films that over the years have depicted nature as the enemy and their female protagonists as victims, Charlotte Colbert’s She Will is a tale of personal and collective trauma and empowerment found in a deep connection with the land.

The film opens with the ageing film-star Veronica Ghent (Alice Krige) in a luxurious art deco train compartment taking Traumadol to relieve the pain from a recent double mastectomy. She is travelling with her young nurse Desi (Kota Eberhardt) to a retreat in the Scottish Highlands. At their arrival, they are met with exaggerated characters headed by Tirador, played by Rupert Everett in a little too caricatural Oscar Wilde pose.

All around is a wild and bleak forest that was once the theatre of the execution of women accused of witchcraft. The ground has absorbed the women’s power, be that of witches or of victims of a misogynistic crime, and it now insinuates itself in Veronica’s life bringing healing as well as power.

Director Charlotte Colbert excels at weaving together the physical elements of the forest with the symbolism of trauma and healing. The ground penetrates into Veronica’s cabin as a black sludge and into her dreams as nightmares. It liberates her from the shame she feels of her scarred body, deprived of breasts, symbol of femininity. It also brings redemption from the childhood trauma of being sexually exploited by the director of the film that launched her career, played by Malcolm McDowell. As Veronica embraces the power in the mud, her spirit haunts the film director who commits suicide.

Alice Krige dominates the film with intensity, subtlety, and charm. Krige’s Veronica is captivating in her transformation from a former film-star clinging to beauty by masking her body to an empowered woman with no fear. It is ironic that she played the evil witch in the faux feminist Gretel and Hansel that was so rife with misogynistic themes (see review).

The film is at its weakest when it leaves behind symbolism and tries to portray real characters and situations. Veronica’s relationship with her nurse Desi has little life in it notwithstanding solid performances. The attempted rape of Desi by a local young man is contrived, only serving the purpose of presenting an example of misogynistic violence which is punished by the revengeful forest. Other characters are a little too incidental adding little and at times disrupting the cohesiveness of the film.

Aside Krige, it is the physical and mental landscape that carries the film conveyed by the striking photography of Jamie Ramsay who fuses together the haunting images of Veronica’s nightmares and fantasies and the dark and sinister landscape all around her.

The choice of Scotland as a setting resonates historically. Between 1563 and 1736, an estimated 3837 people in Scotland were accused of witchcraft, a much higher proportion than in other European countries. 84% of them were women. It is estimated that over 60% of the accused were executed. This historical injustice has been addressed by the Witches of Scotland campaign, which has led to an official apology by First Minister Nicola Sturgeon and has inspired movements in other countries.