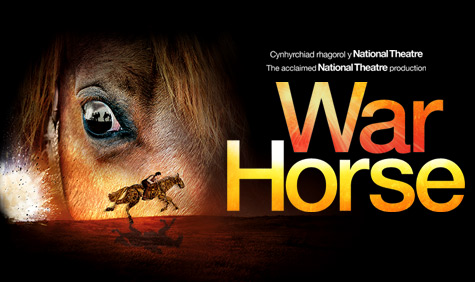 It seems fitting that in this year, 100 years after the end of the Great War, War Horse has gone back on tour around the UK, currently playing at Wales Millennium Centre.

Based on the 1982 book by Michael Morpurgo, it tells the story of Albert and his beloved horse, Joey. At the outbreak of WWI, Albert and Joey are forcibly parted when Albert’s father sells the horse to the British army. Against the backdrop of the Great War, Joey begins an odyssey full of danger, joy and sorrow, and he transforms everyone he meets along the way. Meanwhile Albert, unable to forget his equine friend, searches the battlefields of France to find Joey and bring him home.

Bringing this story to the stage happened in 2007 with the National Theatre production, and in this 10th year, that production is the same now as it was then.

You won’t fail to be impressed by the puppetry of Joey, as a foal or as a full-grown horse (South Africa’s Handspring Puppet Company providing both brilliantly). Little touches within the performance like the goose, send you to another place where you don’t see the human performers, you just see a goose, horses and scavenger crows. The cast performance itself is something quite unique. It’s like a musical number. Each step is carefully choreographed so each movement between puppet and person blends seamlessly.

The main thing I found though, is the sound. It’s just epic. With a soundtrack of some music and song, and the effects of war, you can’t help to be immersed into the story – just watch if you have a dodgy heart, sometimes the effects can just grab you out of thin air, and you’ll end up in the ceiling of the WMC. With the sound, comes the lighting, it wouldn’t work one without the other. It brings the war fields of Europe to the very heart of the staging. There just seems a sense of foreboding with each lit movement on stage.

It’s rare that I feel uncomfortable in watching a performance, but the second half, I felt just that. It’s a strange thing to explain, but it felt like you were watching something truly awful, but I could also not take my eyes away I felt so immersed in the performance.

I’ve only ever managed to catch the last half of the film, and not read the book, but I don’t feel I need to with either medium, as a play, this will give you food for thought, and be thoroughly entertained.