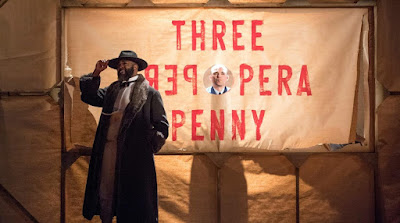 It is very rare to come away from a performance and struggle for words. Whether they be good, bad, indifferent. In the case of Threepenny Opera, the sheer perfection of this production left me gobsmacked and lost for words at this phenomenal production.

From the fantastic theatre practitioner Brecht, the performance hits every note of his theories on the performance not letting us as an audience relate but self-reflect and critically review the political scenario of the performance. In the current climate when the UK has left the EU and there are turbulent times, a performance where the hero is an anti-hero, and the good guys are just as corrupt as the bad guys, it’s hard to not find a similarity to what is happening in the World currently.

Threepenny is humorous, it is dark and it is clever and brilliant. Each performer has delved into their character, changing their appearance, stance, movement to relate to them. While we have our ‘main’ character, each performer stands out in their own right, some even doubling up roles but this is hard to notice with how well they change themselves. Not to mention the satire of Opera as a theme itself – an industry well known for being stereotypically middle class, this Opera is from the poor and the down and out; it’s for us normal people. Not to mention each performer’s wonderful voice showcasing that it isn’t just the middle class with talent.

ThreePenny is darkly comical, with a staging that is reminiscent of unusual world’s created by Tim Burton; the odd but strangely  enticing world created in Golem by 1927 which showcased in Trafalgar Studios last year, yet is still entirely new and beautifully constructed.

Threepenny is nothing short of perfection. And a production that you must tick off your bucket list.