In the top of this theatre pub, the Clapham Fringe has been conjuring an array of performances. This day, I happened to be seeing the show ‘Choosers’.

Choosers sees the meeting and friendship between two homeless men. Spanning only a few months and based all around one park bench, these two unlikely kindred spirits meet, and we are introduced to their past present and future.

The set it simple – one bench, the younger homeless man with a suitcase of bits and pieces, the other with only what is on his body. There are leaves pinned to the staging and strewn across the rostra to give that ‘park feeling’.

Our younger performer is a university student who has run away from his course, his home and his responsibilities, feeling unloved and unseen in comparison to his marine brother. The older, full of secrets, some of which we never find out, has been homeless for 5 years out of choice.

Both with a different story to tell, yet both choosing this life, our views on the homeless are challenged, from not only why they have chosen to become homeless, but to the way they live – the older actor says that begging isn’t right and that it should not be done. He makes friends to find food and we soon warm to him as he warms to the younger performer. The younger performer is annoyingly young – perhaps slightly stereotyped, he is bouncy and full of naivety. At times it’s hard to keep up with his fast paced approach to the character, and becomes a little exhausting with consistent pacing.

Overall Choosers is a lovely performance, full of friendship and warmth, contradicting the world views on the homeless. Well worth a watch if you are able to keep up with the speed of the university character. 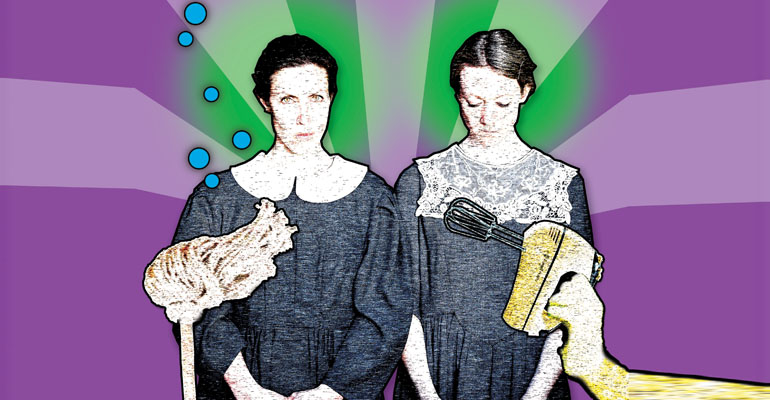 A taboo subject, even in the modern day – we are still unsure about how to approach the subject of mental health. While it is understood more today, to be a woman and with such a medical condition back in the 1920’s was something that was frowned upon.

Telling the story of two women, Weird Sisters Theatre Company give us the stories, the relationships and 50 years in an insane asylum. We meet Persephone who as a young 21 year old is brought to the asylum for her relationship and bearing of a child with a married man and is thrown together with Dora, a gender confused woman obsessed with the military.

Two different characters, each scene shows the back and forth from the future to the present day. The performers do well to switch the characters and their growth from originally making no connection, to becoming the best of friends. Simple light changes from a blue for the beginning of their relationship to a red for the future, we get a sense with the acting of their progression of friendship.

The writing is clever in its use of phrasing for the insane, opinions expressed by others and themselves with drawing upon ‘witches’ and sorcery; Dora’s obsession with the military and stories of historical strong women gives us a sense of pride in feminism but also anger that these views have led her to incarceration due to the threat of the patriarchy of the time.

As years pass, there are hints of the 1950’s, Doris Day and other elements through time, while the characters stay in their plain, Victorian-like clothing. We are lost in the sense of time with confusion of where we are and what is happening – a good way to mirror to the audience how the character’s must feel with the mundanity and repetition of institution life.

Without revealing any spoilers, the performances and writing pull at your heart strings and make you feel for the characters. Simplistic set, lighting and gentle sound does well to highlight the performance but not take away from it.

Airswimming is clever in its look at mental health, bringing it  to the forefront not just for women, but everyone and also highlights the importance of friendship.