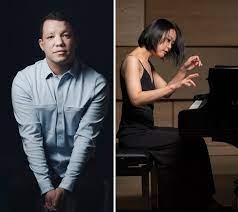 Piano Concerto No 3 by Sergey Rachmaninov

A star performance of Rachmaninov’s third piano concerto – said to be one of the most difficult and challenging of piano concertos in the concert pianist’s repertoire -by the multi-talented South Korean pianist Yeol Eum Son was the choice of the BBC National Orchestra of Wales for their opening concert of the season. Performed to a packed audience at St David’s Hall in Cardiff last night. (October 6th) and broadcast on BBC Radio 3, what a night it was! A diminutive figure in a black evening dress, soloist Yeol Eum Son gave those fortunate enough to secure a ticket an evening to remember. This powerful concerto, composed in 1909 but not given full acknowledgement until several years later, then becoming increasingly popular in the 1930’s when it was performed to great acclaim by Vladimir Horowitz, was given a supremely sensitive all-embracing performance throughout by Yeol Eum Som.

The opening movement, Allegro ma non tanto, was interpreted with sensitivity and skill, with Yeol caressing the keys as a lover might caress his or her beloved, to change into a powerful full throttle engagement with the keyboard. With her fingers flying so fast that at times the sight of them became a blur, this tiny almost unbelievably slender young woman switched effortlessly from the gentlest of melodies to the powerful octave-spanning moves that make this concerto a concerto to be feared for some soloists., thus making this performance a rare and special occasion. Yeol Eum Son’s ability to control and shape every poetic nuance – much in evidence in the great solo cadenza – plus her fearless and bravura attack on the most difficult of passages is awe-inspiring.

For the Intermezzo: Adagio-un poco piu mosso – a set of variations by the orchestra alone gives temporary rest to the soloist, notable among these at this performance being the short flute solo, performed with feeling despite its brevity, followed by solos from oboe, clarinet and horn. Then the piano bounces back with a powerful yet melodic attack on the keys ferocious in its brilliance, segueing seamlessly into the Finale Alla breve and a vigorous ending.

Full credit to the BBC National Orchestra of Wales under the direction of their leader first violinist Lesley Hadfield. The rapport between the soloist and the conductor Ryan Bancroft, who have worked together many times was extraordinary and no doubt contributed to the high standard of a performance that had the audience shouting for more and bringing the soloist back four times. Broadcast on BBC Radio Three, this memorable performance gave its audience and those who listened at home, a night to remember and an opening night that bodes well for this great symphony orchestra during the coming season.

Please note due to ill health, Barbara reviewed only the first half of the performance.