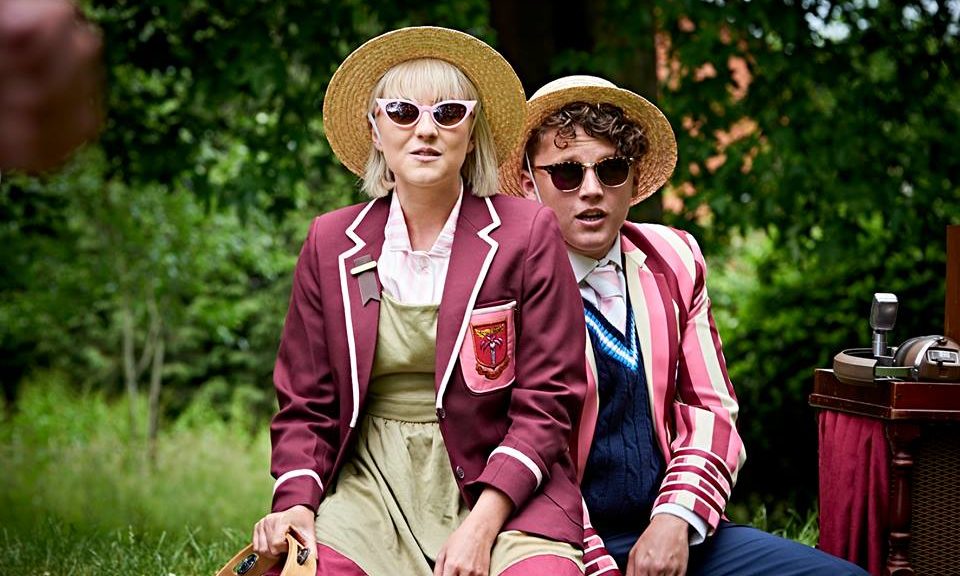 Shakespeare’s Romeo and Juliet couldn’t be a more polarizing play – that controversy, and of course it’s impenetrable brand, the reason for its longevity, despite the criticisms it’s been subject to throughout the ages. It also means every adaptation, no matter how well done or brightly framed, will have a clear divide between its fans and its skeptics, much like its own warring houses.

It immediately reminded me of Everyman’s 2014 production The Taming of the Shrew, which also played with a modern framing. In that case, it seemed disjointed and unconnected, this play’s firmer stance something I was glad of. An early warning sign was the wrapping of garish warning tape around the gorgeous set, itself an understated stage that easily turned from crumbled history to a modern ruin in the mind’s eye. Any foreshadowing in the archetypal tragedy seems dangerously close to being too loud for too little reason. Then, I turned thoughts to Last year’s As You Like it set completely within its time, which seemed less frantic to be thoughtful, its simplicity its making.

The scuffle between the houses was presented in a haze of echoed dialogue, each line chanted rather than spoken, chaotic drumming and West Side snapping fueling the anger. It was no doubt intended as a display of raw energy, but mine surely weren’t the only ears strained by a jarring start. A question common to the staging was that of cleverness or (with all such words improperly conveying the fact every polarizing part was played with conviction of delivery) clumsiness. Aggression dominating over clarity and a sense of unease are fitting for the play, but it felt a little rushed, easy to think about but harder to feel for – the presentation of the raw feeling ironically calculated.

Another of these dichotomies was the fact that Paris is shown sauntering through the warring families, often an agent of the discord the one to bang the makeshift drum of the stage – this could give the often slight role adaptations afford him gravitas, but there is too little of him otherwise to give weight to the staging.

Whilst experimentation is always welcome, the elements seemed jarring and improperly integrated, a few, small things that, in never fully being justified spoiled the flow. Costuming was fine, but slightly awkward with our leads, owing a tad too much to Danny and Sandy. The thing that dominated over everything, making niggles more off-putting, was that the overall transference to the modern day seemed slightly arbitrary – a live performance in the beautiful Sofia Gardens is certainly not the slickly edited City from Luhrmann’s fondly remembered film, and whilst it could be left to interpretation in another play, the fraught world of our times providing myriad examples of arbitrary, baseless conflict, the other small jarring features meant either that these less important things should have had some justification, or that this time leap needed more obvious suggestion.

The acting was certainly the best element.

Mikey Howe presented himself as a likable actor, but not as a Romeo stripped of the blandness which pervades even the best of his adaptations. He more often solicited motherly feelings of exhausted affection and useless foresight rather than showing us a passion we might forgive naivety more for. Mercutio was played memorably by Jon Barnes, remembered fondly from last year, the acidic chemistry between him and Asha Cecil’s flint like Tybalt alluding to something more complex and engaging than the titular love. Helen Randall’s Juliet was stunning, and did her best to convert us to her convictions with not just a sweet, but quietly intelligent and witty character, her superb delivery highlighting the odd dichotomy that one of Shakespeare’s most characters most scolded for their lack of better judgement has some such clever lines, full of wordplay and conviction. Another highlight was James Pritchard’s warm and fatherly Friar – although the general depiction of such is always odd, considering despite his gentle ways, he is the piece’s accidental murderer.

The anger was the most visceral, best felt emotion of the play, each character, Tybalt to the Montagues doing their best under rage, although such venom by the ensemble made Romeo’s anger seem a little paler than the devastation of the second act required.

Said second act was free from trips over the awkward trappings of the first allowing for a much smoother experience, beautifully and purposefully lit, each actor at their finest in this hour.

A fun, but at later thought somewhat frustrating decision was that to possess the apothecary by the devil – gleefully sadistic at first glance, and a synchronization of the ensemble used to much more coordinated and singular effect, you then realized how much trouble it presented. Shakespeare, here to Lear to his famous sonnets, was always interested in the conflict between the power of the damnation of God (and the Gods) and man, and how the devil is a part of both self-corrupting man and the omnipotent Lord who shows such little benevolence in his works.

This is the essence of the general trouble – that the productions experiments just don’t have a solid enough foundation to be felt more than gimmicky, when the more general elements are is all wonderfully done. Ironically, and somewhat sadly, when focused more on style than the unsure statements there was much more substance. In short, it’s a commendable performance with a lot to chew on regardless of whether you enjoyed such elements, but I’m afraid it may be looked with kinder eyes by those who love the lovers, and not those skeptical of the star crossed.