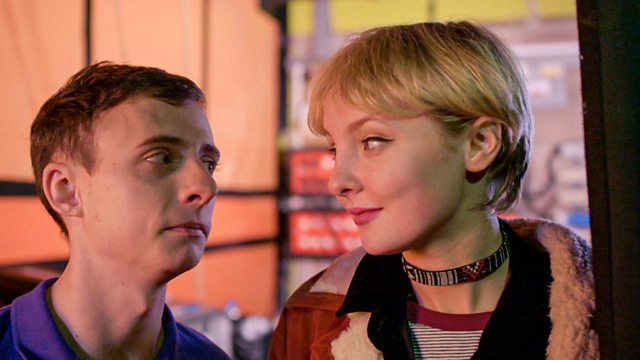 The first original TV drama of 2020 to emerge from Wales is a short one-off piece called Handstand. It may be quirky and slightly clichéd on the surface, but there is a dark underbelly that gradually reveals itself over the course of half an hour. Director Peter Watkins-Hughes has chosen to shine a spotlight on domestic abuse through what is essentially a love story between the hardworking and compassionate Luke (Darren Evans) and his new neighbour Sarah (Mabli Jen Eustace).

Evans and Eustace demonstrate a wonderful onscreen chemistry from the get-go, their characters’ first meeting being the perfect mix of socially awkward and humorously sweet. The telling camera angles and silently knowing looks to one another add to the sexual tension between them, whilst the synth-pop soundtrack and cinema setting coat their relationship in youthful possibility and nostalgic innocence respectively. It is this portrait of young love that makes the turning point in the story all the more dramatic and affecting, as Luke hears the raised voice of Sarah’s father, Alan, resonate angrily through the ‘shockingly thin’ walls of his bedroom. What follows is a moral dilemma centred on the public and private dichotomy, where the question of intervention is explored rather well, given the drama’s brief running time. Christian Patterson is excellent as the two-faced Alan, whose jolly exterior slowly slips away to reveal a manipulative man whose obsession with power and control is ultimately his undoing.

As a stand-alone piece, Watkins-Hughes has created something that is both entertaining and informative. It is also educational insofar as it deals with the subject of domestic violence, thereby reflecting the three Reithian ideals that the BBC was founded on. I believe that this is important to highlight as the BBC and its licence fee comes under increased scrutiny and ever sharper criticism. There is no doubt a conversation to be had about its future funding model, but I believe Handstand is an example of what publicly-funded broadcasting does best, supporting projects that have no commercial value but nevertheless tell important stories that need to be heard. It is also why public service broadcasting is needed, because without it, I fear that the voices wanting to tell such stories in Wales may be bereft of opportunities to do so in a media marketplace driven solely by profit.