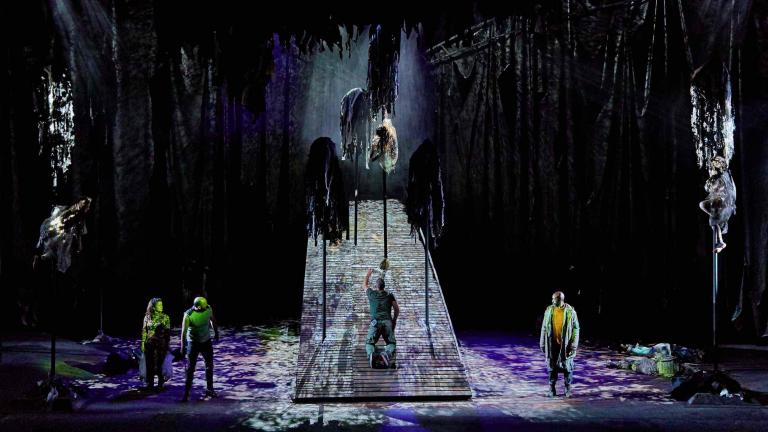 Reviled by many as one of Shakespeare’s more unpleasant plays, and referred to by thespians as ‘The Scottish Play’ because of its reputation for bringing bad luck to performances, Macbeth is open to a huge range of interpretations on account of its deep psychological reference.  Rufus Norris’s interpretation of Shakespeare’s work balances this with an urban modern setting that screams disruption and corruption in high places from start to finish.

For those unfamiliar with the play, Macbeth is a soldier whose wife’s aspirations of greatness proof to be his downfall.  Returning after a successful battle, he meets a coven of witches who predict his speedy promotion and ultimate Kingship.  On arriving home, Macbeth tells his wife, who informs him that Duncan, the present King of Scotland, will be visiting and staying the night – giving an ideal opportunity for the skulduggery which is necessary i.e. the King’s murder. One killing leads to another as both the Macbeths become victims of a bloodlust that lead inevitably to their downfall.

Played out against a forbidding darkly lit set which hardly changes throughout, this production focuses on making Shakespeare’s work compatible with contemporary times, with the obvious intent of the original text becoming more accessible to present day youth.  In this, the National Theatre’s most recent version of Macbeth, it succeeds brilliantly. The parallel with the knife crime so prevalent in today’s society is evident. The fights are, at times, almost too realistic Costume designer Moritz Junge dresses the soldiers including the main protagonists Macbeth and his rival Macduff in combat uniform, while Lady Macbeth is seen in jeans and T-shirt. Set designer Rae Smith uses a steeply sloping ramp for much of the main action in a stark setting.  Even the banquet in Macbeth’s castle is an austere affair.

. BUT – there is a caveat. Some of the poetry and fluency of the memorable speeches is lost, or drowned out by overloud music which adds to a cacophony of sound in some scenes.   And did the three witches really have to climb poles? Having said that, the pluses in this production by the prestigious National Theatre are many. Overall this is good theatre, due in no small part to the acting of Michael Nardone, who projects as a Macbeth in emotional torment yet unable to resist the possibility of ennoblement and its accompanying riches and the blandishments of his evil (soon to become deranged) wife, with disastrous consequences. Kirsty Besterman plays Lady Macbeth as a malevolent sex kitten who has no scruples in using her bedroom wiles to persuade her husband to embark on a wicked course that will lead to his destruction. Norris tackles the wickedness head-on – literally. (Forgive the pun – beheading is part of the on-stage action).

As for light relief:  there is not much of that around, but what there is gets its full due in the hands of Deka Walmsley whose spot-on timing and comedic touch provide a most welcome moment of lightness in this searingly dark tragedy, giving rise to appreciative chuckles on the night reviewed. A welcome moment of respite from the relentless discords of a brutish production that demonstrates that, while we may stop short of beheading in today’s society and guns have replaced swords, in some respects – you have only to consider the fighting in Afghanistan and Syria, for instance – the similarities with our own times are all too apparent.