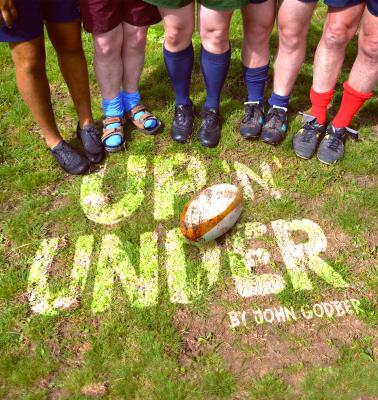 It’s common practise to begin a theatre review with a plot summary. This was not a normal theatre trip for me. This was more of a pilgrimage to see four of my favourite Deaf actors. So for the purposes of this review, I need to introduce my own plot first.

“A forty-six year old British Sign language student travels from North Wales to Manchester to see a play which has Deaf and hearing actors and British Sign Language. Whilst feeling very excited, she is also completely terrified as she will finally get to meet her favourite actors who also happen to be prominent members of the Deaf community. As far as she is concerned, she is off to meet royalty….will it be the stuff of dreams or the stuff of nightmares???”

Three of the actors have previously starred in Small World, which is a sitcom about Deaf people living together. Think ‘Friends’ but with the BSL march, Paddy Ladd and Doug Alker references.

There are four Deaf actors in the production. I first saw Matthew Gurney in ‘Deaf Mugger’ which is old but is still timeless to me (it’s still available on YouTube). If you are a BSL student check it out because I don’t think they will ever show you that in class.

He’s also not to be missed as Mitch the plumber in Small World, for which he quite rightly won an award. Secondly, we have Adam Bassett. I know Adam as the pedantic BSL teacher, also in Small World. There’s a scene in Small World where he tries to correct Mitch (Matthew Gurney) on the sign for Leeds.  Any BSL student will recognise this situation. Being corrected by your tutor and other Deaf people is part and parcel of learning BSL. 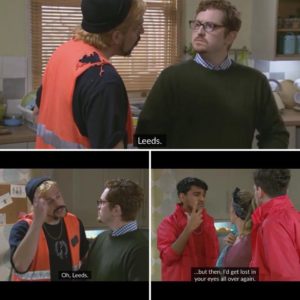 Third in this ensemble is Nadeem Islam, who played Omar in Small world and is also the affable, Tigger like children’s presenter on ‘Up For It’ which is also available on BSL Zone. 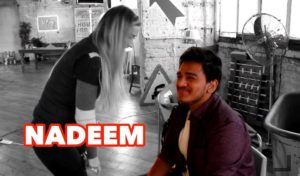 What all of these actors don’t know is that I’ve watched them all in Small World countless times…and regularly in 0.5 slow motion to check their incredibly fast hand movements and facial expressions out. As a BSL learner; I am completely in love with British Sign Language. I watch everything I possibly can to improve my reception skills and handshapes. So up to now I have regularly scrutinised all of the actors I’m going to see on my 48” TV in slow motion. Can you see why I’d be feeling a tad nervous! With all this creepy stalker activity in mind and as I set off from the snowy mountains of North Wales to Manchester to meet these three men, I consider the fourth.

Last but not least…the production (I will get there) also stars Stephen Collins. I know of Stephen because of his work with DH Ensemble, Graeae Theatre Company and Ramps on The Moon. I became particularly fond of Stephen when I saw him in Found (BSL Zone) talking to Emily Howlett about how she found her Deaf identity and began to learn to sign.

It really moved me and I remember thinking how amazing it must have been for Emily to have had the support of Stephen at an incredibly crucial time in her life.

Upon arrival in Salford there was a chance encounter with the cast outside the venue. I know what you’re thinking; strategically planned stalker moves. No – it literally was serendipity. On seeing Adam Bassett…and feeling little BSL student star struck – I instantly start signing Leeds to him, thinking he’ll appreciate the Small World reference. He was courteous and polite and never questioned it, but probably wondered what I was rambling on about. I did manage to briefly talk to him after the show and I think I tried to explain, but being a little giddy from the performance maybe he just still thinks I’m a massive Leeds fan. 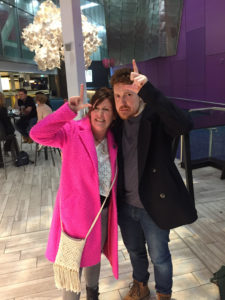 Grabbing a photo opportunity with Matthew Gurney, I remember trying to ask him if it was okay to Facebook these photos, but I’m sure I signed hotel to him…which could have appeared slightly dubious and I’m glad I had already booked my ticket – because mixing the signs for ‘hotel’ and ‘book’ up at that crucial moment could have been disastrous!

Equally as embarrassing after the performance, having recently been shown a ‘Deaf Hope’ video about the importance of sexual health checks which Nadeem had acted in, I found myself talking to him about condoms. Probably not wise as a 46 year and him a young man. I always wondered why people say “Never meet you heroes” now I know why. We often say the wrong thing when we are nervous…. those weren’t my normal conversational signs. Lucky me…. I can now appear idiotic in two languages.

Back to the actual performance…and all joking aside. Fully accessible theatre. An impossibility. Nope – not when it comes from Jeni Draper and the Fingersmiths Theatre Company. The clever use of captioning, voice over and BSL means that this play is literally accessible to all.

“Set up in a bet with his arch rival Reg, our hero Arthur discovers he has 5 weeks to train The Wheatsheaf Arms who are bottom of the amateur rugby league, have never won a game, don’t have 7 players and spend more time in the pub than on the pitch. They are up against The Cobblers Arms, trained by Reg, who are top of the league, train weekly, are physically enormous and terrify every team they play.

Arthur is most worried however about how he is going to communicate with his new team. 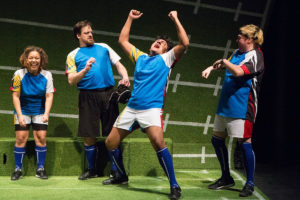 The three hearing actors. Wayne Pickles Norman (Arthur), Willie Elliot (Reg), and Tanya Vital (Hazel) deliver a stunning rhetoric throughout the performance. Reg disappearing often to voice over the audio description. As Hazel, Tanya delivers a powerful Yorkshire narration throughout the performance as she tries to kick the boys into shape, ready for the big game. To keep the Deaf audiences informed; the four Deaf actors take it in turn to deliver the narration in BSL. As I seem to be spending a lot of time watching terps deliver BSL to Deaf audiences at BSL interpreted theatre performances; this had an extra dimension. Knowing that both the English and the BSL had been rehearsed and this wasn’t an interpretation of the words but both languages being performed together gave me an incredible feeling. True equality. It can be done. Kudos. I can only humbly apologise that the three hearing actors don’t feature more prominently in my writing as they were superb but I literally couldn’t peel my eyes away from the BSL. I wanted to write more about the hearing actors but I literally didn’t watch them; but let it be known that it’s no reflection of their work.

Matthew Gurney plays Frank. At one point we see him leaning on an imaginary oxygen tank and acting a scene which was reminiscent of the old black and white silent films. Matthew’s ability to morph his face into what can only be described as grotesque features is a skill I believe only accessible to him and Jim Carey. Throw in Buster Keaton with some good old fashioned slapstick and visual vernacular (which I think can only be perfected by pure BSL users) and we have a character profile for his acting. He also provided plenty of sly jokes for the Deaf community directed at hearing people which the untrained eye would have missed. Being able to understand all these subtle nuances is yet another reason I love knowing BSL. 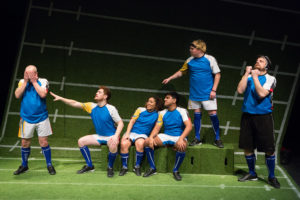 Adam Bassett (Phil) also didn’t disappoint. His dream sequence was mesmerising. Deaf storytelling is something I know I will ironically only ever be able to dream about.. Deaf storytelling is an art in itself and my companions and I lapped it up. There was no need to sign that we were gobsmacked to each other; our mouths agape, we literally were. 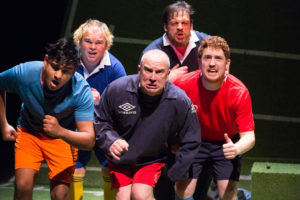 There were too many highlights to mention from both Stephen Collins and Nadeem Islam, who were both visually stunning. Lookout for Tony’s (Nadeem) explanation of how someone procured a broken wrist and the clever use of Reg’s sign name. At times during the production I was genuinely worried about the amount of alcohol that Stephen Collins (Steve) drank and wondered if his character’s name had been given to him as he’d taken method acting too far.

I didn’t expect all the dancing. Those boys can throw some shapes between them and I didn’t expect it; maybe the boys will pop up in Swan Lake next. My BSL tutor has often told me that he’s accused of pretending to be Deaf by hearing people when he goes clubbing and dances. Again, if you hang around with Deaf people and spend time in the Deaf community you will know this to be a ridiculous statement; it just highlights a lack of Deaf awareness.

The build up to it and the penultimate rugby match itself was a sight to behold. I go to the theatre with the hope that I can suspend my disbelief. Crafty use of acting and shrewd use of costumes during these penultimate scenes meant that I was able to do just that. I genuinely felt like I was at the match; I was terrified of the mighty Cobblers and rooting for the underdogs – The Wheatsheaf Arms.

There is unlimited scope for this kind of theatre. It should have happened years ago. Unfortunately for various political and historical reasons, it hasn’t. However, collaboration between us all is paramount to moving forwards. This play highlights not only the divide, but the endless possibilities of us all working together. I honestly can’t see any other way forwards. I especially implore BSL students to go and see this; put down put down your 2D BSL files, stop anything else you are doing and go and watch Up ‘N’ Under in glorious 3D…I guarantee you will not be disappointed.

Janine Hall with  Adam Basset, Up and Under cast member.