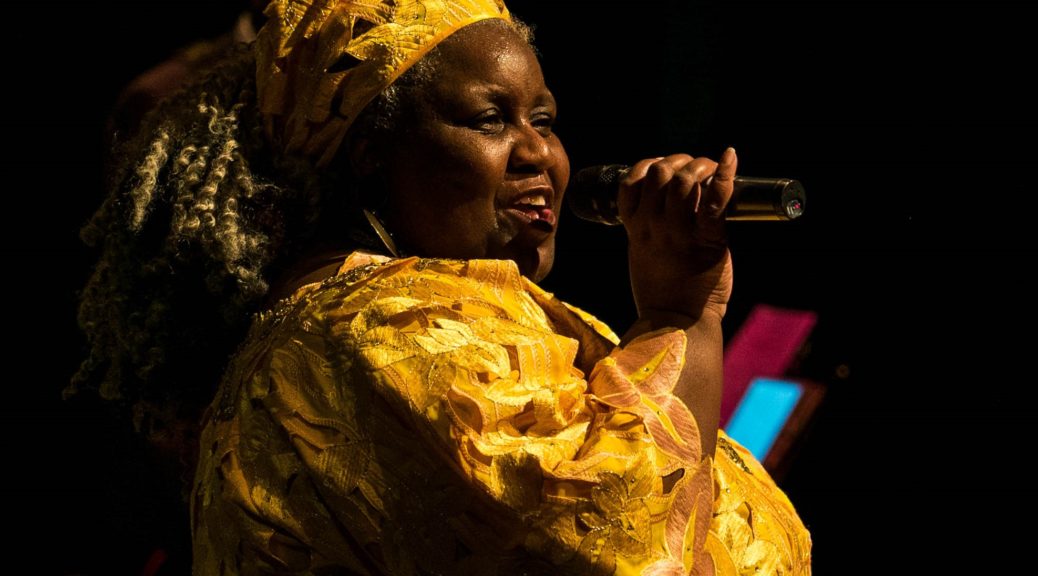 Behind ‘Rush’ lies a simple theme.  This is my story.  This is where I come from, this is why I came here.  This is what life is like for me here.  Here is my story told through the universal medium of music.  We all have a story like this, and to a degree every story is engaging because people are interesting.  It is just that some stories are more interesting than others and this one involves three continents, colonization, death of an indigenous people, brutal slavery, rebellion, warfare, migration and racism.  Welcome to Jamaica and its tour of Britain, February 2020, destination Mold.

We were promised a joyous Jamaican journey and judging by the fact all bar a handful of people in a crowded theatre were on their feet at times, this is what we got.  Even my left knee was shaking in time to this rhythmic feast despite my pathological phobia of dancing.  The fact that I was pinned back in my seat to avoid the gyrations of the lady standing next to me did not detract from the spectacle.  Sometimes it is just great to see people join in with unfettered enthusiasm.

Yet here was a contradiction.  This story is far from joyous, it is tainted with more than a bucketful of blood, sweat and tears and while this was pointed out with a wry sense of humour, this was not what we heard. Instead we were treated to an endless list of Jamaican song encompassing a brief history of ska and reggae with songs from Jimmy Cliff and Desmond Decker amongst a host of others.  Special mention was made of Bob Marley who would have celebrated his 75th birthday this week and who played Deeside Leisure Centre in 1980.  It’s a small world.  There were some surprising sounds, ‘The tide is high’ is so heavily associated with Blondie that many have forgotten its Jamaican roots.

The music was performed with distinction by the JA Reggae Band, all of whom were consummate musicians orchestrated by the lead guitar and musical director, Orville Pinnock. True to the development of ska in particular, the band was racially diverse with a rich tapestry of experience from different musical genres.  They were ably supported by DJ Paul who played a variety of tracks supplementing a long set.

The two lead singers IKA and Janice Williamson both had rich, powerful voices that were adaptable to a range of song.  My particular favourite was the gospel standard, ‘Oh Happy day’ acknowledging church influence on the Jamaican community.  The story was introduced and narrated by John Simmitt, who did so gently, rhythmically yet with a waspish sense of humour.  One pleasing aspect here was that there were no ‘stars’ in this ensemble, just a team working closely together who so obviously enjoyed and entered into the musical feast they presented.

My question is, how important is the Jamaican story?  This, and others like it should be a staple in every secondary school curriculum.  It speaks volumes to us about our national identity, our historic legacy and comments forcefully against those xenophobic elements in our society that seem to have found a voice in the past few years.  From the brutal colonization of the 15th and 16th Centuries, the loathsome practice of transatlantic slavery to the shocking betrayal of the Windrush generation by a populist government pillorying immigrants to win votes, this story reeks of injustice.  I would have liked to see more historical narrative, to learn more about the Maroon rebellions and leaders such as Marcus Garvey and Paul Bogle instead of being satisfied with allusions to these events and people.  But increasingly as the show developed it was a celebration of music that has its roots or was influenced by Jamaica.

Perhaps the most important theme of the show was to emphasise the fact that the presence of Black and Asian communities in the UK is the result of a direct invitation to live here by the British government after World War 2.  Once people arrived, despite a pernicious level of racism these communities have integrated into, influenced and enhanced our society.  The reception given to 2-tone music and the energy generated by numbers by The Specials and Madness was a prime illustration of this.  Similar statements could be made especially about those communities from the Indian sub-continent who have made their home here.  Few people prior to 1960 would have heard of Tandoori chicken, yet to some, this is more of a national dish than roast beef and Yorkshire pudding.

These communities are building their own cultural legacy now, a great example being the Notting Hill Carnival, one of the biggest street festivals in the world, attracting over 2 million visitors each year.  The carnival in itself is unique, being a fusion of Jamaican reggae and Trinidadian steel band and is now officially a British cultural icon.  Perhaps we have forgotten the roots of this carnival lie in a response to racial attacks on West Indians.  Few have heard of the 1959 death of Kelso Cochrane at the hands of white youths.  And few will know that the perpetrators were never charged or convicted for fear of the public unrest that may incite.  This was despite the fact that the identity of the killer was an open secret in the local community.

This demonstrates that we have a lot to learn from this history yet despite such a powerful message it was not the key theme of the evening.  There was no axe to grind, no bitterness at this shameful treatment.  Just a nice line of humour poking fun at people like Enoch Powell and his ‘Rivers of Blood’ speech.  The Conservative club in his former constituency is now a West Indian Cultural Centre.  How times have changed.

The pervasive theme of the evening for me was the rhythm which permeated every song, energised the audience and left people with a feel good factor.  It was remarkable that a mainly white, middle aged, middle class audience found such movement and joy in this Caribbean cultural festival.  John Simmitt joked that the audience might be better suited to a cup of Milo or Horlicks before bedtime but this was far from the case.  The audience warmed to the rhythm with gusto.  Full credit to the cast, who after taking their bow made their way to the foyer to greet the audience as they left.  After three hours of performance they need not have done this but was a most welcome end to a fabulous evening.

Go and see this performance.  Feel the rhythm, enjoy the music, learn the history.