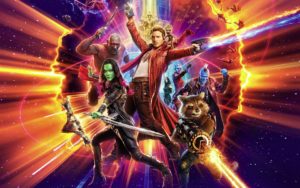 (4 / 5)
This movie is an example of the age that we, as a movie audience and MARVEL Studios are living in right now. There is an audience that is not so stuffy that can accept weird and outlandish concepts, characters and images and a studio that has accumulated enough capital that it is willing to spend money and delivery on them.
We get our Guardians of the Galaxy back for this movie. Chris Pratt is Peter Quill/Star Lord still a handsome well meaning fool. Rocket (Bradley Cooper) that’s still so tech savvy and can piss of anyone within a few moments of being in their company. Also still an amazing C.G.I. accomplishment. Drax (Dave Bautista) who might just get the most and biggest laughs from me this time, speaking his mind, no matter how uncomfortable or offensive it might be. Gamora (Zoe Saldana) who’s more defined here, she is the level headed one and the stern fighter. Finally is Baby Groot (Vin Diesel) still growing from the last movie, a really cute design that will probably sell many, many toys.

Our opening sequence is our Guardians defending batteries from, some kind of energy eating monster. They take it down eventually, though a more coordinated team would have been able to do it better, and receive their reward from a species of gold-skinned humanoids. Though Rocket has kept a few batteries for himself, which displeases them greatly.
This comedy style can be described as wise-ass, the characters constantly poke fun of their situation and other characters in the world. It helps by not taking itself too seriously, which would be a struggle with characters and visuals this wild and ridiculous. Some of the gags go on too long, with one character not hearing or completely misinterpreting what the other said so it all has to be repeated with rising frustration. This is milking a scene however it almost plays into the comedy, it’s funny that they don’t have to be stingy with their special effects and have a scene play-out.
These movies have distinguished themselves in their lavish production value. No other movie can I think of that has brought to life such crazy concepts with such care and skill. Having bars and ships filled to the brim with all these different alien designs and meticulously designed sets that vary from pristine palaces to dingy, leaky slums.
In the last movie Peter has a cassette tape of hit songs from the eighties and before. At the end of that movie he got the next volume, so this movie once again is filled with catchy songs. They’re not all as recognisable or as catchy as the first one, but I think they fit the themes of the moment they’re played in better.
There’s a lot less going on in this movie. Less characters and less intertwining narratives, the whole thing is more focused and consistent. I criticised the first movie for wanting to reach emotional placed but never being confident enough to go there. This one has short, but sincere moments of emotion but never tries to go too deep with them and are nearly always book-ended with comedy so the whole thing is much more consistent.
In nearly every MARVEL movie Stan Lee has made a little cameo appearance. It’s been something cute for the fans to see and develop theories for. Well here, he makes a cameo again and they do something special with it. What it is I wont dare spoil, but it’s good.
This is a franchise that never excelled in it’s depth of a story, profound message or even something philosophical. No it’s strength is in it’s incompetent, but fun characters and visuals. It strikes that great genre piece that made the eighties an enjoyable decade, colour and fun.